Please ensure Javascript is enabled for purposes of website accessibility
Log In Help Join The Motley Fool
Free Article Join Over 1 Million Premium Members And Get More In-Depth Stock Guidance and Research
By Rich Smith – Nov 11, 2015 at 10:46AM 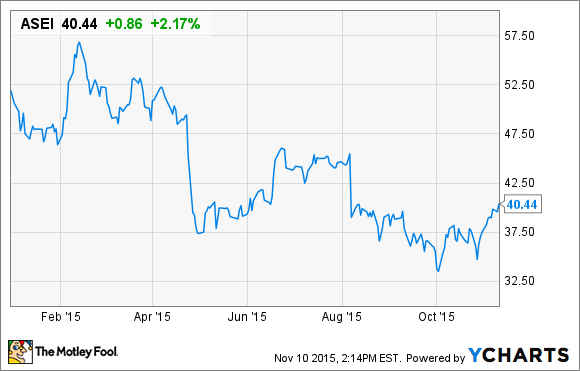 AS&E shares are down for the year. But at today's price, I wouldn't count them "out." ASEI data by YCharts.

Investing money in shares of X-ray security specialist American Science & Engineering (ASEI) is always an exercise in guesswork. The company famously refuses to provide guidance on what it might earn in any future quarter (or even year), requiring investors to evaluate the stock on what it's done, rather than what it promises to do.

That's not necessarily a bad thing. But for better or for worse, it makes every earnings report feel a little bit like Christmas. You really have no idea what's going to be inside the box till you've untied the ribbon, ripped off the wrapping paper, and looked inside. So let's do that.

Good news from AS&E
American Science & Engineering (habitually referred to as AS&E because its name is just so darn long) reported financial results for its fiscal second quarter 2016 on Monday. Analysts had predicted that AS&E would deliver $0.08 per share in profits and $25.1 million in revenues for Q2, and surprisingly, they hit pretty close to the mark this time:

Now, obviously, $0.06 wasn't as good as the $0.08 that Wall Street had been expecting. But given that AS&E gave the Street analysts little help in working up their estimates, and considering that last year, AS&E's Q2 results featured a $0.49-per-share loss, investors took the news of the "earnings miss" in stride. Shares are now trading up more than 2% from pre-earnings levels, even as the broader stock market continues to be in the red.

Also working in AS&E's stock's favor this week is the company's report that it generated $8.7 million in positive free cash flow in Q2. Year to date, that puts FCF at $2.6 million (versus $26.9 million in cash burn through H1 of fiscal 2015). What's more, if you add up cash produced in this year's H1 and last year's H2, the company has now piled up about $15.8 million in positive free cash flow over the past 12 months.

Valuation
Is that enough cash to make the stock a "buy"? Perhaps.

Divided into the stock's $291 million market cap, AS&E stock now sells for about 18.4 times FCF. That's a whole lot cheaper-seeming than the stock's P/E ratio, which currently stands at... 85.5. Analysts (again, working off only minimal guidance, so take this with a grain of salt) on S&P Capital IQ predict that AS&E will continue growing its profits at about 14% annually over the next five years, and AS&E currently yields a generous 5.1% dividend on its stock.

Given all this, I'd have to say that 18.4 times FCF actually does look like a pretty good price to pay. The more so when you recall that debt-free AS&E has more than $82 million cash in the bank, which has the effect of making the stock even cheaper when valued on its enterprise value (for anyone interested, the EV/FCF ratio works out to just 11.4).

Long story short, as long as AS&E keeps the cash flowing, it looks like a good bet to me.

Rich Smith does not own shares of, nor is he short, any company named above. You can find him on Motley Fool CAPS, publicly pontificating under the handle TMFDitty, where he's currently ranked No. 299 out of more than 75,000 rated members.

Is American Science & Engineering Stock Selling Out Too Cheaply?

American Science & Engineering Inc. Earnings: 1 Number Tells You All You Need to Know