Please ensure Javascript is enabled for purposes of website accessibility
Log In Help Join The Motley Fool
Free Article Join Over 1 Million Premium Members And Get More In-Depth Stock Guidance and Research
By Adam Levine-Weinberg – Aug 14, 2015 at 10:25AM

GoPro stock is now selling for less than its price before its most recent blowout earnings report.

After plummeting early this year, shares of GoPro (GPRO 3.64%) finally got back on track in March. A strong Q1 earnings report and Q2 guidance released in April helped the stock rise further in the following months, while another big beat and raise in July added more momentum. 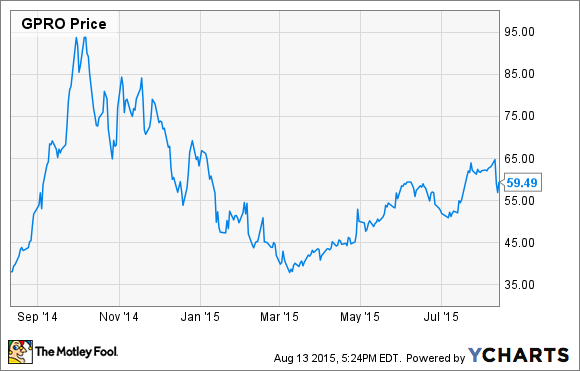 Yet the broader stock market sell-off catalyzed by China's surprise currency devaluation this week caused GoPro stock to tumble 12% in just two days before recovering somewhat on Thursday. With the stock now trading at last month's price, investors have been handed a great opportunity to buy a compelling growth stock at a very reasonable valuation.

Another huge quarter
Last month, GoPro reported that revenue reached $420 million in Q2, beating the company's guidance of $380 million-$400 million, which was in turn well above the average mid-April analyst estimate of $332 million. GoPro's adjusted EPS of $0.35 came in far ahead of GoPro's $0.24-$0.26 guidance, and was more than double the $0.15 that analysts had been projecting just a few months earlier.

GoPro provided stellar guidance, too. The company expects revenue of $430 million-$445 million and EPS of $0.29-$0.32 for Q3. Once again, the guidance was far ahead of the analyst consensus of about $401 million in revenue and EPS of $0.22. And based on GoPro's recent track record, it seems like the guidance was probably quite conservative.

Thus it's not too surprising that GoPro stock has risen as high as $65 in the weeks following the Q2 report. Yet thanks to the recent sell-off, the stock is now cheaper than it was before investors got this huge dose of good news.

GoPro has plenty of short-term and long-term growth drivers that should keep earnings rising quickly in the quarters and years ahead. In the past few months, it has launched two new products: the $299 mid-range HERO+ LCD camera and the ultra-compact $399 HERO4 Session.

Solid demand for these new models, as well as growing distribution, should bolster GoPro's sales in the second half of 2015. GoPro could also potentially refresh the high end of its lineup before the holiday season.

Longer-term, GoPro has announced major plans to enter potentially lucrative adjacent markets within the next year. It is growing its media presence by starting to license GoPro videos for commercial use, it will start selling six-camera and 16-camera spherical rigs to capture virtual reality content, and it is developing a quadcopter drone to be the "ultimate accessory" for a GoPro.

No reason to fear China
Despite all these positive drivers, investors have punished GoPro stock mercilessly this week due to fears about China.

It's true that China is starting to become an important market for GoPro. In the company's Q2 earnings report, it revealed that China was now a top-10 market for GoPro. Still, that implies that there are plenty of markets ahead of China in terms of sales. The whole APAC region -- which includes a lot of countries beyond China -- accounted for just 17% of GoPro's revenue last quarter.

Furthermore, China's economic slowdown didn't just start this week. It has been an issue this whole year -- and that hasn't stopped GoPro from posting rapid sales growth there thanks to its strong and growing brand awareness.

GoPro stock is surprisingly cheap
Despite GoPro's stellar growth this year and strong prospects -- driven by the continued growth of the action camera market and the company's moves into adjacent markets -- GoPro stock is hardly expensive.

At its Thursday closing price of $59.50, GoPro trades for just 32 times projected 2015 EPS. Considering that analysts have consistently underestimated GoPro's sales and earnings power this year, it wouldn't be very surprising if full-year EPS comes in substantially higher than the $1.85 that analysts currently expect. That would make GoPro stock look even cheaper.

Of course, a valuation of 31 times earnings puts GoPro well above the market average earnings multiple. But GoPro is hardly an average company. Revenue rose 63% year over year in the first half of 2015.

While that level of growth isn't sustainable, GoPro is poised to grow faster than all but the few most successful companies in the U.S. over the next five years or so. That means investors have a rare opportunity today in GoPro stock -- companies with this kind of growth potential usually trade at dramatically higher earnings multiples. Growth-seeking investors should strongly consider getting in near the ground floor today.