One of the great differentiators in the solar industry today is having a low cost of capital. Low capital costs mean you can bid lower prices for energy contracts to win projects, and even make higher margins than competitors.

SolarCity (NASDAQ:SCTY.DL) has been one of the most creative in finding ways to fund its billions of dollars in annual solar installations, and as it grows, those funding needs will grow, as well. But there are some curious trends forming in some recent debt offerings.

The curious case of the rising cost of capital
One of the most highly anticipated financing innovations in solar energy was the securitization of customer payments. SolarCity was the first to offer such a financial product in November 2013, and it promised to lower the cost of the company's capital even further.

For a time, the cost of capital did fall, as you can see between securitizations one and three. But a recently released fourth securitization reverses that trend.

A small change in interest rates wouldn't normally be alarming, but the fourth securitization was actually set up to have a lower rate than the third -- not higher. Here are the three things that concerned me about the rising rate.

I've included the yields for five- and 10-year bonds between the date of pricing securitizations three and four to show the main concern I have with SolarCity's rising rate. 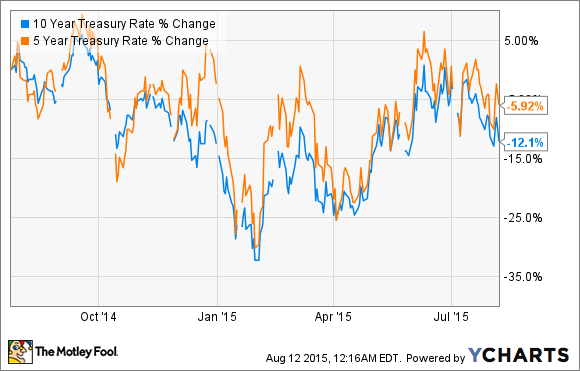 Are rising costs the norm?
The rising rates for SolarCity's securitizations of cash flows comes as it has leaned on another Elon Musk company, SpaceX, to fund its loan program. SpaceX has invested $165 million in solar bonds to fund solar loans, and the company has still had to increase the rate it offers to get customers to buy these bonds.

Initially, the company offered $200 million in solar bonds to the public at an interest rate of up to 4% for seven years; but the 4% offer is now for five-year bonds, and 10 years are at a 5% interest rate. And if $165 million of the $200 million in bonds have gone to SpaceX, that means there's not a lot of demand for these bonds from retail customers.

No matter where you look, SolarCity's cost of doing business is going up. That's a concern given the fact that benchmark interest rates have been in decline during the past year, and solar energy has become more mainstream -- which should indicate falling costs of capital.

What to make of SolarCity today
There could be a number of things at play that make SolarCity's cost of capital higher than it was a year ago. Oil prices -- as unrelated as they are to solar energy -- could be impacting borrowing rates like they're impacting stock prices.

I also think that SolarCity is finally starting to see the market ask for proof that cash flows and profits will be where management says they'll be. Growth is great, but if you're piling on debt and reporting massive losses, then investors will eventually ask for higher rates of return. That could be what we're seeing today.

SolarCity needs a lot of debt to fund its growth ambitions. If the rates that return investors are commanding now are going up, that doesn't bode well for the company. At the very least, rates of interest are something investors should be watching closely.