It should come to the surprise of no one that BP's (NYSE:BP) quarterly earnings didn't turn any heads on Wall Street. Even without the several billion dollar asset impairments and writedowns it took last quarter, earnings from upstream production declined more than 90%! So the number's weren't great, but BP's management thinks that today's rugged results are hiding some of the brighter things ahead for the company.

Here are five things that management highlighted in its recent conference call that it believes every BP shareholder should know.

1) The post Deepwater Horizon period has begun
This past quarter was a watershed moment for the company because it had settled a vast majority of the cases related to the Deepwater Horizon spill. While $18.7 billion over an 18 year period is a big chunk of change, BP's CEO Bob Dudley believes it does give one benefit for BP's shareholders:

It has been a very important quarter for BP. We reached agreements in principle in the United States to resolve the largest remaining liabilities in relation to the Deepwater Horizon oil spill. This has been recognized as a landmark step forward by all parties and leaves us all able to chart a much clearer course for the future.

Those last couple of words are extremely important because lack of clarity in regards to the Deepwater Horizon spill has been one of the biggest question marks surrounding BP's stock for years. Now that shareholders know exactly what the company faces in terms of dollar amounts, it gives the company a little more financial wiggle room for future development.

2) Reduced costs without too much sacrifice for the future
With oil prices in the doldrums, oil companies have a choice to make: Cut spending now to conserve cash and not raise capital, or keep capital spending levels going and fill the funding gaps with debt. Neither one is ideal, really. If you cut spending, you risk not having enough projects in the development pipeline for years down the road. If you keep spending going, you risk blowing up the balance sheet with debt. In the case of BP, management thinks it can have the best of both worlds by forcing some of its suppliers and contractors to bear some of the costs. As Mr. Dudley put it, BP can cut costs without compromising too much of the future thanks to cheaper rates from oil services companies:

We now expect our organic capital expenditure to be below $20 billion for 2015 compared to our guidance back in a $100 world of $24 billion to $26 billion. This is being achieved, for this year, largely through rephasing and paring back of marginal activity, but we're also seeing benefits from deflation. Industry commentary suggests offshore costs are reducing rapidly, and this is consistent with what we are seeing in our supply chain. This gives us confidence in sustaining a lower level of capital spend over the medium term while maintaining the same growth aspirations.

Declining offshore rates for BP are critical because a much larger portion of its current and future production is tied to offshore development in places such as the Gulf of Mexico, West Africa, and the North Sea. If the company can get significant savings on contracts for the equipment and services related to the development of these resources, it should help BP navigate today's climate without being left with an empty project quiver several years from now.

3) We believe climate change will significantly impact our business ...
Oil and gas companies have historically been some of the largest opponents to the idea of carbon emissions being linked to climate change and the potential harmful effects. And when they have acknowledged the link, it normally is with an "it won't change what we do" sort of response, but according to Mr. Dudley, it's becoming a bigger and bigger component of the company's decision making process.

[I]t's clear that carbon pricing and carbon emissions are going to be the focus of the world. We think having that reduced carbon footprint is going to be a good thing, but we're certainly not abandoning the oil and gas industry or the oil industry ... We think that the world really does need a framework to work within, number one, should be energy efficiency because that is the biggest single lever in terms of reduced emissions. And after that, a carbon pricing that can be used by the world where the proceeds from that don't just go into the general funds of the world but actually move to solving the transition to lower carbon energy over many decades. And we've taken a position on that with now 11 other companies in an oil and gas climate initiative. It's going to be part of the focus.

Now some might see the company's position on efficiency as a cop out on their end since it doesn't really put the onus on oil and gas companies to make any changes to their business models. However, energy efficiency could have a much larger impact on BP's long term business than you might think. Consider this chart: 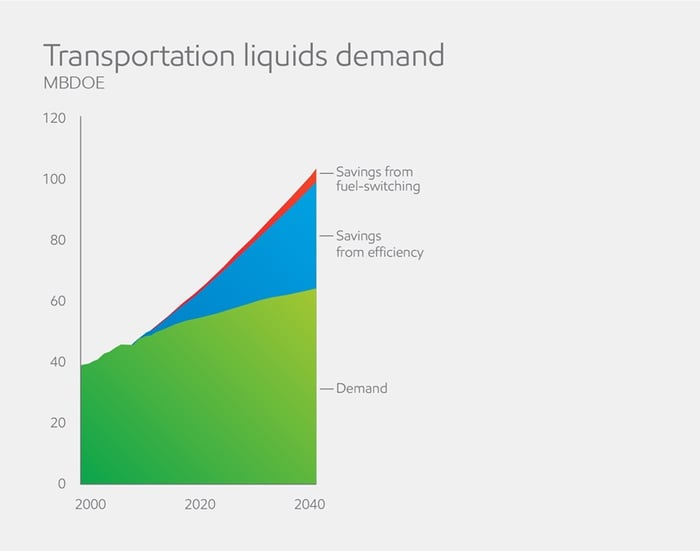 Through anticipated gains in efficiency in the transportation sector, we could reduce global future demand for oil by 70%. A company that is advocating for policies that could wipe out 70% of the growth in its own business isn't as much of a cop out as it seems.

4) ... and we're changing our production portfolio because of it
It's nothing new for BP or some of the other major oil companies to acknowledge carbon emissions' link to climate change, it's just that normally companies don't do much about it because the business of producing oil is still a lucrative one. However, there are some noticeable changes coming for BP's long term production portfolio that are in some ways a reflection of its view on climate change, as Mr. Dudley explains.

[W]e have just moved past the 50% -- we're roughly right now at 50% of our portfolio in terms of production is now gas versus oil ... So down the road, by the end of the decade, we'll be between 55% and 60% gas when the Oman projects and Shah Deniz projects come on.

Look, we can't expect oil and gas companies to become major players in the alternative energy space. Over the past several years they have tried getting involved in it and have been pretty lousy. However, from a carbon emissions standpoint, natural gas is a significant improvement over oil and coal. BP is starting to recognize this, and a push toward more natural gas production might be a signal that it is actually expecting some of those carbon pricing mechanisms to be in place sooner rather than later.

5) For the company, it all comes down to dividends
As a stock, BP knows exactly what it is. Investors aren't buying into shares looking for huge revenue or earnings growth, they are looking for a stable company that can consistently churn out extra cash it can give back to shareholders in the form of a dividend. So Mr. Dudley made it eminently clear this past conference call that the dividend was a major priority for management. Here's just one example of that.

It is a challenging time for our industry, but I remain confident that moving quickly to simplify and reset the company for a sustained weaker environment is the right thing to do for all seasons. I believe we've made a good start. We are staying very focused on operational delivery. We're working steadily to complete our planned divestments, and we are resetting capital and cash costs in the way that drives sustainable efficiencies. This supports our efforts to rebalance our sources and uses of cash and ensure we can sustain our dividend. This is the clear priority within our financial framework right now.

BP's current dividend yield of more than 6.5% suggests that a lot of investors are leery of BP's ability to pay that dividend long term through operational cash generation. They have a point, up until last year the company wasn't even able to meet all of its capital spending obligations without raising capital, and that was with $100 oil. However, management believes that within 2 years it will be able to right the ship and generate more than enough cash from operations. So we'll have to wait and see if those cost saving measures it has implemented will be able to make up the difference.