Whole Foods Market (NASDAQ:WFM) and Lululemon Athletica (NASDAQ:LULU) have more than a little bit in common. Both companies are considered lifestyle brands, meaning their customers choose to support them in part as a reflection who they are and their lifestyle choices.

Both companies also attract a similar customer -- a health-conscious, high-end consumer who is likely a woman. For this person, Lululemon is the outfitter of choice for exercise clothes, while Whole Foods is the destination for groceries.

From an investing perspective, the two stocks have also taken similar paths. In the heady days following the recession, both stocks were market darlings, growing several times over. However, over the last couple of years the two companies have seen rising competition sap their growth, and have experienced some self-inflicted problems, sending their stocks downward. 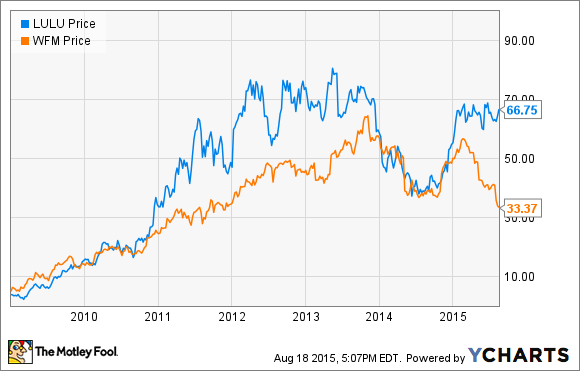 As you can see from the chart above, the two stocks both began to dive in late 2013, but while Whole Foods shares sank to four-year lows recently, Lululemon has recovered most of its losses. Could the organic grocer learn something from the yoga star's comeback? Let's take a closer look.

A good stretch
Lululemon's shares jumped more than 50% over a three-month span from October 2014 to January 2015. There was no major catalyst to those gains, but a combination of lowered expectations, excitement about new products, and modestly improved financial results helped drive the stock higher.

Shares gained 9% the day the company's third-quarter earnings report came out, and continued to move higher over the coming days. In January, a better-than-expected holiday sales report followed by a round of analyst upgrades helped lift the stock to its current levels.

At its nadir, Lululemon shares were trading at a P/E of just around 20, the same as Whole Foods' today, which seemed to indicate a buying opportunity for a company of Lululemon's growth potential. Among the items driving Lululemon higher were excitement about its men's line and growth in its ivivva girls stores, along with positive traffic across all stores. Though its reputation suffered from a pants recall and offensive comments made by its founder, the company finally seemed to be returning to consistent growth.

One tough nut
While it may be hard to imagine Whole Foods bouncing back in a similar fashion, the biggest advantage the company has is that analysts have lowered their expectations, meaning that even a modest improvement could put shares back on the rebound. Just as Lululemon's problems were in part self-inflicted, so Whole Foods admitted that a weights and measurements investigation in New York and the negative publicity surrounding it had a material impact on comparable sales this past quarter.

As Whole Foods adapts to the more competitive marketplace, implementing new concepts like home delivery and its smaller 365 store, which will begin opening next year, comparable sales should recover form the measly 1.3% the company reported last quarter.

The supermarket chain still has a promising pipeline of new stores opening up and average weekly sales continue to move higher, a sign of demand for more stores. With that kind of momentum, the company is stronger than its stock slide would have it seem. Like Lululemon, Whole Foods remains a strong brand with a loyal following, though unexpected competition has knocked it off its perch.

At a P/E of 20, the stock is cheaper than the S&P 500 and that of rivals. Considering that management still believes it can triple its store count, that valuation seems like a mistake. As Lululemon's comeback shows, stocks like these can quickly fall back into the market's good graces.