The management teams at integrated oil and gas majors like Royal Dutch Shell (NYSE:RDS.A) (NYSE:RDS.B) have a difficult job. They need to convince investors and analysts -- people that expect results over relatively short-term timelines -- to look well into the future to see the value in the company. So on the company's most recent conference call, here are some of the things that management wanted to highlight that would appease the shorter-term thinkers while keeping its eye on the long term.

1. We're cutting costs across the board to become more competitive
A major component of being successful in the oil market today is squeezing out as much operational costs savings as possible. Savings on the day to day operations of the company are most effective because they create value today without compromising the future through reduced capital spending. In this front, CFO Simon Henry highlighted that the comapany has enacted some major cost cuts in the past 12 months.

Our cost this year and on a rolling 12 months to now, down $4 billion, 10 percentage points. These are sustainable cost-reduction programs. They're not just deferring training and travel. Exchange room -- rate movements have been supportive. But as we go forward, we expect more, and they will not depend on exchange rate movements.

$4 billion is a pretty impressive amount to cut from operations, but keep in mind with a company the size of Shell that is a 10% cut overall. It helps, but it is nowhere near the 50% decline in oil prices over the past year or so that has affected revenue.

2. We're making some adjustments to capital spending, but not too many right now
For the past two years, Shell has actually been significantly reducing its capital expenditures -- well before we started to see the decline in oil prices. However, Mr. Henry wanted to remind us that even though the company is perhaps shifting some of its capital plans around to delay a project here or suspend a longer-term project there, it still plans on making rather significant investments over the long term.

So the final lever I'd like to mention, this is a pretty obvious one, but it is being lost in some of the headlines at the moment. Our core business model is developing new sources of oil and gas because that drives our cash flow and free cash flow over time. If we stop doing this, then we might as well pack up and go home...We've made some adjustments to the FID [final investment decision] pace, but we are completing the existing program with a pretty attractive growth pipeline, predominantly in the Upstream at the moment. Portfolio is geared to give the uptick in production, but much more importantly, to the cash flow from ops and the free cash flow in '17 and beyond. We picked 10 projects here, they are all pretty much the largest, 4 are already on stream ramping up and the other 6 not yet on stream.

Almost all of the oil and gas majors use 2017 as their benchmark years for completing their current capital programs. As we get closer and closer to that date, we will start to see some of the new projects that will come into focus.

3. Our new projects will deliver lots of free cash flow if this happens...
One element that Shell has focused on in recent years hasn't been on actual production targets, but instead just bringing online the projects that will deliver substantial cash flow to the company. As Mr. Henry pointed out, the company believes that the major projects it has been working on since 2012 and before will result in $8 billion in free cash flow by 2020. 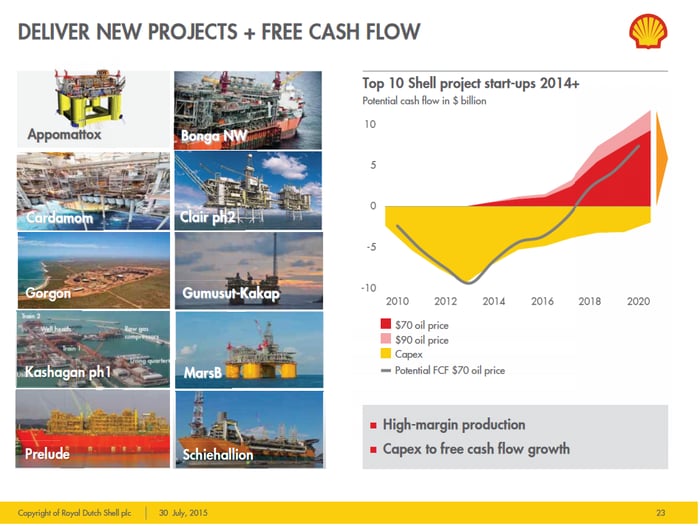 You can see, hopefully, the graph is self-explanatory, but they move from effectively, a $10 cash deficit in 2013 period per year to a potential $10 billion cash surplus by the end of the decade. It will be round about an $8 billion cash surplus, even if the oil price is only $70. This is a pretty strong project flow, great complementary fit with our new colleagues in BG [Group], where they're going through the same shift from investment through to free cash flow, but about 2 years in advance, Brazil and Australia, for example, helping them.

The one element that may throw caution to the wind for some investors is that for this plan to work, the price of oil will need to average $70 per barrel. Perhaps that happens, perhaps it doesn't, but a $8 billion free cash flow cushion at $70 per barrel seems to suggest that there is some wiggle room there.

4. We foresee the future as a gassy one
One thing that really stood out this past quarter was the company's stance on natural gas and its future potential for the global market.

And gas is the fuel of the future. It's affordable, there are secure supplies available and it is a low carbon source. That is driving the growth. Maybe there's a wobble, 1 or 2 years, but that's not what we're investing for. These are 30, 40-year projects with not that much ongoing investment beyond. -- Simon Hnergy

Based on the company;s major investments in LNG, though, it's not that surprising. A major reason that it is purchasing BG Group is because the company has a pretty sizable LNG portfolio that should integrate well into Shell's LNG investments. However, CEO Ben van Beurden wanted to make it clear that for LNG to be successful, the company will need to drive down its costs:

If you want gas to succeed as the fuel in the future, it is just not good enough to say, "Hey, it's cleaner than coal," et cetera, et cetera. It also has to be affordable. And indeed, if LNG is going to be the fastest-growing component in the gas mix, you better make sure that the LNG is also competitive at lower price levels.

This is becoming an issue with new LNG projects. They are becoming more and more expensive to build. Mr. van Beurden did also mention that the company was looking tat some standardization processes across its LNG development projects should bring some major cost savings.

5. Efficiency in shale will only go so far
Over the past year, shale drilling in the United States has been much more resilient to the drop in oil prices because of gains in efficiency that have significantly cut costs. This led to some analysts wondering if the cost-cutting measures in shale have not only ensured that it will stick around, but could actually mean it will keep oil prices at where they are today for several years down the road. In response to this, Mr. van Beurden wanted to ensure analysts that efficiency gains are happening, and that there are some other factors that could prevent shale from keeping prices down that long.

Now what does that mean for the entire industry? Can the entire industry see the same trend? Well, I'm sure they are. As a matter of fact, they have to, otherwise they won't survive. Will that mean that basically there is such a big new reservoir of new oil opening up that we can sort of see the oil price going down for another triple dip and for years to come? I don't know. I don't think so, actually. Because at the same time, if you look at how many of the independents are doing from an overall financial perspective, it doesn't look good. The individual well economics may be interesting. But the overall integrated economics, including the whole infrastructure to be evacuated, doesn't look very good.

This is something to consider when looking at companies in the independent space today. The economics on a well-to-well basis might suggest that they can survive at lower oil prices, but that doesn't include the investments in infrastructure to get that oil and gas to market and therefore the growth at today's prices will be constricted to existing infrastructure. Perhaps he is right, perhaps not. But it appears that Shell will be basing some of its investment decisions on that mantra going forward.

What a Fool believes
For the most part, Shell's executive team would prefer that you look at the long-term outlook for the company rather than what's going on in the market on a day-to-day basis.

After all, some of the projects it's bringing online will be part of the production portfolio for 20-40 years. This is a major reason that it sees LNG as a major component of its long-term portfolio, and even though some of its projects might not meet intended targets at today's oil prices, it's almost impossible to project today's prices out over the company's investment time horizon.

In the meantime, it is going to cut costs, and ensure that it has the cash flow to continue its investments in the future while still providing shareholders with decent returns through its dividend program.