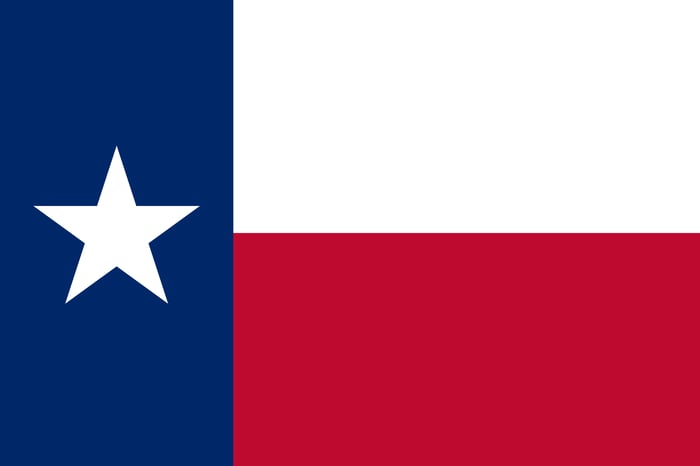 Texas is well-known for its booming oil and gas industry, but it may surprise you to learn that only one of the companies in the industry is among Texas' largest employers. In fact, there are only two private-sector companies of any kind that managed to crack the top five.

Here are the five largest employers in Texas and a little about each of them according to data from Career One Stop, a career exploration site sponsored by the U.S. Department of Labor (note: Employment numbers are rounded to the nearest 1000).

5. University of Texas at Austin (21,000 employees)
Recognized as one of the top public universities in the U.S., the University of Texas at Austin, or simply UT Austin, has been referred to as one of the "public ivies" due to its outstanding academic reputation. It has the fifth-largest single campus enrollment in the U.S., with more than 50,000 undergraduate and graduate students. The school is one of the biggest research universities, with more than half a billion dollars in annual research spending.

4. Dell (21,000)
Many people assume that as one of the leading computer makers and the world's top manufacturer of computer monitors, Dell would be based in Silicon Valley, but in fact, the company is headquartered in Round Rock, Texas. And, the company's main campus is home to about 21,000 of the company's more than 103,000 employees, making it the third-largest employer in the state.

3. University of Texas - MD Anderson (35,000)
Also known simply as MD Anderson Cancer Center, Texas' third-largest employer consists of both a cancer treatment/research center and a degree-granting institution. The facility is one of the most respected cancer treatment centers in the world and was ranked No. 1 for cancer care for 2015 in U.S. News and World Report.

2. Shell Deepwater Development (44,000)
Surprisingly, Shell's Deepwater operations, which are based in Houston, was the only oil company to make our list. Being able to safely unlock petroleum resources buried miles beneath the surface of the oceans requires a great deal of innovation and research, and Shell has certainly put a lot of Texans to work on this challenge.

1. Texas A&M (50,000)
It should be no surprise that Texas A&M has the top spot. After all, not only is it the largest university in Texas, but with more than 62,000 students on its massive 5,200 acre campus, it is the fourth largest in the United States. The university has an impressive research presence, with ongoing projects funded by NASA, the National Institutes of Health, National Science Foundation, and the Office of Naval Research.

It's worth noting that there are some companies based in Texas with more total employees than those on this list. For example, ExxonMobil is headquartered in Irving, Texas, and has more than 75,000 employees worldwide, but only a fraction of those actually live and work at that location.

With a thriving oil & gas industry (even with the depressed oil prices), a large technology industry, and many public sector jobs, it's no surprise that Texas has a better-than-average 4.2% unemployment rate and is a popular destination for job seekers.