Biotech stocks far and wide are getting pounded this month. The iShares Nasdaq Biotechnology ETF (NASDAQ: IBB), for instance, has dropped by more than 11% in August already, and this downturn has been accelerating in recent trading sessions: 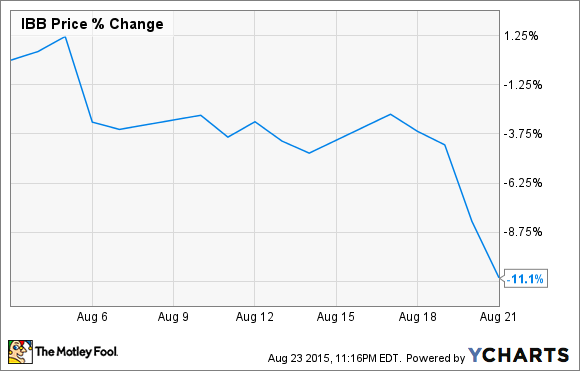 The odd part is that the second-quarter earnings reports across the industry were generally positive, with the clear exception of the negative impacts of a strong dollar on international sales. Moreover, bigger companies haven't exactly relented in their desire to partner with smaller firms, even coughing up huge sums of money to do so. So this industrywide pullback is probably best viewed as the result of the ongoing macroeconomic turbulence, combined with the industry's multi-year bull run.

Aratana is an under-appreciated pet healthcare company
For a number of reasons, Aratana looks to me like a great pickup during these turbulent times. First off, the company is rapidly transitioning from an experimental-stage entity into a potentially robust commercial operation. This summer, Aratana reported successful late-stage trial results for both its appetite stimulant, capromorelin (AT-002), and its extended-release bupivacaine liposome injectable suspension, AT-003, licensed from Pacira Pharmaceuticals and indicated for post-surgical pain in dogs. As a result, this tiny pet healthcare company is on track to bring a whopping six new products to market next year: 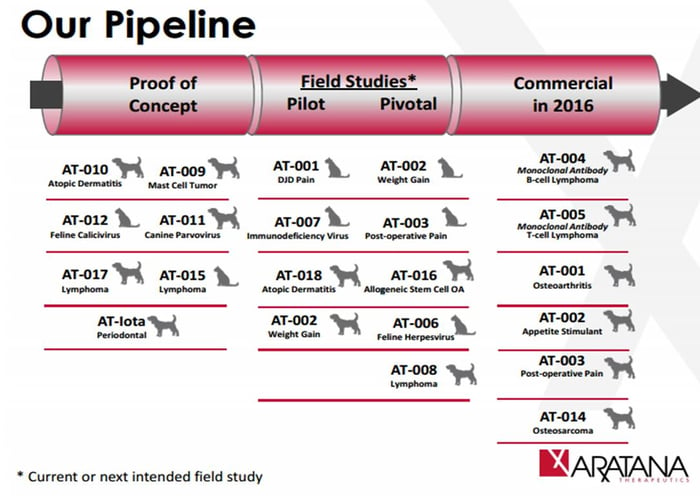 Such a diverse array of marketed products gives the company multiple shots on goal toward creating significant shareholder value going forward. But another key reason to like Aratana's stock right now is that the pet healthcare market has proved to be resistant against downward turns in the broader economy, meaning that its revenues should be sustainable for the long term.

Celldex Therapeutics has gotten crushed, but for all the wrong reasons
Despite reporting some impressive midstage data at the 2015 American Society of Clinical Oncology early in the year for its experimental brain cancer vaccine, Rintega, Celldex finds its shares now down by approximately 26% year to date, with most of the downward movement coming in the past two weeks: 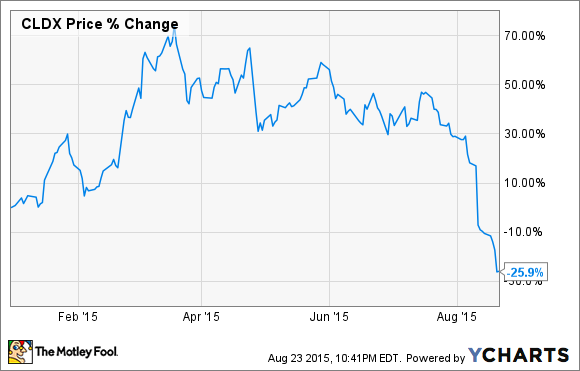 The problem is that investors were hoping the company could turn these midstage results into an accelerated approval. But the FDA apparently has other ideas. In the company's second-quarter earnings call, we learned that the FDA would like Celldex to finish the vaccine's late-stage study, dubbed "ACT IV," before conducting a formal review.

The good news is that Rintega, in combination with Roche's Avastin, has led to unprecedented increases in overall survival for a disease with an extremely poor prognosis. While there's no guarantee that Rintega's ongoing late-stage study will be successful, I'm cautiously optimistic that Celldex does indeed have a winner on its hands with this experimental brain cancer vaccine, making the stock an intriguing, albeit risky, buy following this most recent collapse.

Five Prime Therapeutics could be setting up for a huge turnaround
Five Prime is a clinical-stage protein therapeutics company that the market has crushed this year, in spite of announcing steady progress for both its business model -- through partnerships with Bristol-Myers Squibb and GlaxoSmithKline -- and its clinical program that sports three experimental products heading into clinical trials for 11 total indications. 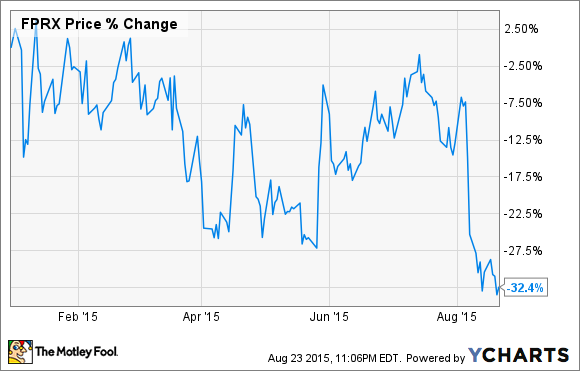 Aside from its emerging clinical platform that's on track to start reporting data from a handful of early-stage trials soon, the real reason this stock intrigues me is the company's best-in-class protein library that's being used to identify novel therapeutic targets and may ultimately serve as the catalyst in a buyout. For example, Roche, the king of cancer therapeutics and diagnositcs, has shown tremendous interest in gobbling up small-cap companies with similar assets in the past. I think it's only a matter of time before Five Prime is taken out.

Are any of these small-cap bios worth picking up right now?
As I said earlier, I like all three names at these levels. They are unquestionably "risky" stocks, given the state of their clinical programs, but they all have diversified platforms that keep them from being all-or-nothing types of biotechs (i.e., biotechs with a single high-profile clinical asset). They all also have the potential to become top dogs in their respective fields, giving them an asymmetric risk-to-reward profile over the long term. All told, I think the sell-off in these small-cap biotechs does represent a compelling buying opportunity for risk-tolerant investors willing to hold their shares for at least a few years.