Verizon (NYSE:VZ) has the best wireless network, according to the RootMetrics Mobile Network Performance survey for the first half of 2015.

The company dominated its rivals, with five out of six first-place finishes nationally, and 253 on a statewide basis compared to 95 for AT&T (NYSE:T), 25 for Sprint (NYSE:S), and 0 for T-Mobile (NASDAQ:TMUS). Verizon also won the overall performance battle, putting up a solid victory, as you can see on the chart below:

RootMetrics overall performance ratings for the first half of 2015. Source: RootMetrics.

It's a solid victory that, in past years, would have been cause for celebration, but the overall improvement of wireless networks makes being No. 1 less important than it has been in past years. This is not professional sports, where there can only be one champion. It's a competitive market where all four major players may have elevated their networks to the point where all are viable options for most consumers.

The times are changing
In a relatively short amount of time, all four major carriers have improved their networks considerably. Only 18 months ago, in the RootMetrics survey for the second half of 2013, Verizon's winning score was below where last-place T-Mobile ranks in the latest survey. 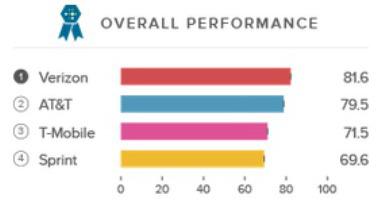 RootMetrics acknowledged that while Verizon was the winner yet again, all of the companies are becoming more competitive:

Verizon's margin of victory in five of the six categories, however, was relatively small. AT&T finished a strong second in the majority of categories, Sprint narrowed the gap in call performance, and T-Mobile made strides in our data and speed categories.

Digging into the results, you can see that while T-Mobile lags behind the others outside of big cities, the differences between AT&T and Verizon are minimal, with Sprint not that far behind. That's not to downplay what Verizon accomplished. The company excelled in state-level testing, winning or sharing the Overall RootScore Award in 47 of 50 states.

It's just that in many cases, it's like comparing the differences in performance between Olympic swimmers. Yes, Michael Phelps may beat Ryan Lochte more often than not, but the difference in their ability is very small and generally irrelevant. Both are are really fast, much like three of the four wireless players have top-tier networks -- with T-Mobile comparing in some areas, but dragging behind in others.

The bar continues to be raised
A wireless company can have great service in 99.5% of the country and always serve you well until you find yourself unable to make a call or access GSP in the under-served 0.5%. RootMetrics detailed exactly how important it believes network coverage has become in the opening section of the report, saying, "good coverage isn't a luxury; it's a necessity."

Our growing reliance on our smartphones means that network performance has a direct impact on your daily life. What you can do with your phone and how fast you can do it are largely dependent upon your carrier's network performance. When your carrier's network struggles, it's more than an inconvenience; it's a disruption to your mobile life. Bad service means losing productivity, convenience, and even connection with others.

Being first is a feather in Verizon's cap, but winning does not matter nearly as much as simply continuing to improve. It used to be very clear the people who travelled a lot or relied on their phones needed to pick Verizon.

That's no longer the case, because its competitors, specifically Sprint and AT&T, have improved. However, Verizon has gotten better as well, and it must continue to push forward as the standard for a good network moves ever higher.