Although uncertainty may be the only market certainty, investors embracing long term investing have made money by buying big market drops time and time again. Given the market's nose-dive this month, that could suggest there are stocks worth buying in long term portfolios on sale, including these three big cap biotech leaders.

No. 1: Gilead Sciences (NASDAQ:GILD)Gilead Sciences is the market share leading maker of HIV medicine, and in the past year it's also become the top maker of hepatitis C drugs.

The company markets a slate of HIV therapies that combine to produce more than $10 billion in annualized sales, including five separate HIV medicines that will each bring in more than $1 billion in sales a piece this year.

Gilead Sciences also markets Sovaldi and Harvoni, two ground-breaking drugs that are revolutionizing hepatitis C treatment. Because Sovaldi and Harvoni deliver 90% plus cure rates, reduce treatment duration, and in most cases eliminate the need for side-effect laden co-administration of peg interferon, they've become instant blockbusters. In the second quarter, sales of these two drugs were tracking at an annualized rate of nearly $20 billion.

The ongoing success of its HIV drugs and newfound success of its HCV therapies gives Gilead Sciences a bullet-proof balance sheet chock-full of cash, and as a result the company is investing billions in next generation medicine that could drive sales higher in the future. Among those medicines are new treatments for HIV, hepatitis C, hepatitis B, and cancer.

Additionally, Gilead Sciences financial firepower is funding shareholder friendly buybacks and a recently enacted dividend, both of which help support my argument that Gilead Sciences is a biotech gold standard worthy of portfolios. Still need convincing? Gilead Sciences shares have retreated more than 17% from their June highs, even as analysts have ramped up 2016 EPS estimates to $11.62 from $11.13. Because of falling shares and expanding forecasts, Gilead Sciences is trading at a forward P/E of less than nine -- levels that are their lowest in about five years. 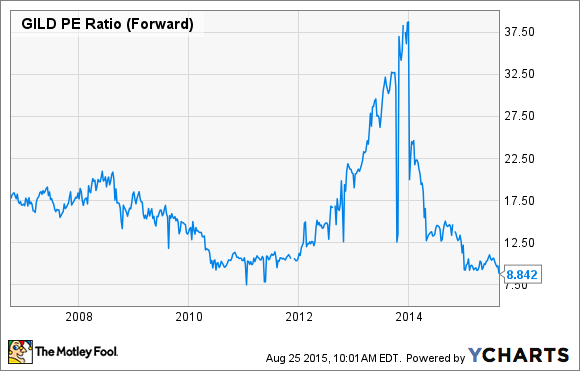 Exiting the second quarter, Revlimid is on track to deliver sales north of $5.6 billion and Pomalyst, which was launched in 2013, has a shot at eclipsing the $1 billion blockbuster barrier this year.

Celgene is also notching solid sales growth from its cancer drug Abraxane and rapid growth from Otezla, which won approval for use in psoriasis last fall.

Overall, Celgene believes its drugs will allow it to deliver sales north of $9 billion this year and $13 billion in 2017. Even more impressive, however, is its long term forecast for 2020. After including potential sales tied to its recent acquisition of the promising oral MS drug ozanimod, Celgene thinks its total sales could eclipse $21 billion by 2020.

A forecast like that goes a long way to justify paying-up to own Celgene's shares, but investors don't have to pay nearly as much today as they were paying in July. Celgene's shares have tumbled 18% since then and that means investors are paying less than 20 times next year's EPS to buy them.

That breath-taking move higher has given Regeneron an eye-popping trailing 12-month P/E ratio of over 100, but sales projections for its newly approved cholesterol busting drug Praluent may end up justifying investors' optimism.

In July, the FDA gave Regeneron and co-developer Sanofi permission to begin marketing Praluent to a patient population that could be as large as 10 million people. With a $14,600 per year price tag, even a small fraction of patients being prescribed Praluent would turn it into a multi-billion dollar blockbuster.

Add to Praluent's potential the ongoing sales growth for Eylea, which is used to treat age related macular degeneration and diabetic macular edema, two growing patient populations, and you've got a recipe for significant sales and profit growth in the coming years.

Despite industry watchers upping their 2016 EPS outlook for the company to $14.72 from $13.64 over that past 30 days, Regeneron's shares have slipped by nearly 9% this month, giving Regeneron a much more palatable forward P/E ratio of 34.

Tying it together
Of course, there's no telling when shares in Gilead Sciences, Celgene, or Regeneron, or any other company, will stop falling, but high quality companies that are leaders in their respective markets don't go on sale often and when they do, investors ought to consider adding them to portfolios.