Brian Feroldi
(TMFTypeoh)
Author Bio
Brian Feroldi has been covering the healthcare and technology industries for The Motley Fool since 2015. Brian's investing strategy is to buy high-quality companies and then let compounding work its magic. See all of his articles here. Follow @brianferoldi
Follow @brianferoldi
Small-cap biotech stocks can provide fertile hunting ground for investors who are looking to find the next big biotech winner. These companies are certainly capable of providing gutsy early investors with massive returns in a short amount of time. If you can buy into the next Gilead Sciences or Celgene before it makes its run, you could retire early from a modest initial investment.

Of course, finding the next winner ahead of its huge run is extremely challenging, and quite risky, as small-cap biotechs can flame out at any time if a clinical trial doesn't go as planned.

One company that recently caught my eye is Geron (NASDAQ:GERN), a small-cap biotech with a focus on cancer. Could it turn into the next biotech multi-bagger? Lets dig in.

An ugly public history
Since first coming public in 1996, Geron has proven to be a horrific performer for investors who bought in at the IPO. After seeing its price go parabolic during the dot-com craze, shares are down a sickening 55% from its IPO price. To make matters worse, the company has been very active in using the markets to raise capital to keep its doors open, causing early investors to endure an enormous amount of dilution. 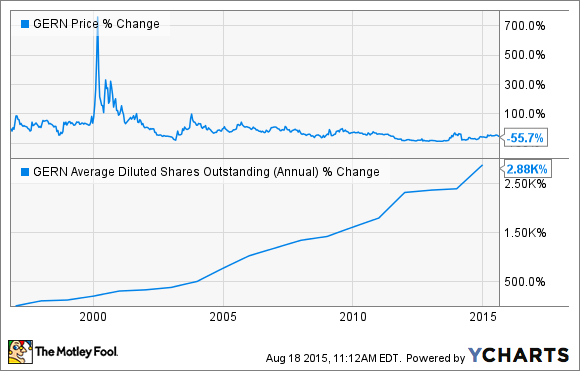 Tell me about telomeres
During its two decades on the market, the company has been focusing its development efforts on creating treatment options for a variety of cancers, using what finally appears to be a very promising technology.

In a healthy human body, cells are regularly making copies of themselves. However, they are only supposed to do so a limited number of times, and that cell division is controlled by the length of the telomere, which is a naturally occurring enzyme on the end of chromosomes. Each time the cell replicates itself, its telomere shrinks, and once it reaches a certain size, it signals the cell to stop dividing.


However, in some cells, the telomeres stop working properly, and the "off" switch is never properly signaled for the cell to stop dividing itself. While the company's research has shown that problems with the telomeres themselves do not appear to cause a healthy cell to turn cancerous, as many as 90% of all cancerous tumors have telomeres expression problems that enable unlimited replication.

Geron is working to fix this problem by developing a telomerase inhibitor, which it calls imetelstat. The company is currently in phase 2 clinical trials to study this therapy as a treatment for a variety of different cancers, including myelofibrosis, essential thrombocythermia, and multiple myeloma.

As promising of an idea as this sounds, the company has certainly hit its fare share of roadblocks along the way. In March of last year, things started to look downright horrific as the company reported that the FDA had placed a hold on the phase 2 clinical trials for imetelstat. Many investors sprinted for the exits, and shares nosedived during the month.

Thankfully, the company managed to survived the potential death blow after the FDA removed the clinical trial hold later in the year. As the trials resumed, the reported clinical results for imetelstat as a treatment of myelofibrosis look quite promising. A pilot study for the treatment showed an overall response rate of 36.4%, which included a complete remission for 12% of the patients in the study.

These results look especially good when compared to the current myelofibrosis treatment Jakafi, marketed by Incyte and Novartis, which has never demonstrated a complete remission in myelofibrosis patients.

A game-changing agreement?
The clinical news was shown to be attractive enough to get Janssen, the biotech arm of pharma giant Johnson & Johnson, to sign a collaboration agreement with Geron. The deal gave Geron a $35 million cash infusion and the potential to earn up to $900 million in additional milestone payments, plus a royalty on any worldwide sales.

Earlier this year, the FDA granted imetelstat the much-coveted orphan-drug status for the treatment of myelofibrosis. Additionally, in July 2015, enrollment began in a phase 2 clinical trial intended to evaluate imetelstat use in patients with high-risk myelofibrosis for whom a previous treatment did not work.

Will Geron be the next winner?
If Geron can successfully bring imetelstat to market, it certainly appears to hold huge market potential, as J&J estimates the therapy could provide more than $1 billion in peak sales as a treatment for myelofibrosis alone. If that was to occur, then Geron could reach multi-bagger status from here.

There is certainly a whole lot that could go wrong between now and then, but investors should be somewhat comforted in knowing that a big company like J&J is enough of a believer in this technology to lock up worldwide commercial rights. Plus, the company has only burned about $18 million dollars so far this year, so with $157 million in cash and investments on its balance as of the most recent quarter-end, the company appears to be on solid financial footing.

While this may be a critical turning point in Geron's market history, I'm not yet willing to call the shares a buy, as there is still far too much risk for my liking. However, if the company keeps reporting solid clinical data on imetelstat, I may be willing to open up a small starter position in the company in the near future.