Please ensure Javascript is enabled for purposes of website accessibility
Log In Help Join The Motley Fool
Free Article Join Over 1 Million Premium Members And Get More In-Depth Stock Guidance and Research
By Brian Feroldi - Aug 27, 2015 at 9:03AM

What does this long-time disappointment offer investors who want to get in today?

Good investors know that making money in the markets requires a long-term time horizon and a significant amount of patience, as even the best businesses require time before they can translate their products and services into lasting shareholder value. While this is a near-universal truth for even big companies that are currently producing gobs of cash flow, it is especially true for small-cap, money-burning biotechs that tend to be long on promises but short on capital.

Investors who bravely wade into the biotech waters often have to endure years (or even decades) of what seems like endless waiting before they find out if a given company's technology will ever bear fruit. And yet, while the majority of the fruit that these companies create is destined to become rotten, if you can add the right small-cap biotech to your portfolio the results can simply be amazing.

Consider Inovio Pharmaceuticals (INO 2.93%), a company that has been a perennial disappointment for investors. Its stock's long-term downward price movement and the huge growth in its share count make the company look about about as ugly as they come, and it actually holds a eerie resemblance to another small-cap biotech that's been a huge loser for investors. But is the future finally starting to look bright for long-suffering investors in this company? 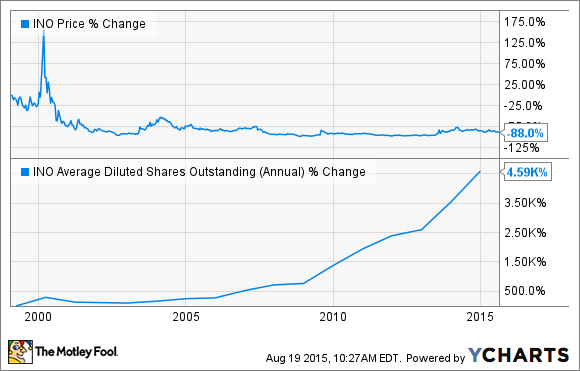 Electrifyingly cool technology
Inovio's secret sauce is using its technology to create DNA-based vaccines that are then embedded into the body's cells. By changing the DNA at the cellular level, the cells can be programed to produce the antigens needed to fight a patient's disease. Getting the DNA into the cells has proven to be a very difficult task, but the company has developed an interesting technique of using a a small electric pulse that opens up the cell walls and allows the modified DNA to get in. 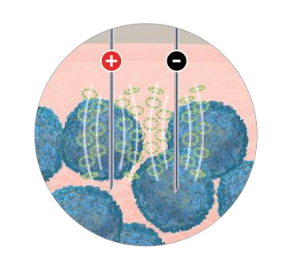 Two big believers
Of course, having a cool-sounding technology is one thing, but turning it to an available product is another, and thus far the company hasn't been able to bring a single product to market. But that doesn't mean this technology is dead or that it doesn't have its believers. In fact, the company has long worked with research partner and pharma giant Roche, which is actively working on creating products using Inovio's technology that are designed to treat hepatitis B. Better yet for Inovio, Roche is footing the bills to fund clinical trials.

It also looks like the company has created yet another believer. Recently, it successfully brought MedImmune, the biologics arm of pharma giant AstraZeneca, into the fold. MedImmune acquired the rights to INO-3112, which is in early clinical studies as a treatment against cancers of the cervix, head, and neck. The partnership announcement sent the stock soaring, and has the potential to be a financial bonanza for Inovio. The deal provided Inovio with a $27.5 million cash infusion, makes MedImmune responsible for paying all for all clinical development costs, has the potential to trigger an additional $700 million in milestone payments, and if all goes well, it provides a double-digit royalty payment on any INO-3112 product sales.

Keeping its lead to itself
While the partnerships with Roche and MedImmune do provide the company with additional financial backing as well as credibility, its most promising drug candidate still remains wholly owned. Its lead product candidate is called VGX-3100, and the company is exploring its ability to fight cervical dysplasia caused by human papillomavirus, or HPV, which is the world's most common sexually transmitted disease. Reported phase 2 results for VGX-100 looked promising and were able to meet both the primary and secondary endpoints. Inovio is currently gearing up VGX-1000 for phase 3 clinical trials that are set to start in 2016.

HPV is a major cause of cervical dysplasia and cervical cancer cases, as the company estimates that there are 3.4 million lives affected by cervical precancers in the the U.S. and EU5 countries alone. Peak sales for the drug could hit $500 million or more, which currently represents a huge opportunity for Inovio.

Solid financial footing
Small-cap biotech investors know that they need to keep an eye trained on the company's cash position at all times, as even if things go as planned, it will still be years before the company would receive its first dollar of revenue from any drug that hits the market. Thankfully, it does seem to appear to have plenty of liquidity on hand -- after completing a $87 million secondary offering in May, the company now boasts $154 million in cash, which should be enough to keep the doors open all the way until the fourth quarter of 2018.

Is Inovio a buy?
Inovio's technology certainly looks very interesting, and if it can successfully bring its first drug to market, then the days of tapping the markets for additional capital might finally be over. Still, while small-cap biotechs certainly require a tremendous amount of patience, given the company's history of disappointing shareholders and diluting value, I'm more than happy to watch this exciting name from the sidelines. If the company can demonstrate clinical superiority for VGX-3100 in its phase 3 clinical trials, I'd be more than happy to change my tune. But until that happens, Inovio is simply far too risky for my taste.