Many investors love dividends, but all of them hate stocks that unexpectedly cut dividends. In the cases of Avon Products (NYSE:AVP)and Tupperware Brands Corporation (NYSE:TUP), I think there is cause for worry. I have quantitative and qualitative concerns about both companies and their ability to continue to pay the kinds of dividends that investors have gotten used to in the last few years. With that said, let's take a closer look.

High yield, falling earnings
AVP stock currently has a 5.2% dividend yield, according to S&P Capital IQ, while TUP has a 5.6% dividend yield. As you can see in the table below, both are expected to see dramatically falling revenues and earnings in 2015 and then generate lackluster sales in 2016. However, earnings are expected to improve. If earnings turn out as expected in 2016, each should be OK with regard to their dividends. However, I would argue that on a risk/reward basis, they are not stocks worth buying for the dividend alone.

Source: Yahoo! Finance, full-year estimates are approximate as each company has different year-ends.

Free cash flow to dividend
As we have seen above, both are set for a fall in earnings this year, and usually when earnings decline, so does free cash flow. I'm focusing on free cash flow because it's what dividends are paid from. If a company cannot generate sufficient cash flow in order to pay its dividend, it's unlikely to be able to keep paying the same dividend indefinitely without having to borrow money.

The following table shows the ratio of dividend per share, or DPS, to free cash flow per share. The higher the ratio, the harder it will be for a company to grow or maintain its dividend. The data show the last five years and the trailing four quarters. As the chart shows, both companies have seen the ratio rise to above 60% at a time when earnings and cash flow are falling. 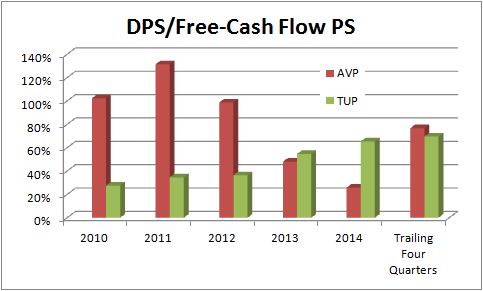 The problem appears to be particularly acute at Avon Products. CFO Janes Scully recently reiterated its 2015 free cash flow guidance of $100 million -- a figure below total dividends paid in the last four quarters. In addition, note that the ratio (in the chart) improved for Avon Products in 2013 only because its annual dividend was cut from $0.75 to $0.24.

The situation is rather better at Tupperware, with its management forecasting $180 million to $190 million in free cash flow compared to its trailing dividends paid of $136.3 million. However, if its earnings continue to deteriorate, then the dividend could be challenged in the future.

Quality of earnings?
Of course, if you believe in the analyst estimates detailed in the first table, there shouldn't be an issue with future dividends -- the companies will simply generate more earnings and cash flow in future. However, both businesses face significant challenges.

Avon Products and Tupperware are businesses that use sales representatives to distribute products to end-user consumers. While both companies are well-known in the developed world, it's the growth opportunities in the emerging world that really matter for their future prospects. Indeed, emerging markets accounted for 67% of Tupperware's revenue in its second quarter Meanwhile, Latin America contributed more than 53% of adjusted operating profits from operations in the first six months of Avon Products' year.

Unfortunately, economic trends are not favoring businesses that rely on emerging markets for growth right now, and it's showing up in both companies' results. Tupperware's management expects to "grow its sales annually in local currency in the longer term by 6 to 8%, comprised of about 10% growth by its emerging market units and low single digit growth by its established market units." However, a quick look at its recent second-quarter results reveals that constant-currency sales only grew by 8% in emerging markets. Moreover, the active sales force -- the key to its long-term growth -- within emerging markets increased by a paltry 1% in the quarter.

It was a similar story with Avon Products, where total active representatives declined 2% in the second quarter compared to the same period last year. In fact, Latin America active representatives actually declined 3% in the quarter. Meanwhile, sales in Brazil -- a key emerging market for Avon -- were down 6% in constant dollars, with China also declining.

The takeaway
In a nutshell, both businesses are facing tough conditions in the end markets where they are expecting growth. In particular, if economic growth in Brazil and China continues to slow, it's hard to see conditions improving for Avon and Tupperware in the near future. In addition, both companies are finding it difficult to grow the numbers of active representatives in emerging markets -- not a good sign for future growth.

There may well be value in both these businesses, but, in my opinion, these two stocks should not be bought for their dividends alone.