What if you've been investing the wrong way for years? It's likely you are. But it's not your fault.

Investors listening in on their first company quarterly conference call immediately get a clear sense of how Wall Street is focused on factors with little relevance to making a buy or sell decision. You hear arcane statements from analysts like "We are modeling gross margins at X%" and questions asked of executives such as "What comprised the $Y billion of impairment charges you accrued in the quarter?"

This sort of relentless focus on near-term metrics is pervasive in all areas of finance. No wonder regular investors underperform the market, too.

These sorts of questions carry little weight when investing for the long haul. Ask yourself this: "Should I care about what the company's earnings -- or whatever financial metric -- are over the next few quarters if I'm holding the stock for the next five to ten-plus years?"

Here's a better question to ask those execs: What is the company culture like?

An executive who can deftly answer that question and successfully align the company's culture with its overall mission could reward patient investors handsomely.

The case for investing in culture
In it's purest form, a good culture is a combination of values and behaviors that contributes to the company's mission for the greater good. The greater good is what ties it all together and must be present. Enron, for example, had a very strong culture, but no one argues that the company left a lasting, positive impression on the world.

Now, a wealth of studies exist on how company culture affects stock returns. Let's look at just a few.

1. The Harvard Business School completed a landmark study in 1992 highlighting the benefits of a performance-driven culture. Notably, stock growth skyrocketed 901% for companies with a strong culture, compared with 74% for those without the same. I've included additional results in the following chart. 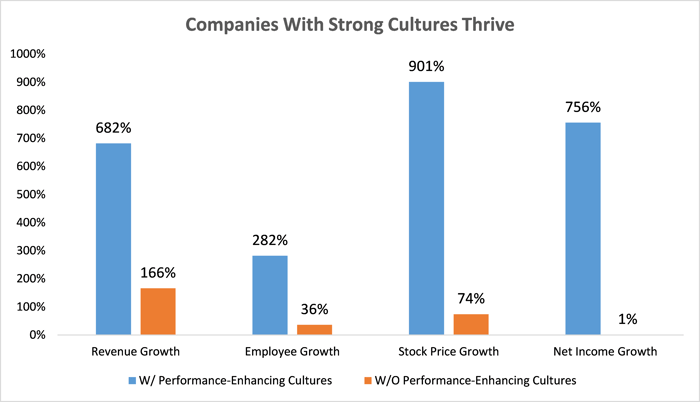 The list of studies goes on and on, and it quickly becomes clear that company culture should be on the minds of investors when hitting the buy button.

What gives?
With the pile of evidence stacking up, why then do companies dismiss the importance of culture aligned with a company's mission, and why don't investors pay closer attention?

I blame inertia and the intangible nature of measuring culture.

It takes a deliberate and conscious effort to break bad habits. From the way educators traditionally teach finance to what Wall Street and the financial media focus on, near-term quantifiable metrics get the spotlight while more important but less quantifiable ones -- factors such as culture that can actually boost your portfolio's value in the long term -- take a supporting role. Playing in that sandbox may work may work for traders, but those metrics just aren't that relevant when holding stocks for the next decade.

Companies that fit the bill
For those wondering which specific companies put culture ahead of financial performance, here are some on my short list and why: