Qualcomm (NASDAQ:QCOM), the largest mobile chip maker in the world, has had a tough year. Samsung, one of its top customers, dropped its Snapdragon chips and wireless modems from its flagship Galaxy S6 handsets in favor of in-house components. It also faces rising competition from cheaper rivals like MediaTek and RockChip, which power many low-end devices in emerging markets.

Those challenges led Qualcomm to reduce the high end of its fiscal 2015 revenue forecast by $1.5 billion last quarter Therefore, it isn't surprising that Qualcomm stock has slid over 20% since the beginning of the year. But after that decline, the stock looks like a solid long-term investment for three reasons.

1. Patents, not chips
Qualcomm's QTL (Qualcomm Technology Licensing) business, which licenses CDMA technologies to handset makers worldwide, entitles the company to a 3% to 5% cut of the wholesale price of every smartphone shipped worldwide.

That divergence has fueled constant speculation that the two units could be split into stand-alone companies. But as I discussed in a previous article, Qualcomm is using the QTL business to support the QCT one, so separating them might help the former but crush the latter. Looking ahead, Qualcomm's business model remains unbalanced, but bottom line growth at the QTL unit could help offset losses at its QCT unit.

2. Dividends and valuation
Qualcomm's bottom line took a big hit last year due to a $975 million antitrust fine in China. But excluding that speed bump, its net income and free cash flow growth have remained fairly solid over the past 10 years. 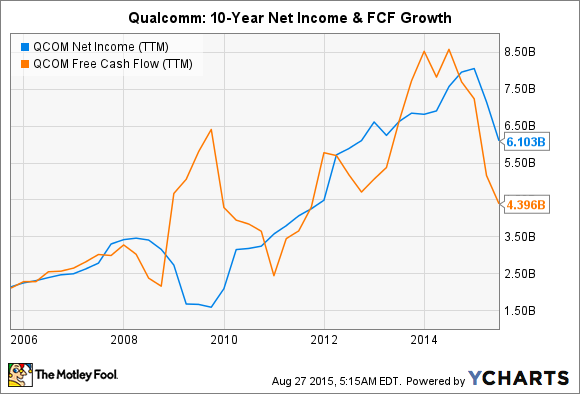 Over the past 12 months, Qualcomm paid out 65% of its free cash flow as dividends, compared to Intel's (NASDAQ:INTC) FCF payout ratio of 41%. This means that both chipmakers have room to keep raising their dividends. Qualcomm has raised its dividend annually for 12 consecutive years, with an average increase of 22% per year over the past four years. Intel's dividend meanwhile was frozen at $0.22 per share from 2012 to the end of 2014, after which it was increased by just 4.5%. Qualcomm currently pays a forward annual dividend yield of 3.5%, while Intel yields 3.7%. Both yields are significantly higher than the average S&P 500 yield of 2.15%.

Qualcomm is also a fundamentally cheap stock. The stock trades at 15.5 times trailing earnings, compared to an average P/E of 19 for the communication equipment industry.

3. Opportunities for growth
Qualcomm plans to diversify away from the premium smartphone market by expanding into the Internet of Things (IoT) market. IDC expects that market, which consists of everyday objects connected to each other, to grow from $1.9 trillion in 2013 to $7.1 trillion by 2020.

Since Qualcomm makes the majority of mobile application processors and wireless modems worldwide, it plans to leverage that strength to launch new IoT chips. That's why it established the AllSeen Alliance, an IoT project which uses the open-source AllJoyn framework to enable smart homes, cars, wearables, and mobile devices to connect to each other.

To complement that push, it launched the Qualcomm Robotics Accelerator, which provides resources to start-ups specializing in robotics and IoT. Qualcomm also recently acquired CSR, an electronics company that specializes in Bluetooth, wireless, and automotive infotainment services, for $2.5 billion. Qualcomm hasn't disclosed how much revenue it generates from IoT chips, but rising demand for connected devices could help Qualcomm reduce its overall dependence on smartphone and tablet chips.

The key takeaways
Qualcomm has taken a lot of punches lately, and there are still questions to be answered. The company's settlement in China reduces the licensing revenue it can generate per handset, and there are concerns that Intel's aggressive expansion into mobile chips could hurt Qualcomm's growth. There are also persistent rumors that Intel could replace Qualcomm's wireless modem in select iPhones soon.

However, many investors overlook Qualcomm's dividend, its cheap valuation, the stability of its QTL business, and its long-term growth potential in the IoT market. Therefore, I'm thinking about buying a few shares of Qualcomm, since the positives seem to outweigh (or at least balance out) the negatives for now.