These two toy giants' profits, and their dividends, are going in vastly different directions.

In the toy industry, two companies, Mattel (MAT 3.17%) and Hasbro (HAS 1.27%), reign supreme. However, the toy war appears to be going Hasbro's way right now. Hasbro has enjoyed strong growth over the past few years, thanks to its popular toys, including its Star Wars and Jurassic Park products. Meanwhile, Mattel seems to be going in the opposite direction, due to continued declines in its flagship Barbie brand. 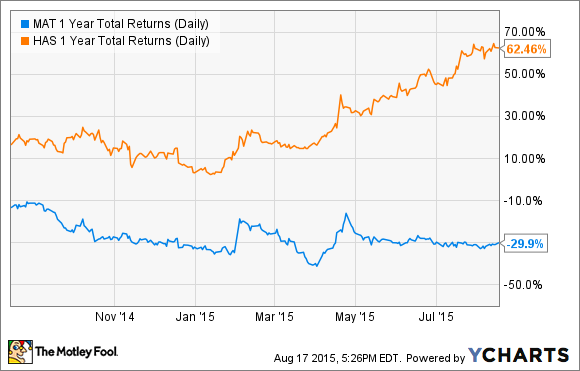 This means Hasbro's dividend growth is outperforming Mattel's, right alongside their respective fundamentals.

Hasbro does an excellent job of generating free cash flow, which is very important to growing dividends. Over the first half of 2015, Hasbro produced $168 million of free cash flow. Its dividend cost the company $110 million in this period, which equates to a comfortable 65% free cash flow dividend payout ratio.

For its part, Mattel reported a $69 million loss over the first six months, which explains its slowing dividend growth. The challenge for Mattel is to restore the Barbie brand, which has seen sales crumble this year. Worldwide Barbie sales fell 11% just last quarter. In an effort to turn itself around, Mattel is spending a lot of money on advertising and other restructuring expenses. This has caused the company to bleed cash. Over the first six months, Mattel generated negative free cash flow to the tune of $354 million. 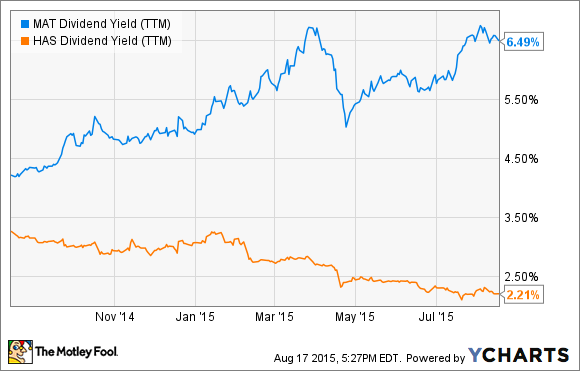 Mattel wins on dividend yield, but tread carefully
Mattel's 6.5% yield is much higher than Hasbro's 2.2%. Of course, the trade-off is that Mattel's higher dividend yield carries a much higher risk of getting slashed. Mattel is in the process of a turnaround, but the results have not shown up yet. The company is burning through cash, and Mattel's current dividend cost the company $257 million over the first two quarters of the year. Mattel needs as much cash as it can get its hands on, and a dividend cut is one of the easiest ways to raise cash.

As a result, income investors looking for a reliable, steadily growing dividend should pick Hasbro, while only risk-averse investors should consider Mattel at this point.