Please ensure Javascript is enabled for purposes of website accessibility
Log In Help Join The Motley Fool
Free Article Join Over 1 Million Premium Members And Get More In-Depth Stock Guidance and Research
By Todd Campbell - Sep 2, 2015 at 10:49AM

Long term investors need to look at markets through a different lens than short term traders and that means viewing corrections as an opportunity to buy good companies at better prices.

Although no one has a crystal ball telling them where shares in companies will trade, I'm betting my money that buying these three companies during the current sell-off will be profit-friendly to my portfolio over the long haul.

No. 1: Twitter, (TWTR 1.65%)
Twitter's management has been on the hot seat for an inability to maximize revenue from mobile users, but with hundreds of millions of people on their platform, an improving economy, and a pending Presidential election next year, I think better times are coming.

Granted, Twitter isn't a "cheap" stock by typical valuation methods, but disruptive technology companies rarely trade based on P/E ratios. Instead, they move based on expected growth and despite worries that Twitter's monetization efforts are trailing competing platforms, Twitter's sales still grew 61% year-over-year in Q2 and that's nothing to sneeze at. Overall, it wouldn't shock me if dissecting the latest Trump-ism or Hillary-gate will result in plenty of Twitter-worthy fodder in 2016 and if I'm correct, then tailwinds should support efforts by Twitter's new management to juice revenue growth, in turn leading to higher share prices that could make buying the company's shares savvy.

No. 2: Mylan N.V. (MYL)
Worries Mylan has taken its eye off the ball to pursue a hostile acquisition of over-the-counter drugmaker Perrigo (PRGO 0.42%) should fade once Perrigo either acquiesces or Mylan abandons its efforts.

In either case, a return of Mylan's focus back to the business of growing demand for generic drugs could prove profit friendly given Mylan's potential runway in generic alternatives to expensive biologic drugs, or biosimilars.

Mylan, alongside its partner Bicon, is at the forefront of developing biosimilars targeting billions of dollars in market share controlled by top selling drugs like Humira, the world's best selling therapy with more than $12 billion in sales last year.

Because roughly $100 billion in biologics sales will come up for grabs in the next five to 10 years, estimates are calling for the biosimilars market to expand from $3 billion this year to $20 billion in 2020.

Such an expansion would be good news for Mylan because biosimilars complexity lends itself to higher prices for generic alternatives to them, in turn making them more profitable to Mylan than traditional generic small molecule drugs.

Even without the help of biosimilars, however, Mylan's generic business could continue to thrive. Over the past decade, the company's sales have grown significantly, including a 36% year-over-year leap to $2.37 billion in Q2, and given the pace of drug development and the patent expiration calendar, there should be plenty of opportunity for growth ahead. If I'm correct, then paying roughly 10 times forward EPS to buy shares in Mylan will be a bargain. 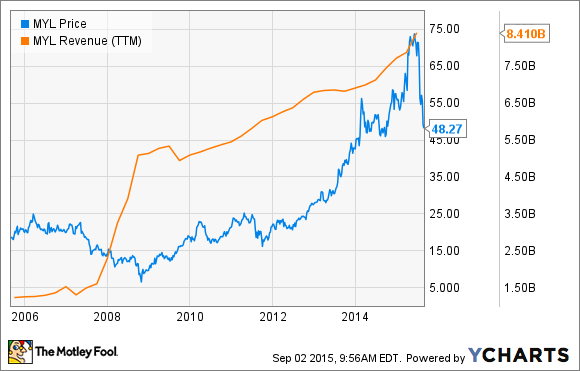 Microsoft is successfully growing its cloud based business and Office 365 is a big reason why. Last quarter, cloud revenue climbed 88% to an annualized sales $8 billion run rate and importantly, commercial seats subscribing to the online productivity suite were up 74% year-over-year and four out of five Fortune 500 businesses have now adopted the platform.

Office 365 is suring-up the business end of Microsoft's revenue stream with shareholder-friendly recurring revenue, but it's Windows 10 gaming features that could invigorate consumer device sales over the coming years.

Transitioning gaming off-the-console via Windows 10 marks an important first step toward shifting the battle for dominance from the living room to anytime/anywhere game play. If that transition resonates -- and I believe it will -- then Windows 10 could lure back consumers who have shifted to Apple devices in the past five years.

Admittedly, Microsoft's days as a high growth tech company are behind it, but these initiatives suggest that Microsoft's stodgy reputation may become a thing of the past too. If so, then paying less than 14 times forward EPS to buy shares offering a 2.8% dividend yield makes a lot of sense.

Tying it together
Of course, no one knows where shares in Twitter, Mylan, or Microsoft are heading, but each of these companies offers investors long-haul growth catalysts at a reasonable valuation. Since I'll be sticking around in these stocks for a while, I'm less interested in where they'll trade in the coming months than I am in where they'll be in the coming years and because of that, I think all three stocks are worthy of including in portfolios.