Amgen's new LDL-lowering cholesterol medication Repatha gets the go-ahead from the FDA. 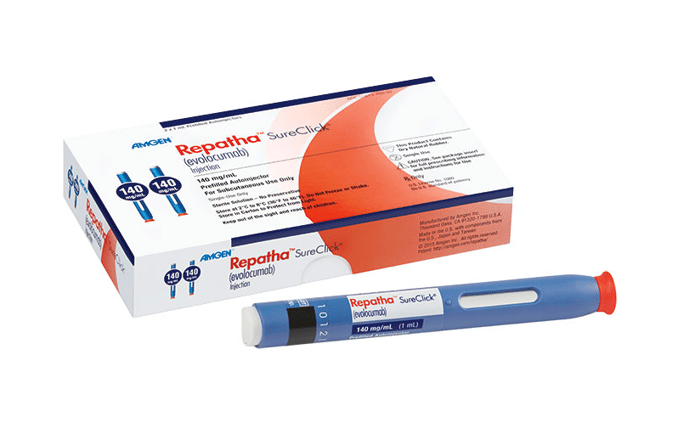 Biotech behemoth Amgen (AMGN 0.15%) recently shared some good news with investors as the company announced that the FDA has officially approved its new cholesterol-lowering medication Repatha for sale in the U.S. This welcome announcement comes roughly a month after the company reported that European regulators had approved the drug available for sale.

Repatha is a PCSK9 inhibitor, meaning it is part of a new class of cholesterol-controlling drugs that hold huge promise for million of patients around the world who struggle to control their cholesterol levels. PCSK9 inhibitors work by helping the liver remove more LDL-cholesterol, also known as the "bad" cholesterol, from the blood.

Reported clinical results demonstrate the power of these new medicines; in phase 3 trials, patients who used Repatha were able to reduce their LDL cholesterol by approximately 54%-77% when compared with using a placebo, which is an enormous improvement. Keeping LDL cholesterol levels in check is important to long-term health outcomes, as LDL cholesterol is very sticky and can contribute to plaque forming in the walls of the arteries, which greatly increases a patient's risk of having a heart attack or a stroke.

Repatha has been approved to work alongside other treatment options for patients who are struggling to control their cholesterol levels despite using diet, exercise, and the maximum allowed dosage of statins, which for decades have been the go-to medication for lowering LDL cholesterol levels.

Needle-moving potential
Despite only being approved to treat patients who have tried a variety of other methods and still struggle to control their cholesterol levels, the current addressable market for PCSK9 inhibitors already looks huge, as an estimated 11 million Americans currently fit the labeling description. The potential addressable market for these inhibitors grows to a ridiculously huge size when you consider that the the total number of Americans who have high levels of LDL cholesterol is currently estimated to be 73 million Americans. You can imagine how big the numbers get when you add the rest of the world to the mix.

Given these numbers, analysts are currently estimating peak sales of PCSK9 inhibitors in total to be around $12 billion annually, so if you imagine a 50% market share for Repatha, it appears the potential could be around $6 billion.

Like any analyst estimate, that number is certain to be wrong, but Repatha still appears to be staring down a multibillion-dollar market. A market of that size is exactly the kind of market opportunity Amgen investors should be looking for -- since the company racked up more than $20 billion in sales in 2014, it needs to find drugs with huge market potential if it hopes to move its profit lines at a brisk pace and help fund its capital return programs.

A pricing war ahead?
Of course, this approval puts Amgen on a collision course with Regeneron Pharmaceuticals (NASDAQ: REGN) and Sanofi whose own PCSK9 inhibitor Praluent received FDA approval about a month ago.

Since Amgen has the benefit of seeing how Regeneron was going to price Praulent before it decided to release its pricing information, the company was able to undercut Praulent by a small discount. The wholesale cost of using Praulent for a year is currently $14,600, while Amgen priced Repatha at "only" $14,100 per year.

While each of these numbers look quite large, it's important to remember that the listed price of a drug is usually very different than what insurers and patients end up paying, as it's a common practice in the industry to give pricing concessions in exchange for formulary access. How much consumers end up paying for these drugs is still an unknown at this point.

What is known is that you can bet the big pharmacy benefit managers are going to be negotiating hard with Amgen and Regeneron to lower the costs of these drugs as much as possible. Express Scripts pointed out that PCSK9 inhibitors are being priced at more than 50 times higher than generic statins, and it even went so far as to predict that these drugs could come to cost the country "more than $100 billion each year, if not managed properly." The company also claimed that "PCSK9 inhibitors are on a path to become the costliest therapy class this country has ever seen."

While I sincerely doubt PCSK9 inhibitors will ever come remotely close to the $100 billion annual cost mark, you can bet Express Scripts and the pharmacy benefit manager segment of CVS Health will be fighting tooth and nail to control spending on this new class of drugs.

Is Amgen a buy?
Only time will tell how big the market for PCSK9 inhibitors will ultimately be, but this approval announcement is certainly good news for Amgen investors. Better yet, the stock market's recent craziness has knocked Amgen's price down so much that the stock now trades at a trailing price-to-earnings ratio of around 20.

Given the market potential for Repatha and the company's capital return program, this biotech blue chip now sports a dividend yield near 2%, which is definitely making this investor think it might be time to add a few shares to his portfolio.