What do Procter & Gamble, Kohl's, and Whole Foods Market have in common? Easy: They are the best investment ideas in consumer goods this month. Here's why.

September is here. As summer folds into autumn, it's high time to take a fresh look at your stock holdings.

To help out with this seasonal routine, we asked a panel of three Motley Fool contributors for their best investment ideas in the consumer goods sector. In Kohl's (KSS 2.65%) and Whole Foods Market (WFM), they found two battered retailers poised for big comebacks. Procter & Gamble (PG -0.46%) stocks the store shelves rather than running the stores, but offers a similar deep-discount situation.

Tim Green (Kohl's): Shares of Kohl's, which operates over 1,000 department stores nationwide, have been decimated over the past few months. A couple of disappointing earnings reports, along with the recent market turmoil, have caused the stock to drop about 35% since the beginning of April.

The company has emerged from a period of slumping sales, returning to comparable-store sales growth during the last holiday season, and Kohl's has now managed to post positive comps for three quarters in a row. Profits are still being pressured; adjusting for a one-time debt extinguishment charge, EPS declined by 5% year-over-year in the second quarter. But that problem should fix itself if the company can continue to grow, as sales are still below peak levels.

Kohl's now trades at roughly 11.5 times the low end of the company's guidance for full-year earnings. The market is clearly not expecting much growth from Kohl's, and the company has mostly stopped building new stores for the time being. But a combination of growing comparable-store sales and share buybacks, funded from the company's free cash flow, can still drive earnings higher.

And while investors wait for Kohl's to fully right the ship, a dividend yielding around 3.5% is certainly nice to have.

All told, P&G investors have not only underperformed the market over the last two years, but actually lost money even if you're doing the math on dividend-adjusted share prices. That's about as rare as chicken lips.

Yes, P&G missed Wall Street's revenue targets in the recently reported fourth quarter. Yes, the company has missed earnings targets in two of the last four reporting periods. And yeah, the board of directors cut CEO A.G. Lafley's annual bonus by $1.1 million due to unimpressive results in the 2015 fiscal year.

But P&G's cash flows continue to grow at a healthy pace, gaining 7.5% year over year. Lafley's bonus reduction is nothing more than a slap on the wrist, as he still collected $18.3 million in total compensation. And he runs the company with a multiyear focus, not to please investors in the next quarter.

This is not Procter & Gamble's first tussle with slowing sales or new competition, yet the company has increased its annual dividend payouts without interruption since 1957. The result of ever-rising payouts on top of struggling share prices? Fantastic dividend yields, of course.

P&G offers a trailing yield of 3.7% today. It's one of the five richest yields among the Dow Jones Industrial Average members, and the stock hasn't offered yields on this level since 1988: 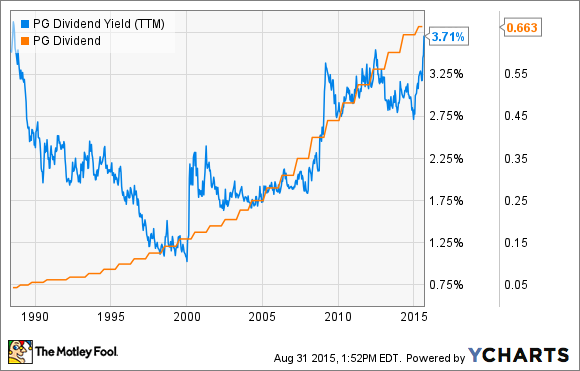 This is the kind of stock that will take a beating and come back swinging. Simply put, this is a fantastic time to pick up P&G shares at attractive prices.

Jeremy Bowman (Whole Foods Market): Like the two other stocks on this list, Whole Foods Market has stumbled upon tough times. Shares of the organic grocer are down 50% since their peak in the fall of 2013, and the once high-flying growth stock is now trading at a modest P/E of 19, in line with the S&P 500.

Though competition has pressured same-store sales and profit growth, there are a number of catalysts that should help the stock make back its losses. Comparable sales growth fell to just 1.3% in its most recent quarter, but at stores younger than five years they increased to 8.7% and the company still saw average weekly sales per store improve modestly to $728,000.

Those two figures indicate that demand for new Whole Foods stores continues to be high, and back up management's claims that there is room in the U.S. market for 1,200 of its stores, or about triple its count today. Additionally, the opening of its 365 brand stores next year -- aiming for convenience, "everyday low prices," and high quality, with a tilt toward attracting millennials -- could also spark long-term growth in sales and profits.

Other indicators point to Whole Foods' brand strength. Its sales per square foot of $990 are about twice that of competitors like Kroger and Wal-Mart and its return on invested capital of 15% is also better than much its industry. Whole Foods is stronger than recent reports would indicate, and it still stands to be the biggest winner from the nationwide shift to healthier eating. It may not recover this month, but I expect the stock to be significantly higher by 2016.