Profits are slipping, and tourists are spending less at the jeweler's flagship stores.

What: Luxury jeweler Tiffany (TIF) saw its stock fall by 14% during the month of August, according to S&P Capital IQ data. Shares are now down 24% year-to-date. The stock is sitting at a 20% loss over the past 52 weeks. 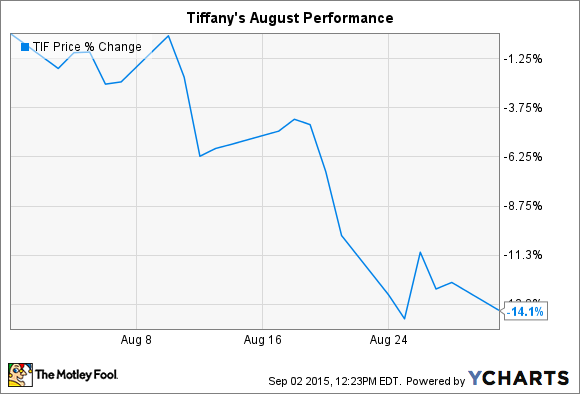 So what: Tiffany in late August posted second-quarter results that failed to impress Wall Street. Sales fell slightly, slipping to $991 million from the prior year's $993 million. Adjusted earnings also shrank, falling 10% to $0.86 per share. By contrast, analysts were looking for $1 billion of revenue and $0.91 per share of profits out of the company.

Foreign currency swings hurt Tiffany's second-quarter results, just like they have for most global retailers. Adjusting for foreign exchange yields sales that were up 7%, rather than the flat result it actually reported. However, a stronger U.S. dollar presents a special challenge for this jeweler: lower spending by foreign visitors to its flagship stores in New York City. In fact, comparable-store sales were flat in Tiffany's Americas region, which management blamed on "lower foreign tourist spending in the U.S." that offset healthy comps growth in Canada and Latin America.

But the retailer booked stronger growth in many of its international markets, notably China, Australia, and Japan. And profitability improved thanks to lower diamond prices. Gross margin  rose from 59.5% of sales last year to 59.9%. "While the adverse effects from the strong dollar have been even more significant than initially expected, we met our overall expectations in the first half of the year," CEO Frederic Cameral said in a press release.

Now what: Yet the difficult global sales environment led Cameral and his team to lower their full-year earnings forecast from the $4.20 per share they had projected last quarter to as low as $3.99 per share now. That represents a profit drop of as much as 5% from 2014's result.

Management is encouraged by demand for Tiffany's latest design launches, including Tiffany T jewelry and CT60 watch collections. It is hoping that a wide range of new products it is prepping for launch will boost sales and profits over time. "We remain focused on pursuing longer-term growth opportunities that strengthen Tiffany's position among the world's important luxury brands," Cameral said.