Here are three companies our analysts have their eyes on

Earnings season is in the books, and the stock market has dropped considerably since the second quarter ended. So, with most of the market more attractively priced, it's a good time to look for opportunities to get into long-term winners at cheap prices. We asked three of our analysts to shed some light on the stocks they are keeping an eye on during the third quarter, and here is what they had to say.

A price war also likely looms. Regeneron has a card up its sleeve if that happens, since it has a lower dose it could price at a substantial discount. Eventually, the market should be large enough for everyone to win, since the PCSK9 drugs have a significant impact on the long-term health of patients who don't respond to the cheap statins now on the market.

Regeneron goosed its research budget last quarter to $390 million -- a 32% increase. That's to help fund a sizable Phase III effort on a drug that could be as big as Praluent. Rolling toward FDA approval is dupilumab, an antibody that targets asthma and eczema.

Meanwhile, I'll also be scrutinizing sales of eye drug EYELEA, which jumped 58% last quarter. With Sanofi's recent $1.8 billion pact for immuno-oncology drugs in hand, Regeneron looks primed for huge continued success. But when things look this good in biotech land, you try not to blink, because everything can change in a moment.

Jason Hall: Bofi Holding, (AX -0.22%) has reported strong, consistent growth over the past couple of years that's been nearly unmatched in the banking sector. Investors have been richly rewarded, especially over the past three years: 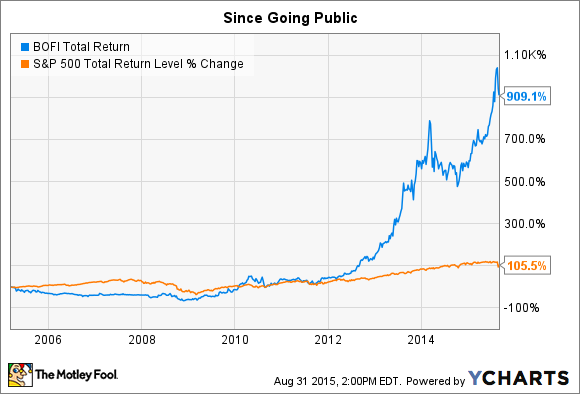 What am I watching for? In short, I'm selfishly watching for anything that Wall Street won't like, that may not really matter for the long-term. After all the stock fell more than 35% from March to October in 2014, and largely out of a change in sentiment, not fundamental weakness in the Internet bank's business.

As a long-term shareholder who's looking to own this incredibly low-cost operator for years to come, I'm closely watching for anything that Mister Market misconstrues as bad news, so that I can add more shares on a sell-off.

Compared to many of its peers BOFI Holding carries a very rich valuation, but continues to earn it because of its earnings growth rate and so-far solid execution. But it's likely to remain relatively volatile (It's down 13% since early August), and is heavily shorted, and that means any "bad" news could precipitate a big sell-off.

If that happens, I intend to take full advantage, and invest even more in this high-quality bank.

Matt Frankel: One stock that I'm definitely keeping an eye on in the second half of the year is PayPal Holdings (PYPL 0.39%).

There's no shortage of opportunity ahead for PayPal. After all, online and mobile payments are expected to balloon into a $25 trillion addressable marketplace as parts of the industry such as peer-to-peer payments and in-store mobile payments evolve.

The main reason PayPal was spun off from eBay was to create a company and management team solely focused on the payments business in order to maximize innovation and growth, and my curiosity is to see how it's working.

PayPal has grown tremendously in recent years, adding 19 million active users last year alone and producing outstanding grown in payments volume (57% since 2012), revenue (40%), and free cash flow (55%). And, the company has gone on a "shopping spree lately," acquiring smaller competitors with valuable technologies and relationships such as Xoom and Paydiant.

PayPal has projected revenue growth of around 15% over the next few years, which strikes me as a bit conservative given the rapid growth of the mobile payments industry and PayPal's size and ability to innovate. So, my curiosity during the third quarter and beyond is whether or not the newly focused PayPal can keep the company's momentum going, or even accelerate it.

Winners and Losers: 5 Stocks You Can Buy Now

3 Stocks to Own for the Next 10 Years

The Best Mutual Fund Giants of 2015