Please ensure Javascript is enabled for purposes of website accessibility
Log In Help Join The Motley Fool
Free Article Join Over 1 Million Premium Members And Get More In-Depth Stock Guidance and Research
By Todd Campbell, Tyler Crowe, and Timothy Green - Mar 8, 2016 at 8:29AM

It's been shown time and time again that when it comes to investing, thinking long term is a better bet than thinking short term, and while any number of things could go wrong that could derail the stock price for these three companies, our top Motley Fool contributors think they have what it takes to defend their spots in long-haul portfolios. Read on to find out why.

Todd Campbell: If you're young enough to take on a little bit of risk, owning shares in Regeneron Pharmaceuticals (REGN 0.84%) could pay off over the next decade.

The company's Eylea for age-related macular degeneration is hauling in billions of dollars per year in sales, and given that baby boomers are turning 65 at a staggering pace of 10,000 per day, demographic tailwinds supporting revenue should remain strong.

Eylea is a big reason why I like Regenerion, but the company's other drugs are intriguing, too. Last summer, it won FDA approval for Praluent, a cholesterol-busting therapy, and the FDA is expected to make a decision on its rheumatoid arthritis drug, sarilumab, in October.

Tens of millions of people already receive cholesterol-lowering statins, yet many of those patients don't respond adequately to them, and that means Praluent could potentially be used to combat high cholesterol in millions of patients someday. Similarly, 1.3 million Americans suffer from rheumatoid arthritis, and as a result, there's a big opportunity for Regeneron to carve away sales in that market, too -- especially in patients who don't respond to top-selling anti-TNF biologics, such as Humira. If Praluent and sarilumab can win a foothold in their respective indications, Regeneron could have three blockbusters on its hands in 2017.

Sure, Regeneron's shares aren't as cheap as others' healthcare stocks, but with one top seller to its name already and the potential for two other top sellers soon, this is one of my favorite long-term growth stocks.

Tyler Crowe: There are a lot of things that can be thrown a company's way over a 10-year period, so when looking at a time horizon that long, you want two distinct qualities in an investment: a business with strong competitive advantages that can fend off competition and disruption, and a management team that has a track record of long-term thinking and shareholder friendliness. It is for that reason National Oilwell Varco (NOV 4.04%) should be on anyone's radar as a 10-year buy-and-hold company.

I'm not going to sugar-coat it: This year and the next couple of years could be tough ones for National Oilwell Varco. Its bread and butter business is building both offshore and land drilling rigs, two markets that are wildly oversupplied right now and will likely take a couple years before they see new orders pick up again.

When those orders do come in, though, chances are they will go to National Oilwell Varco because it currently supplies about 80% of the offshore drilling market. In the meantime, though, it has its other dozen business segments like selling disposable and replacement parts that will see a turnaround almost the moment oil prices start to rise.

The other component of National Oilwell Varco is its management team. The company's origins date all the way back to the first drilled well in Titusville, Pennsylvania, in 1859, so the company has seen its fair share of boom and bust cycles. Also, management has been very smart about managing its finances such that it has maintained modest debt levels and plenty of cash to pay off any short-term needs.

With shares trading at its lowest price to tangible book valuation in over 20 years and the long-term demand for oil and gas still in tact, buying shares of National Oilwell Varco now and holding them for 10 years looks like a very compelling investment.

Tim Green: Apparel retailer The Gap (GPS 8.86%), which operates stores under The Gap, Banana Republic, Old Navy, and Athleta brands, had a rough 2015. The stock tumbled more than 40% as comparable-store sales slumped at most of its brands, and the company admitted to having huge quality issues during the fourth quarter. Other apparel retailers are winning share, and Gap is playing catch-up, attempting to transform itself and turn the business around.

Gap may not seem like a buy-and-hold kind of stock given these difficulties, but every apparel retailer goes through these types of issues at some point. Even in a difficult 2015, Gap generated $15.8 billion of revenue and $920 million of net income, and the stock trades for just about 12.5 times this depressed level of earnings. Gap has a long history, and this isn't the first time profitability has fluctuated. 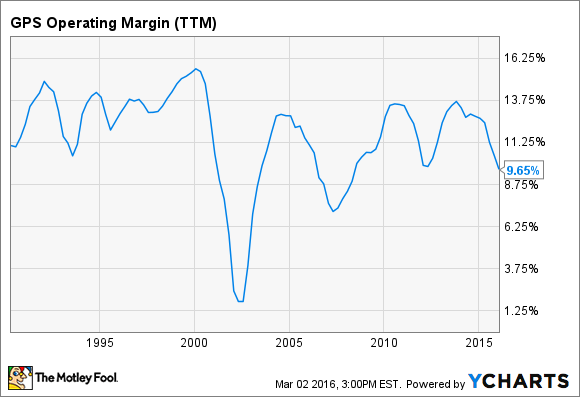 I think it's far too early to claim that Gap is facing an insurmountable challenge. Apparel is a tricky business, and no retailer can get it right all of the time. Gap is a giant in the business, and while it's difficult to say how long it will take for the retailer to right the ship, I think it's more likely than not that investors buying today will be happy with their decision 10 years from now.

This Is the Individual Investor’s Greatest Advantage

Unwanted Gift Cards? 3 Ways to Turn Them Into Cash