Please ensure Javascript is enabled for purposes of website accessibility
Log In Help Join The Motley Fool
Free Article Join Over 1 Million Premium Members And Get More In-Depth Stock Guidance and Research
By Brian Orelli, PhD - Sep 5, 2015 at 6:40AM

My fellow writers have written a lot about technical analysis here at The Motley Fool, and it's been entirely negative. I couldn't actually find a single article that endorsed the investment strategy. Here are just a couple of examples:

The reason Fools don't like technical analysis is because it bets that chart patterns will repeat. Which they actually do, sometimes.

And by sometimes, I mean completely randomly. As Anand Chokkavelu wrote in the first article linked above:

An October 2009 study by New Zealand's Massey University tested more than 5,000 technical analysis strategies in 49 different countries. The result? Not one strategy generated returns that aren't predicted by chance.

But I've found one chart pattern that I'm convinced will repeat itself, passing the test of time. I'm willing to bet on it, and I think you should too. (Anand is now my editor's boss, so I'm probably out of a job if I'm wrong.)

You can see LTBH pattern forming on this chart in red. 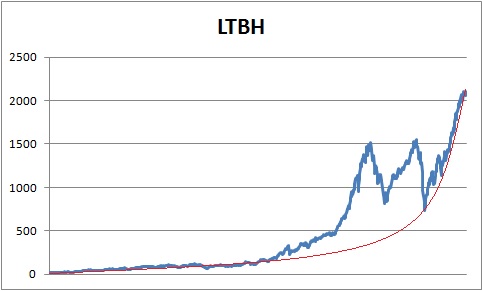 Some people find it hard to draw the curve. Fortunately, if you put the Y-axis on a logarithmic scale, you can draw the LTBH pattern in a straight line rather than a curve. The price typically goes through the chart pattern a few times, as you would expect. 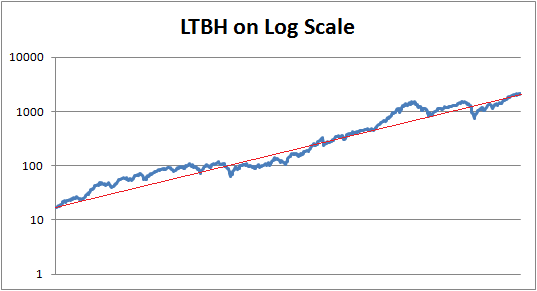 Here are a couple more charts that show the LTBH pattern -- all on the logarithmic Y-axis for easy charting. 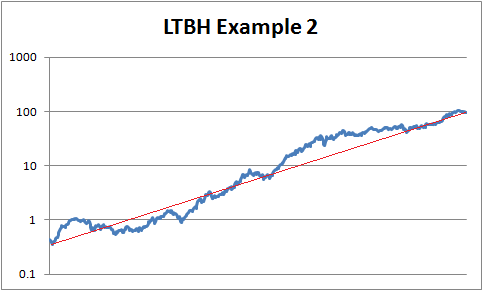 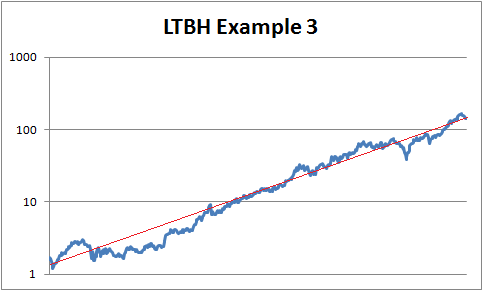 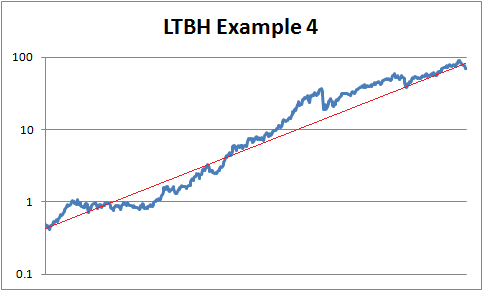 Tell me more...
At this point, I hope you're either salivating at the opportunity to cash in on an easy investment, or you're laughing hysterically because you've already figured out that LTBH doesn't stand for Little Trigger, Big Homecoming, but Long Term Buy and Hold.

The first two charts above represent the S&P 500 index from 1950 onward. Recent bear markets in the early and late 2000s are easy to pick out. Earlier bear markets, such as 1980 and 1987, when the index fell 27.8% and 33.5% respectively, are harder to see because their effects are minimized as the index grows. If you hold for long enough, you can be unfortunate enough to buy at the top, and still come out OK.

The latter three charts are Johnson & Johnson (JNJ 0.03%), 3M (MMM -0.43%), and Procter & Gamble (PG 0.91%), respectively from 1970 onwards. All three include returns from dividends. If you reinvested those dividends, the slopes of the lines would be even steeper.

Similarly, 3M, which started in 1902, has been able to adapt as technology has changed. It's not selling as much videotape or floppy disks as it used to, but those sales have easily been replaced by new products, including 3M's move into healthcare and telemedicine. Like Johnson & Johnson, 3M has been able to expand margins, allowing earnings to grow faster than revenue.

Procter & Gamble, which started in 1837, isn't usually associated with innovation, but that's only because it's not in a high-tech industry. There's still innovation in laundry detergent and potato chip flavors that allows for continuing sales. Just as importantly, marketing and distribution, especially in developing countries, has helped Procter & Gamble continue to expand sales and earnings.

Looking forward
While I'm confident that the LTBH will work for an index such as the S&P 500 over the long term, that's not necessarily true for individual stocks. As the disclaimers point out, "past performance does not guarantee future results."

LTBH is ultimately more of a plan than a requirement. If the company changes enough that the investment thesis changes, investors shouldn't be afraid to sell.

The challenge for investors is to separate legitimate sell signals from general downturns. After all, there are plenty of places in the above charts for Johnson & Johnson, 3M, and Proctor & Gamble where the price drops below the red line; but selling there would miss out on long-term gains.

The key for investors is to stop worrying about the stock chart and start focusing on the underlying business. If that's still intact, it's probably worth taking the short-term lumps on the stock chart rather than trying to manipulate it by timing a jump out and back in.