Pitting the two telecom giants against each other as income investments.

On the hunt for a stock that pays a meaty dividend? Then you're sure to come across the market's biggest telecom companies eventually. After all, Verizon (VZ 2.03%) carries the second highest yield among the blue chips in the Dow Jones Industrial Average while AT&T's (T 2.02%) yield ranks it No. 11 out of the entire S&P 500.

So, let's stack these two wireless dividend giants side by side to see which one makes the better buy for income investors right now.

Here are a few key investment statistics to get us started:

AT&T: becoming a different company
The big attraction to AT&T as an income investment boils down to this: Things are rough but about to get better. While its current yield is impressive at 6%, its growth and payout metrics just plain stink at the moment. Management boosted the dividend by only 2% in each of the last two fiscal years. And that slow-growing payment isn't well covered by AT&T's operations. The payout ratio in 2014 was 146%, meaning it sent out more in dividend checks than it managed to generate in net income. 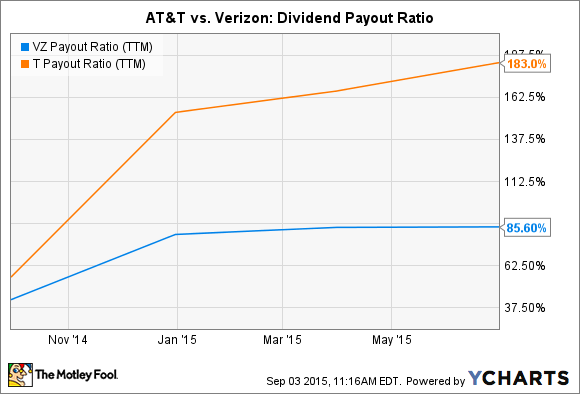 The picture isn't much better when you zoom out, either. AT&T has earned $33 billion over the past three years while paying out $29 billion, or a full 90% of profits, in dividends.

But executives believe company finances will begin improving now that it has completed the $48 billion purchase of DIRECTV. "We're a different company than when we began the year and it shows in what we'll be able to offer customers and in our financial outlook," CEO Randall Stephenson said in an investors conference last month. AT&T's updated outlook calls for ample free cash flow over the next three years and a dividend payout ratio that plummets down to the 70% range.

Verizon: already strong results
Verizon shareholders have more to go on than just forecasts from the executive team; they're already seeing the type of financial results that point to future dividend growth. Profit amounted to $10 billion last year, enough to easily cover the $7.8 billion dividend commitment. And operating cash flow is up to $19 billion through the first six months of 2015, compared to $15 billion in the prior year period.

Recent key business improvements include rising wireless subscriber numbers, profitability, and revenue per user, along with the lowest customer loss rate in three years. Those solid operating results have given management confidence to approve heftier dividend raises lately: 4% last year and 3% in 2013. 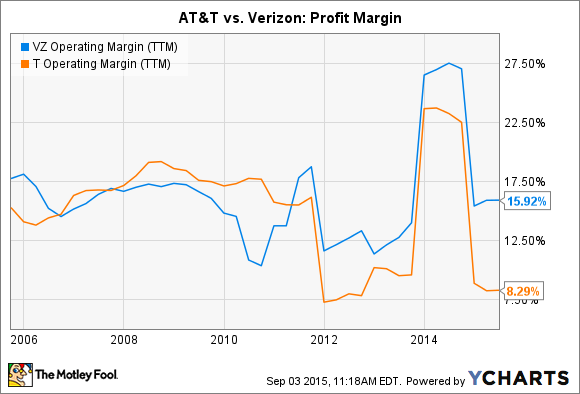 At the same time, Verizon is making big investments in future growth, having spent $18 billion on wireless spectrum licenses and network upgrades in the last six months. It also dropped an additional $4 billion to buy AOL's digital and mobile video business this summer.

Foolish bottom line
Wall Street sees Verizon's sales growing at a much slower pace than its rival telecom. Revenue should improve by 3% this year compared to a DIRECTV-powered 15% for AT&T.

That gap could explain why investors are willing to pay 33 times earnings for AT&T while Verizon is valued at 19 times last year's profits. But conservative income investors might still prefer slower-moving Verizon. Its dividend is more secure and has a clearer path for above-average growth over the next five years.