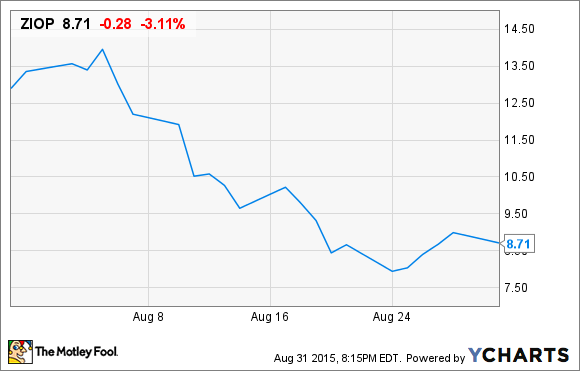 Shares of Ziopharm Oncology (NASDAQ:ZIOP), a clinical-stage biotechnology company that's attempting to use gene expression to treat cancer, were clobbered in August, losing 35%, according to data from S&P Capital IQ.

Why the monumental drop? It likely boils down to Ziopharm's second-quarter earnings release and a shift in sentiment toward the biotech sector.

The big culprit appears to have been Ziopharm's Q2 earnings release on Aug. 10, because its stock has been in a perilous slide ever since. For the quarter, Ziopharm reported $272,000 in revenue (remember, this is a wholly clinical-stage company) and a loss of $14.2 million, or $0.11 per share. Year over year, Ziopharm's net loss more than doubled from $5.6 million. Comparatively, Wall Street was actually looking for a more substantial loss of $0.32 per share, but it also expected closer to $1.65 million in revenue. It's also worth noting that general and administrative expenses rose by 133% during Q2 to $7 million.

The other factor at work here is investors' deflating opinion of biotech stocks following our first correction in four years. This doesn't indicate that Ziopharm's pipeline of gene controlling therapies doesn't have promise so much as it emphasizes that biotech stocks like Ziopharm are driven by projections and emotions, rather than fundamentals, unlike most other sectors of the market. With much of Ziopharm's pipeline still in the discovery or preclinical stages, skeptical investors took the opportunity to pounce on its $1 billion-plus valuation.

The big question now is whether or not Ziopharm can regain its losses at some point in the future. To that end I'd suggest it's possible, though the pathway to any future gains will be riddled with twists and turns.

Ziopharm and its collaborative partner Intrexon are at the heart of CAR-T cancer immunotherapy research, arguably one of the hottest cancer research pathways being explored at the moment. Ziopharm's ability to control genes coupled, with Intrexon's RheoSwitch technology for turning genes on or off, could be the key to tackling a variety of cancers. Because the combined technology is first-in-class (although unproven as of yet), it could command a buyout from a larger company seeking exposure to CAR-T or cancer drug development in general.

But Ziopharm's lack of profits and extremely young pipeline could also hold its stock price back. Until we see demonstrable evidence of CAR-T's success in treating cancer, Ziopharm will remain a high-risk stock.