Please ensure Javascript is enabled for purposes of website accessibility
Log In Help Join The Motley Fool
Free Article Join Over 1 Million Premium Members And Get More In-Depth Stock Guidance and Research
By Rich Smith - Sep 10, 2015 at 9:44AM

A miserable earnings report can't keep Navistar stock down. But why can't it? 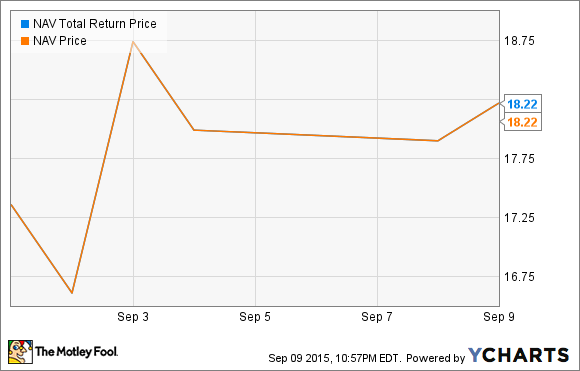 Heading into earnings last week, Navistar International (NAV) shares cost just $17 and change. One week later, Navistar stock closed at $18.20 on Wednesday -- but the route from that Point A to the current Point B was anything but a straight line up.

What Navistar said
Fact is, before moving to its recent $18-plus levels, Navistar stock took a pounding last Wednesday, after the truck maker reported Q3 revenues of just $2.5 billion, down 11% year over year, a $28 million net loss for the quarter, and a per-share loss of $0.34 -- 17 times more than the company lost in Q3 2014.

Although Navistar isn't losing nearly as much money this year as last year (by this time in 2014, the company had racked up $6.73 per share in losses), it's certainly not looking healthy. Losses through the first three quarters of fiscal 2015 now total $1.64 per share. Accordingly, no one could have been terribly surprised to see Navistar stock tumble 4% the day earnings came out.

Indeed, the real surprise is that Navistar didn't fall further -- and that to the contrary, on Thursday, the company's stock bounced right back.

The big reveal
This is a surprise because, in addition to the miserable sales and "earnings" (i.e., losses) news, Navistar also revealed last Wednesday that the company has received Wells Notices from the Securities and Exchange Commission. (Indeed, Navistar received these notices two weeks before earnings were released, but hadn't told anyone about this until just last week.)

Essentially, what these Wells Notices mean is that the SEC may be preparing to "file an enforcement action against the Company and its former chief executive officer, Daniel Ustian, alleging violations of the Securities Exchange Act of 1934" and other laws related to "various accounting and disclosure issues." Addressed in the company's 10-Q filing with the SEC -- but not in its earnings release -- Navistar warned that such an investigation could potentially lead to the SEC imposing "an injunction, a cease-and-desist order, and/or civil money penalties" on the company.

Asked about the Wells Notice issue on the company's post-earnings conference call, management did not explain what specific "accounting and disclosure issues" were in question. Indeed, all that Navistar would say was that "we really can't comment on this as it may develop into pending litigation." Which is probably not what investors were hoping to hear.

Press reports later clarified that the disputes seem to involve a Justice Department action against the company, though, alleging sale of "7,750 diesel engines that didn't meet 2010 emissions standards" and seeking "about $290 million in civil penalties," and also an SEC investigation of an alleged overstatement of pre-tax profit "by about $137 million from 2001 to 2005." (Chances are, investors probably wouldn't have been happy to hear about that,either.)

Unbreakable Navistar?
Nevertheless, after dropping 4% in response to the Wells Notices revelation, and the poor earnings report Wednesday, Navistar shares rebounded sharply last Thursday, jumping nearly 13% on a day when the S&P 500 was relatively quiescent. Why?

With no news releases to explain Navistar's rebound, and nothing to discover in the earnings report that might suggest the initial sell-off was an overreaction, there seems to be only one other explanation: According to Yahoo! Finance figures, as of mid-August, nearly 49% of Navistar stock had been sold short by investors betting on bad news coming out in early September. Once that bad news did come out, the stock quickly rebounded. The most likely explanation for this, therefore, is that short-sellers capitalized on Navistar's bad news Wednesday by buying back stock to close their positions, and pushed Navistar shares higher on Thursday as a result.

For now, this is just speculation. But if Yahoo! Finance next updates Navistar's "short interest" to show a significant reduction in the number of shares sold short, we'll know for sure that those shares were bought back -- and I'll bet I can guess on what day they got bought back, too.