Please ensure Javascript is enabled for purposes of website accessibility
Log In Help Join The Motley Fool
Free Article Join Over 1 Million Premium Members And Get More In-Depth Stock Guidance and Research
By Andrés Cardenal - Sep 11, 2015 at 8:00AM

An image says more than a thousand words, and these charts prove that Netflix is firing on all cilynders.

Even after a recent pullback, Netflix (NFLX 2.90%) stock is firing on all cylinders; shares of the online streaming leader have more than doubled so far in 2015. This usually raises some eyebrows among the sceptics: Is such a strong performance based on solid fundamentals, or is Netflix stock being driven by investor sentiment and speculation?

Make no mistake, Netflix stock is on fire because the business is doing extraordinarily well, and here are three charts to prove it.

Booming subscriber growth
The main reason Netflix stock is booming is because subscriber growth is downright amazing. Even in a relatively mature market such as the U.S., the company continues adding new members at an impressive rate, and everything indicates that Netflix is positioned for explosive international growth in the years ahead. 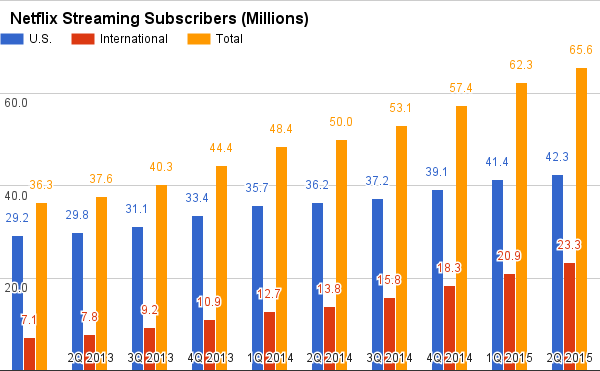 Netflix has 42.3 million members in the U.S., and it gained 0.9 million new members in the country last quarter versus 0.57 million new additions in the second quarter of 2014. Even as Netflix increases its market penetration levels at home, growth rates remain quite vigorous.

The company has enormous room for growth in international markets, and management has recently announced an acceleration of its global expansion plans. Netflix is planning to expand from nearly 50 countries currently to 200 markets by 2017. With this in mind, it makes a lot of sense to expect continued acceleration in international growth over the coming years.

Rock-solid competitive strength
In a capitalistic economy, competition is the name of the game. When a company such as Netflix is obtaining explosive success, chances are that multiple different players will enter the industry and try to steal a share of the pie. For this reason, competitive strength is of utmost importance when investing in growth companies operating in such a dynamic environment.

The following chart from Sandvine shows that Netflix is the undisputed industry leader, and its competitive position has even gotten stronger over the last several years.

The main source of Netflix's competitive strength is high-quality exclusive content. The company has achieved massive success with productions such as House of Cards and Orange is the New Black, and it's now replicating that strategy in international markets with series such as Narcos, filmed in Colombia, with Brazilian star Wagner Moura playing the role of Pablo Escobar.

Rising profitability
Content is expensive, and this puts significant pressure on profitability figures for companies in streaming. On the other hand, Netflix is doing a great job at delivering both growing revenues and expanding profit margins in the U.S., proving that the company doesn't need to perpetually lose money to sustain growth.

Contribution margin rose to 33.1% of revenue in the U.S during the second quarter. Management has a long-term target of achieving a contribution margin of 40% in the U.S. by 2020, and it believes things are running ahead of plan because of higher than anticipated revenue growth and moderate increases in content and other streaming costs. 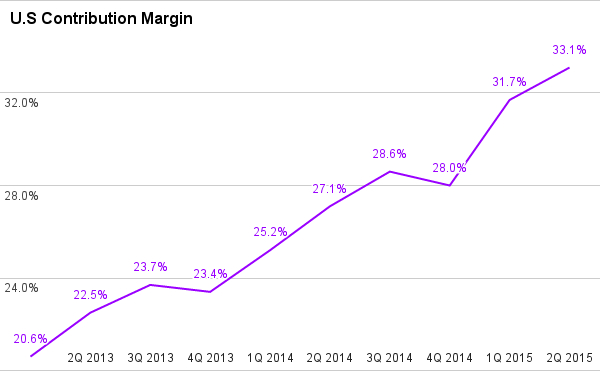 The business is already profitable on a contribution basis in established international markets. However, since Netflix is heavily investing for global growth over the coming years, the international segment will most probably remain at a loss over the middle term.

The main point is that Netflix is not only experiencing explosive growth on the back of its market leadership in the much promising online streaming industry. The company doing so while also proving to investors that it can deliver rising profit margins over time. All things considered, it's really no wonder Netflix stock is doing so well.