What: Shareholders of Keryx Biopharmaceuticals (KERX), a drug developer with a focus on renal disease, had another bad month as the company's stock fell more than 17% in August, according to data from S&P Capital IQ. 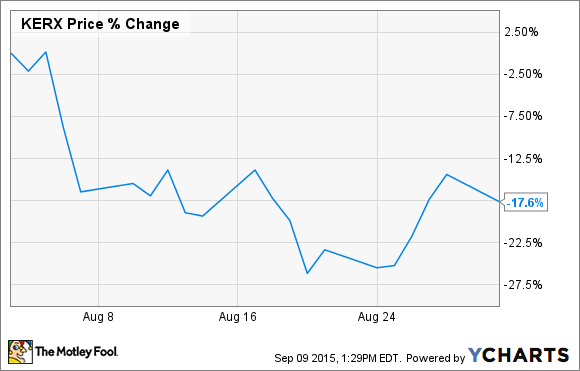 So what: A poorly received quarterly report caused several analysts to lower their price targets for the company, which when combined with an increase in short selling of its stock pushed shares lower during the month.

During the second quarter, it was able to generate 3,700 prescriptions for Auryxia, its only approved drug that helps regulate serum phosphorus levels in patients on dialysis, which generated a total of $1.8 million in sales. When combined with licensing revenue, the company posted total revenue of $2.5 million during the quarter, shy of the $3 million the pros were expecting.

In an effort to help build awareness for the drug, management announced that they will be adding 30 new sales representatives to its salesforce, a 50% increase from the current total. In addition, insurance access through Medicare Part D is starting to become easier, as the company estimates that 65% of patients who want the drug can now get coverage.

Across the pond, the company continues to wait for news about the drug's approval in Europe, and given that the European Medicine Agency's Committee for Medicinal Products for Human Use has already adopted a positive on Auryxia's sale, I'm betting on good news for the drug, which in Europe goes by the brand name Fexeric. Management expects to hear news about the drug's potential approval in the next few months.

Now what: Keryx is a bit of a paradox right now. On the one hand, there are plenty of reasons to like the company, as the market opportunity for Auryxia in the U.S. and Europe appears to be quite large. On the other hand, the stock has pretty much gone straight down since Auryxia launched earlier this year, and analysts and short sellers alike have put tremendous selling pressure on the shares.

Keryx's stock is currently in "show me" mode, and it's doubtful that they will win back a bullish sentiment unless they start to surprise investors on the upside. Bulls and bears alike should be bracing themselves for a continued bumpy ride in this heavily shorted name.

Brian Feroldi has no position in any stocks mentioned, and neither does The Motley Fool. We Fools may not all hold the same opinions, but we all believe that considering a diverse range of insights makes us better investors. The Motley Fool has a disclosure policy.