The price of oil might be down, but that hasn't had nearly the detrimental impact as one would expect thanks to these important cost-saving innovations.

The sun isn't setting on shale drilling, thanks to these cost-saving innovations. Image source: William Gray via Flickr.

Oil was first discovered in the Bakken shale of North Dakota in 1951. However, that oil stayed trapped within those tight rocks for nearly 60 years. It wasn't until the new technological innovations of hydraulic fracturing and horizontal drilling were combined that the Bakken finally started to give up its oil. It also didn't hurt that the price of oil was north of $100 a barrel, so there was an economic incentive in place to drill expensive shale wells.

It is in fact the cost of shale drilling that led many to believe that the plunge in price from $100 to $50 would kill the shale revolution. That hasn't proven to be true. While shale drilling has slowed, it hasn't been upended, thanks to a very dramatic drop in drilling costs as well as other innovations that are saving companies money during these tough times. Here are three cost-saving drilling innovations that are not just keeping shale alive but enabling it to thrive in the current environment.

Jason Hall: Historically speaking, the biggest cost factor for oil production was simply drilling the wells. We are only a few decades removed from drillers regularly drilling a well and getting zero oil.

Those days are long gone.

Not only has the technology to locate reserves jumped ahead light-years since those days, but the techniques to actually get to them -- the way producers can now drill -- have advanced just as much.

You're likely familiar with terms like horizontal drilling and fracking, which are techniques that allow oil producers to fracture "tight" shale formations to release trapped oil and natural gas, and to literally turn the drill bit and drill a mile or more horizontally away from the well head to reach reservoirs.

But one of the innovative aspects of horizontal drilling gets little attention: multi-pad drilling. Multi-pad drilling is a major time- and cost-saver for oil and gas producers, since the drilling rig only has to be moved as little as 20 feet before the next well can be drilled.

Think about it this way: Every individual oil well requires access roads, pipelines to collect the oil, electricity, and worker facilities while drilling is taking place. If a driller only has to deploy these resources once for four or more wells, versus having to do it every single well, we're talking potentially millions of dollars in savings for each well drilled, not to mention the reduced time.

Matt DiLallo: Speed is an oft-overlooked factor that is driving down drilling costs. The time it takes to drill each well is dramatically falling because companies are using more efficient drilling rigs. These rigs, combined with multi-well pads and the simple fact that drillers now have more experience drilling through shale formations, are decreasing the time it takes to drill a well. We can see the dramatic improvement in drilling time and its impact on well costs on this slide from a Chesapeake Energy (CHKA.Q) investor presentation: 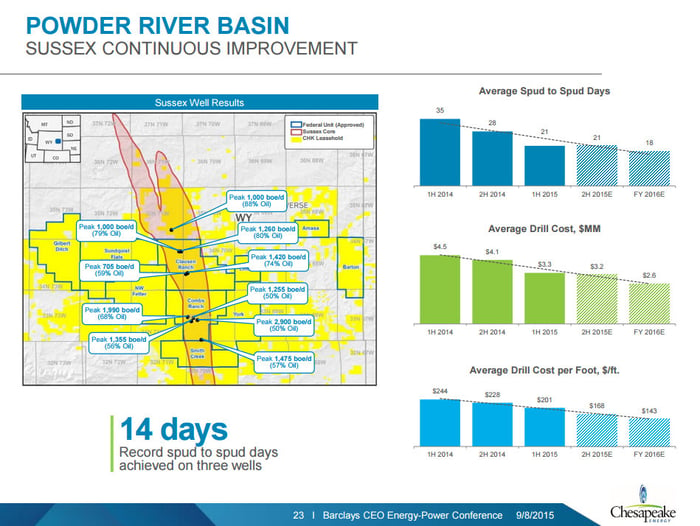 As that slide notes, Chesapeake Energy went from 35 days to drill a well and move to the next location down to just 21 days this year. By cutting two weeks out of its drilling time, the company is not just saving money on the dayrate on the rig, but is also reducing "man hours" both for its staff and its contractors. This is why its well costs are steadily falling as it picks up drilling speed.

The net result is that Chesapeake Energy's drilling costs in this particular play are down 42%, which really helps to mitigate some of the sting of lower commodity prices.

Adam Galas: It's said that necessity is the mother of invention, and the oil crash is definitely forcing oil producers to find ways to maximize returns on investment and lower per-barrel production costs.

One potential way to do this, which is already being used by major oil companies such as Devon Energy and Chesapeake Energy, is refracking older wells. In fact, according to Bloomberg, there are 50,000 U.S. oil wells that are candidates for refracking, which can cost around 75% less than drilling and fracking a new well.

According to Rod Skaufel, president of BHP Billiton's shale business, the reason that refracking hasn't taken off yet is that the lack of information about where exactly within the shale to target new frack fluid made this technique the equivalent of "pump and pray."

However, new technology by oil service companies such as Halliburton (HAL -1.04%) is removing the guesswork, and as Skaufel told Bloomberg, "Clearly if you could make this work, it allows you to have a more cost-effective program under these [oil] prices. That's why we're excited about the concept."

In order to finance its growing refracking business while still pursuing its acquisition of Baker Hughes, Halliburton recently struck a $500 million financing deal with Blackrock Inc. to help cover the cost of refracking customers' wells. According to Halliburton President Jeffrey Miller on the company's recent earnings call, "Though [its] a relatively small market today, we see significant runway for refrac[k] in the future."

Adam Galas has no position in any stocks mentioned. Jason Hall owns shares of Chesapeake Energy. Matt DiLallo owns shares of BHP Billiton Limited (ADR). The Motley Fool owns and recommends Halliburton and owns shares of Devon Energy. We Fools may not all hold the same opinions, but we all believe that considering a diverse range of insights makes us better investors. The Motley Fool has a disclosure policy.