Please ensure Javascript is enabled for purposes of website accessibility
Log In Help Join The Motley Fool
Free Article Join Over 1 Million Premium Members And Get More In-Depth Stock Guidance and Research
By Jason Hall, Dan Caplinger, and George Budwell - Sep 13, 2015 at 8:01AM

In your 60s? You should still own stocks. Here's a look at 3 that our contributors think are perfect for your portfolio.

In your 60s? Your golden years could last decades. Stocks can help you meet your long-term needs.

A common misconception for people in their 60s is that they should avoid stocks. And while it's certainly true that capital preservation with assets you'll need for income in the next three to five years is important, you still have a couple of decades ahead of you -- meaning that you'll need a long-term growth plan as well.

That means you'll still need stocks if you want the best chance at the best long-term returns. With that in mind, we asked three of our top contributors to give us an ideal stock someone in their 60s should own, and they offered up one of the best, safest big banks in Wells Fargo & Co. (WFC 3.35%); consumer goods and pharmaceutical giant Johnson & Johnson (WFC 3.35%); and one of the most recognizable (and profitable) names in global entertainment, Walt Disney (WFC 3.35%).

Jason Hall (Wells Fargo): If you're in your 60s, your financial plan is likely to include three things: Income and capital preservation for your near-term retirement needs; long-term growth since you still have 20 years ahead of you; and a legacy that you leave for your spouse or heirs.

Wells Fargo is a great stock for someone in that position, standing as one of the best-run major banks in the U.S. Not only has Wells management guided the company through recessions and banking crises for decades, but they have done so while leading the bank to market-crushing shareholder returns: 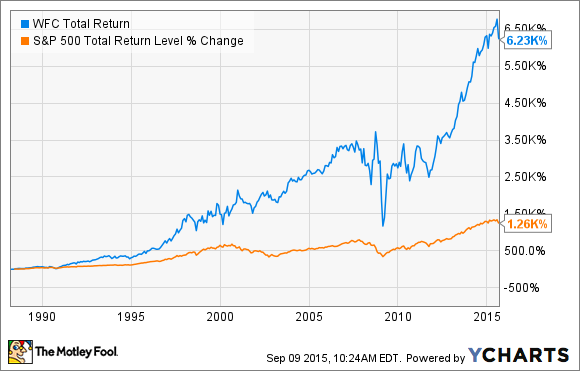 It may be difficult for Wells Fargo to grow much larger in coming years, but between rising interest rates, a generally improving domestic economy, and one of the best management approaches to risk management in commercial banking, this megabank looks set to continue giving market-beating returns for years to come.

And that makes it an ideal candidate for the portfolio of someone looking to preserve capital and generate income, while still having upside for the long-term.

George Budwell (Johnson & Johnson): When investing in stocks in your 60s, I think two key themes should be pervasive throughout your portfolio, namely dependability and sustainability. That's why I think the dividend-paying healthcare giant Johnson & Johnson would be a great pick for an older individual.

Given that J&J has been selling Band-Aids, baby powder, and numerous other well-known consumer products for about a century now, this stalwart can certainly check off the "sustainability" box. Its stock also passes the "dependability" test in spades in light of the fact that J&J is a "dividend aristocrat" that has raised its dividend for 53 consecutive years in a row at this point. 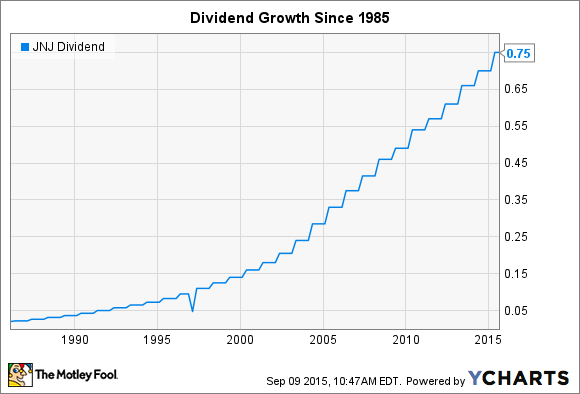 Even though J&J is a mature healthcare company, it shouldn't be viewed as a stodgy large-cap, devoid of compelling growth prospects. After all, J&J is considered to be a leader in the world of pharmaceutical research and development, with the company on track to potentially bring 10 new blockbusters to market within the next four years. That's on top of the 14 new medicines J&J has brought to market since 2009.

Thus, J&J offers a lengthy history of dividend increases, strong cash flows that have proven to be sustainable over a long period of time, and a top notch growth driver via its industry-leading pharma pipeline.

Dan Caplinger (Disney): People of all ages can appreciate the money-making juggernaut that is Walt Disney. For decades, Disney has captivated generations of loyal customers in their childhood, with its impressive combination of movies and other content, destination theme parks, and associated merchandise. The development of Disney's television-network empire has taken the company in a completely new direction, but the diversification that its landmark ESPN sports network and Disney's other properties in broadcast and cable TV has not only given the company some balance but also has opened up brand new cross-marketing opportunities for its other businesses. Major acquisitions of Pixar, Marvel, and Lucasfilm have dramatically broadened the available content for Disney to use, and excitement is building over new installments in the Star Wars realm as well as other established franchise themes. 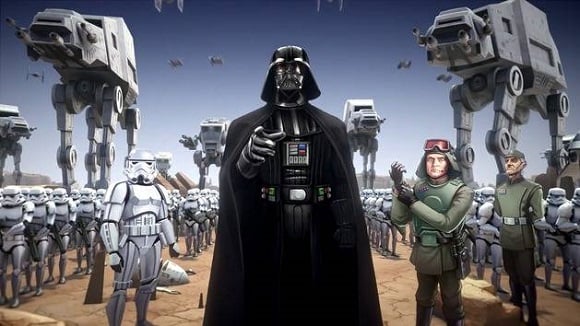 Star Wars is one of more than a dozen billion-dollar Disney franchises. Source: Disney.

For older investors, the downside for Disney is that its dividend yield is relatively small, with the stock currently paying just 1.1%. Yet from a capital-gains perspective, Disney's performance has been phenomenal, with the stock having hit record highs repeatedly over the past three years. Given the pipeline of new entertainment franchises and the opportunity for the company to work its magic to squeeze as much profit as it can from its content, Disney has plenty of potential to keep building itself up for the foreseeable future.