Falling commodities prices have crushed commodity stocks, but these could be worth buying today.

It goes without saying that commodities tend to be among the most volatile sectors to invest in, simply because no one knows where commodity prices will head next. True to their reputation, nearly every key commodity including oil, natural gas, gold, copper, and iron ore have been hammered over the past year, taking investors in commodity stocks for a ride.

Nevertheless, some commodity stocks appear to have taken a bigger hit than they deserve, largely because of the widespread panic in the sector. While it's impossible to say when commodities will bottom, these fundamentally strong-yet-battered stocks could turn out to be excellent turnaround plays as the cycle turns. Here are three such interesting commodity stocks that our contributors consider worth buying now.

Bob Ciura: I'm of the opinion that it's time to buy oil stocks and, in particular, BP plc (BP -0.88%). There are a few key reasons why I like BP right now. First and foremost is the dividend, which recently reached a hefty 7.7%. Of course, the reason why BP's dividend yield is that high is because of the steep declines in oil prices, which has weighed heavily on the company's fundamentals.

But there are some reasons to be optimistic about BP. One reason is, as an integrated major, BP has a large downstream business that is actually performing well as of late. This is because refining profits typically increase when oil prices decline significantly as it reduces refining feedstock costs, which boosts profit margins. For example, last quarter, downstream profits more than doubled to $1.9 billion from $700 million year over year. Overall, BP reported a $6.3 billion loss last quarter, but much of this was due to one-time charges that will not repeat.

BP took a non-operating pre-tax charge of $9.8 billion relating to its previously announced oil spill settlement. Separately, BP took a $270 million business restructuring charge, which also was non-operating, and wrote down the value of its Libyan assets by $600 million. Excluding all these one-time items, BP would have been solidly profitable. Despite its travails, it still generated $6.3 billion of operating cash flow last quarter, a relatively modest decline from $7.9 billion in the same period the previous year.

BP management has vowed that it can maintain its dividend, even at such low oil prices, thanks to its financial flexibility. Even if things get worse, BP generates cash flow, and can continue to sell assets and cut costs to preserve the dividend. For all these reasons, it's time to buy BP.

Adam Galas: I won't even pretend to guess where or when oil prices will bottom or how fast they'll recover, but when they eventually do, one oil stock I plan to own is frac-sand producer Hi-Crush Energy Partners (HCRS.Q).

There are a few reasons I like this MLP so much, the first of which its 14.1% distribution yield. Now, fair warning: Due to the oil crash, Hi-Crush chose to reduce its payout 30% recently, and should oil prices remain low for several years, it might cut the payout again.

However, given its enormous future growth potential and strong competitive position in its industry, I feel that Hi-Crush is paying long-term value investors very generously to wait for an oil industry recovery.

In fact, according to energy investment banking specialists Simmons & Co., in the Permian and Haynesville basins some wells are now using up to 30,000 and 17,500 tons of frac sand per well, respectively.

And that's not even taking into account the huge potential growth in old well re-fracking and currently incomplete, un-fracked oil and gas wells -- which together number around 54,000 -- to grow frac sand demand even more in the years to come. 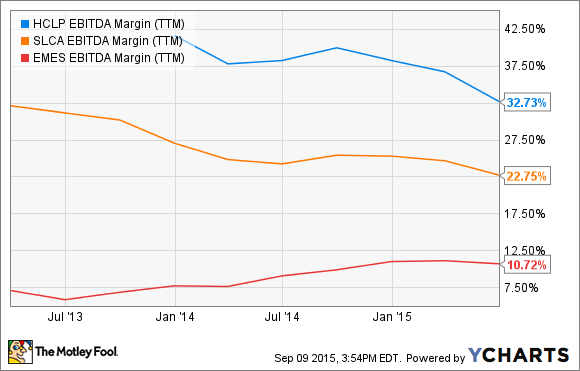 Combine the enormous growth potential for frac sand with Hi-Crush's industry-leading EBITDA margin -- courtesy of its excellent transportation and logistics network, which helps reduce cost/ton of sand -- and you can see why this is one high-yield oil MLP that I think deep-value income investors need to take a very close look at.

Neha Chamaria: An often overlooked yet key area in commodities is agriculture. Companies involved in agricultural commodities make great investment options as they deal in essentials like seeds and fertilizers that provide food to the world. One such agricultural stock that you can consider buying today is Potash Corp. (POT).

As the world's largest manufacturer of the three essential nutrients that help improve crop productivity -- potash, nitrogen, and phosphate – Potash Corp. has tremendous growth potential. Macro headwinds like lower crop prices that affect demand for fertilizers have sparked panic among investors and sent the stock plummeting nearly 29% year to date. However, this drop presents both value and dividend investors an excellent opportunity.

Potash Corp. currently sports a dividend yield of 6%  -- the highest in the industry. The company's free cash flow is growing steadily even as it continues to deleverage. As Potash Corp. nears completion of its multi-year expansion program, its capital expenditures are expected to decline substantially in coming years, thus freeing up more cash to return to shareholders. The company has grown its annual dividend more than 11 times since 2010.