Apple has already sold out of its initial launch inventory in China for the new iPhone models.

It seems like just yesterday that investors were freaking out about Apple's (AAPL 1.37%) business in China. Oh wait, that was last month when the market had a mini-meltdown about China's macroeconomic slowdown.

All the while, I've argued that the ongoing slowdown won't hurt Apple, considering the fact that China's economy has been slowing down for years, while Apple's China business has utterly skyrocketed the entire time. If you recall Economics 101, the four major components of GDP are personal consumption, investment, net exports, and government spending.

The important distinction for investors to recognize is that much of China's GDP growth over the past two decades has been driven by investment, government spending, and exports. China has been trying to prop up its headline GDP figures for years by accelerating infrastructure investments, which is probably futile. 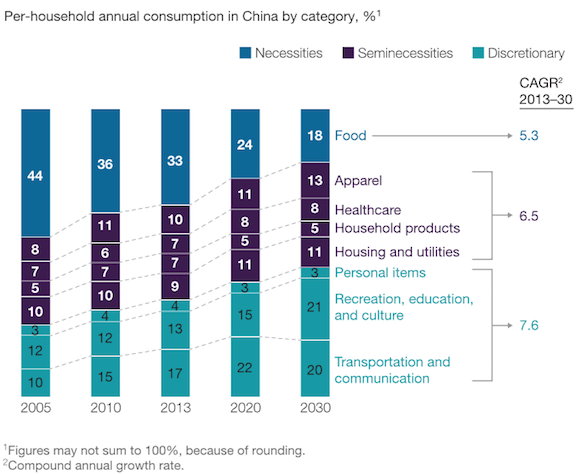 Discretionary spending categories are showing the fastest growth, a trend that is expected to continue. Source: McKinsey.

One consequence of this is that consumer spending as a percentage of GDP is trending lower, but in absolute terms the Chinese consumer is undeniably on the rise. In fact, China's consumption is growing faster than pretty much any other country in the world in absolute terms. Household income and discretionary spending are soaring as the middle class explodes. This is what matters for Apple.

Here's another encouraging data point for Apple. With preorders for the new iPhone 6s and 6s Plus starting last weekend, it looks like Apple has already sold out of its initial launch inventory.

Shipping times are already slipping
As first spotted by Re/code, shipping times for all models in China have quickly slipped. iPhone 6s orders are now quoting two- to three-week shipping, with 6s Plus orders showing three- to four-week shipping. 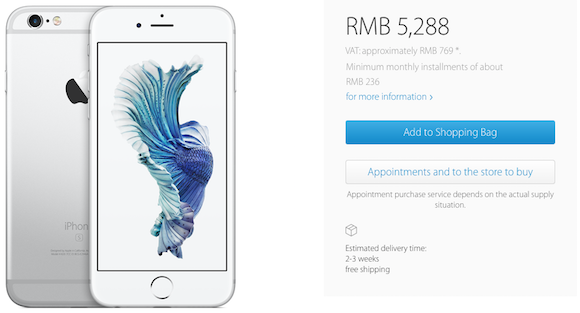 Meanwhile, many configurations in the U.S. on all four national carriers are still available for the Sept. 25 launch date. The iPhone 6s Plus seems to be supply constrained in the U.S., Canada, U.K., China, and Japan. Considering the added premium associated with the 5.5-inch models, that bodes well for Apple's average selling prices once the new models are launched.

Of course, no one knows exactly how much supply Apple allocated to each geographical market, so it's unclear how many units were talking about. The data points are indeed vague, yet directionally encouraging. Considering the importance and sheer size of the Chinese market, you would intuitively think that Apple allocated quite a bit of inventory to China, especially since Apple now sells more iPhones in China than in the U.S.

Apple is also standing pat on pricing in China, even with all of the foreign exchange headwinds that it's been facing all year that are causing the company to raise prices in other markets. Apple will either take the currency hit or simply hedge more to offset currency fluctuations.

But with all of the fretting over China, the data points just go to show that all of the slowdown fears truly are overblown and that Apple will likely have a busy launch season in The Middle Kingdom.

Evan Niu, CFA owns shares of Apple. The Motley Fool owns and recommends Apple. We Fools may not all hold the same opinions, but we all believe that considering a diverse range of insights makes us better investors. The Motley Fool has a disclosure policy.