Please ensure Javascript is enabled for purposes of website accessibility
Log In Help Join The Motley Fool
Free Article Join Over 1 Million Premium Members And Get More In-Depth Stock Guidance and Research
By Brian Orelli, PhD - Sep 14, 2015 at 2:06AM

bluebird bio (BLUE -2.29%) is well off its summer highs, but the gene therapy company is still having a solid year, up 44% since January. 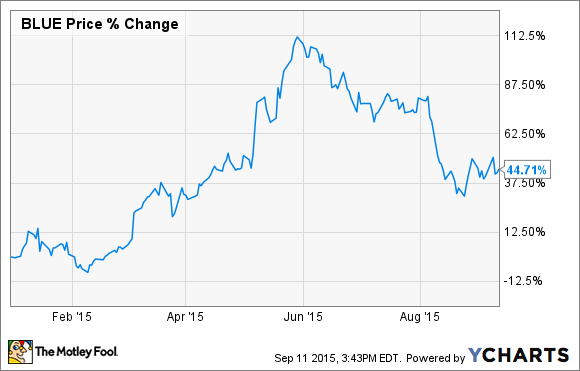 The downturn appears to have little to do with what bluebird bio has done -- or not done -- and seems to be more related to investors' jitters over the run up since shares had been more than double where they started the year. With three trials expected to produce data later this year, the discount could be a good time to buy.

bluebird bio's lead product, LentiGlobin BB305, is a gene therapy which adds a functioning copy of the hemoglobin gene in patients that have deficiencies or abnormalities. Cells are removed from a patient, the gene is added with a viral vector in the lab, and then the cells are added back to the patient, avoiding the transplant rejection seen when patients are transplanted with other people's cells.

Northstar Study (HGB-204)
The Northstar Study has enrolled 18 patients with beta-thalassemia, a disease caused by a mutation in the HBB gene, which leads to a reduction on the production of hemoglobin that's responsible for helping red blood cells carry oxygen through the body. Patients have to receive transfusions to keep their hemoglobin levels high enough. bluebird bio estimates there are 15,000 beta-thalassemia patients in the U.S. and EU with 60% to 80% considered severe.

At the Annual Meeting of the American Society of Hematology, or ASH, last December, bluebird bio presented data from the first five patients treated in the Northstar Study with the first two patients being transfusion independent for five months and three months at the time of the last follow up last year. The other three patients had been treated recently enough that there wasn't much bluebird bio could say at the time.

HGB-205
At ASH last year, bluebird bio presented data from HGB-205, which is enrolling patients with both beta-thalassemia and sickle cell disease. The sickle cell disease patient had just been transplanted, so there wasn't data available on that patient, but two beta-thalassemia patients had been free from the need for transfusions for the past 12 months and nine months, respectively.

Investors got an update on the HGB-205 trial at the Annual Congress of the European Hematology Association (EHA) in June, when bluebird bio said the two patients were still infusion independent, now 16 months and 14 months after their treatments.

More importantly, bluebird bio had data on the sickle cell patient, showing that 40% of the patient's hemoglobin was from the added gene and another 5% came from fetal hemoglobin, which also also doesn't sickle. At the time, the patient had been transfusion independent for more than three months without complications or hospitalizations related to sickle cell disease.

bluebird bio expects to complete enrolment of the study this year.

HGB-206
The HGB-206 is bluebird bio's first trial to enroll just patients with severe sickle cell disease. The first of up to eight patients was treated in June, but we don't have any data from the trial yet.

Data when?
bluebird bio has only said that updates from all three trials are expected this year. The obvious place to present the data would be at this year's ASH meeting Dec. 5-8. Abstracts for the presentations are scheduled to be published on Nov. 5, but the cutoff data for abstract -- other than a few that qualify for late-breaking status -- was Aug. 4, so investors may get very dated information in the abstract and have to wait for the actual meeting to see how well LentiGlobin BB305 is helping patients.

Investors should pay special attention to the Northstar and HGB-205 data because EU regulators have indicated that the data for those two trials will be sufficient for LentiGlobin BB305 to be approved to treat patients with beta-thalassemia in Europe.