Please ensure Javascript is enabled for purposes of website accessibility
Log In Help Join The Motley Fool
Free Article Join Over 1 Million Premium Members And Get More In-Depth Stock Guidance and Research
By John Rosevear - Sep 15, 2015 at 8:06AM

TrueCar president John Krafcik is leaving to run Google's self-driving car project. It's a coup for Google -- and another big hit for reeling TrueCar.

Google just hired TrueCar President John Krafcik to lead its self-driving car project. It's a coup for Google -- but a big loss for TrueCar. Source: Google.

Google (GOOGL -1.17%) said on Monday that it has named a respected auto-industry veteran as the new CEO of its self-driving car project.

John Krafcik, currently the president of car-buying service TrueCar (TRUE 0.96%), will join Google later this month, the company said. Before joining TrueCar, Krafcik was the head of Hyundai's North American unit, a job he assumed after spending much of his career at Ford.

Former Ford CEO Alan Mulally is a member of Google's board of directors.

Krafcik is a sharp and well-regarded executive. His hiring is a sign that Google is getting very serious about bringing its autonomous-car technology to market in some form.

It's also a sign that not all is well at TrueCar.

A potentially disruptive company that has struggled recently
TrueCar's stock has been a magnet for tech-savvy investors. It's not hard to see why: The company has been gaining ground in a space that's extremely ripe for a Silicon-Valley-style disruption: The process of buying a new car.

TrueCar partners with new-car dealers and collects data on thousands of new-vehicle sales. That data is used to provide potential buyers with a realistic market price for the new car they've been eyeing -- and a guarantee that a local dealer will honor that price.

The theory is that buyers and dealers both win: Buyers get a good no-hassle price, and dealers get a steady stream of customers. For the most part, it's working.

But last quarter, the company missed estimates in a big way, surprising investors with a big loss instead of the expected small profit. The stock dropped like a stone in the wake of the news. It has yet to recover. 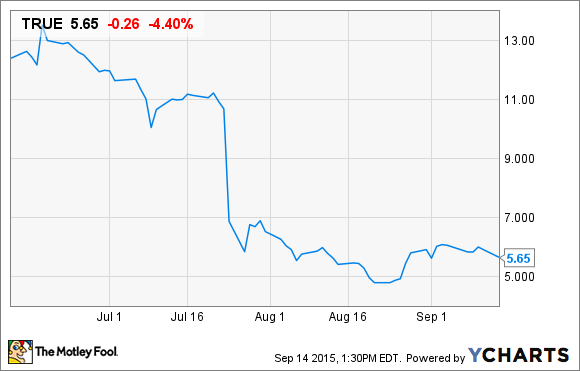 Management blamed "execution challenges" for the big miss. But that apparently didn't satisfy the board: Company founder Scott Painter was removed from the CEO role, although he remains on TrueCar's board.

TrueCar has been conducting a search for a replacement. Apparently, Krafcik won't be among the candidates.

Did Krafcik jump, or was he pushed?
TrueCar issued a statement on Monday lauding Krafcik's contributions, thanking him for his service, and noting that he (like Painter) will remain a member of the company's board.

It's not the kind of statement you'd expect to see if Krafcik had been fired. It's possible that he was quietly encouraged to move on. It's also possible that his new role at Google -- a plum gig for a tech-savvy auto executive -- would have lured him away from TrueCar even if its second-quarter results had been terrific.

Either way, it's not a leap to think that this doesn't bode well for TrueCar. I had been thinking that the stock was looking like an intriguing buy at its recent beaten-up levels, given that the company is still expected to generate plenty of revenue over the next two quarters.

But when the board fires your CEO, and the talented executive who is next in line leaves a few weeks later (for whatever reason), it's clearly a sign that something isn't going right. Stay tuned.