Which is the better choice for new money?

The healthcare sector has been a stellar performer in recent years, and for good reason. As the population ages, the demand for high-quality healthcare rises. Those who want exposure to this long-term trend but don't want to pick individual stocks might consider buying into a healthcare-focused mutual fund or index fund, as either can be a good investment alternative.

Two popular mutual funds with an exclusive focus on picking stocks from the sector are T. Rowe Price Health Sciences (MUTF: PRHSX) and Vanguard Health Care Fund Investor Shares (MUTF: VGHCX). Long-term investors in these funds have done well for themselves over the past several years, with the returns easily outpacing a similar investment in the S&P 500 over the past five years. But which one is the better bet today? 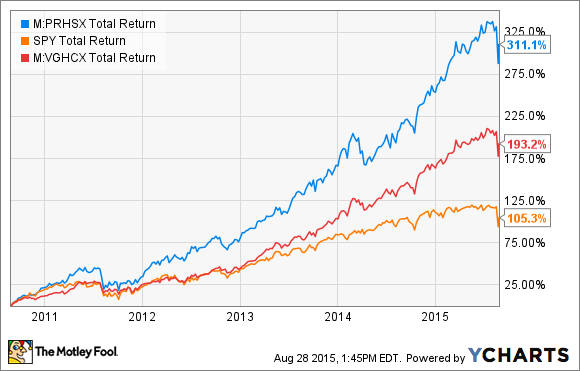 T. Rowe Price Health Sciences has obliterated the return of both the S&P 500 and the Vanguard Health Care Fund Investor Shares over the past five years. However, if investing were as easy as looking at a chart and picking the fund that went up the most in the past, we'd all be rich. To figure out which fund deserves our investment dollars today, we need to do some more work.

When I'm making an investment choice between two funds, it makes sense to pick a few key metrics that each fund offers and line them up side-by-side. Specifically, I like to look at the cost of the fund (measured by the expense ratio), tenure of the management team (measured in years), and tax efficiency (measured in portfolio turnover), as well as a few other factors.

Let's look at the numbers to help guide our decision-making:

However, the big number that sticks out to me is management tenure. While T. Rowe Price's five-year returns have been stellar, the fund's current manager, Taymour R. Tamaddon, only took control of the fund in February 2013. Given that a manager is responsible for picking which securities to buy in the fund, we can't credit Tamaddon with the fund's terrific five-year performance.

So let's compare the funds again, only this time looking at the period since Tamaddon took over: 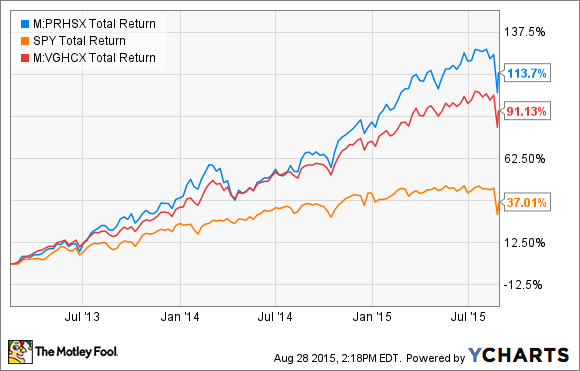 It appears Tamaddon hasn't missed a beat, and the fund outperformance has continued under his control.

Which is the better buy?
While I tend to give a strong preference to mutual funds that offer the lowest fees and the longest-tenured management team, I'm impressed with T. Rowe Price fund's ability to outperform in both the short and long term, and if forced to choose between these two it would get my vote. Investors in the fund are taking a little bit more of a leap of faith on Tamaddon's abilities to beat the market, and they're paying more in fees and taxes to do so, but if the fund can continue its strong outperformance, then those extra costs may be worth it.

Now what?
While it's natural to want to buy into mutual funds that have done well in the past, it's important to remember that past performance is no guarantee of future returns. While the markets in general have been on a great run over the past five years, the healthcare sector has really been on fire, and investors who bought even a passively-managed healthcare ETF such as Vanguard's healthcare ETF have handily outperformed the S&P 500. 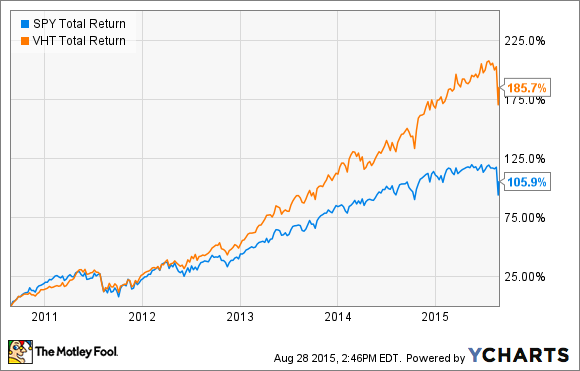 Investors have been bidding up the sector so much that the average price-to-earnings ratio in the healthcare sector, as represented by the Vanguard Health Care ETF, is currently at 24, far ahead of the S&P 500's 19.

Higher P/Es tend to indicate that investors are expecting much stronger growth from the sector than the stock market at large, and while I think healthcare can continue to grow nicely, it's possible the entire sector's P/E will revert to the market mean over time. If that were to happen, investors who get in today might be stuck with below-market returns.

For investors who want more exposure to healthcare and don't mind paying up for the chance of outperformance, I think T. Rowe Price Fund Health Sciences could make a fine choice. However, with such a high P/E, I suggest that that investors approach the entire sector with a healthy dose of caution.