Larry Page reportedly shut down a new ad product incorporated into Google Maps because it was too invasive. 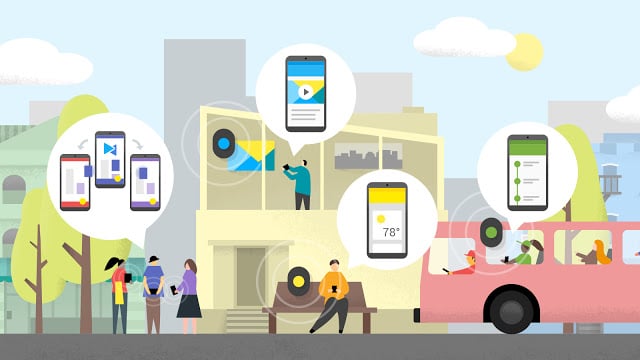 Google was working on a location-based ad platform that uses beacons. Source: Google.

Retailers started employing low-energy bluetooth beacons in some of their stores a couple of years ago. These beacons are capable of pushing notifications to shoppers' phones, but they required shoppers to already have the retailer's app installed. Google (GOOG -1.48%) (GOOGL -1.38%) had been working on a workaround to requiring shoppers to install a new app, called Google Here, but word has it that the company decided to scrap it recently.

With the number of privacy issues already plaguing Google, scrapping Google Here seems to be more of a PR decision than a business decision, but there are good business reasons to stop the release of the product. Let's examine what Google Here is, why Google didn't release it, and what its plans are for location-based advertising.

Google Here (are some pop-ups)
Google Here was built on top of the popular Google Maps app. Google Maps is the sixth-most popular app in the United States, according to Comscore, actively used by more than 50% of smartphone owners. It certainly gets a bump from being pre-installed on Android devices, but even Apple (NASDAQ: AAPL) iPhone owners often opt for the Google-owned map app.

With the app installed on so many phones already, it's capable of sending push notifications to a huge percentage of smartphones. Google planned to use bluetooth beacons to send push notifications through Google Maps instead of a retailer's app. Advertisers could design HTML 5 mini-sites that would load inside Google Maps offering coupons or asking people to download its own app.

Essentially, Google was selling pop-ups on users' smartphones. It's one thing if users have already expressed interest in a retailer by downloading its app, but completely unprovoked, it might be somewhat unnerving and annoying.

Why scrap it?
Alphabet CEO Larry Page reportedly put the kibosh on Google Here. Rumor has it there were two reasons for the shutdown: Google wasn't sure if retailers would sign up, and Page felt the product might be too invasive.

That second reason was likely more of a concern. Google is already facing privacy concerns for how it uses its users' data in its digital ad networks across search, display, and mobile. Apple has publicly taken a stance against companies like Google that rely on user data to sell ads, and it's updating its Safari browser with iOS 9 to block display ads because of the growing demand for less invasive advertising. Likewise, Apple added the privacy-supportive DuckDuckGo search engine to its list of search engines for Safari.

Adding an annoying and invasive advertising product to Google Maps might have caused many users to switch to a new mapping app. Considering Google already monetizes Google Maps with promoted businesses in searches like "Chinese Food," Google doesn't want to risk losing its audience, and it can likely find a more effective way to increase its revenue from Google Maps.

Google's other efforts in location-based tech
In July, Google introduced a new open format for bluetooth low-energy beacons called Eddystone. It's completely open-source and works across mobile operating systems. Additionally, there are multiple different frames developers can use to send messages to apps.

Retailers can use Eddystone beacons to manage a fleet of beacons throughout their stores. Eddystone includes APIs for developers to monitor battery health, if someone displaced a beacon, and other issues that may arise. They can send various messages to users, and Google may even let some beacons tap Google Now -- the personal assistant built into Android -- to provide pertinent information like transit schedules when you're sitting at a bus stop.

While Google won't benefit directly from the sale of Eddystone beacons -- which will be produced by third parties -- it can benefit from the wider proliferation of bluetooth beacons in general. If people get used to the technology, the company could develop an ad network that takes bigger advantage of beacons without being as invasive as Google Here.