Please ensure Javascript is enabled for purposes of website accessibility
Log In Help Join The Motley Fool
Free Article Join Over 1 Million Premium Members And Get More In-Depth Stock Guidance and Research
By Tyler Crowe - Sep 16, 2015 at 10:35AM

This is the closest thing you can get to owning your own oil well, for good and bad.

It's not very often you come across a stock that has a dividend yield of 17%, but that is right about where shares of BP Prudhoe Bay Royalty Trust (BPT 3.32%) trade today. Then again, it's rather understandable that many investors have passed on the opportunity since shares have declined by close to 70% over the past couple of years. 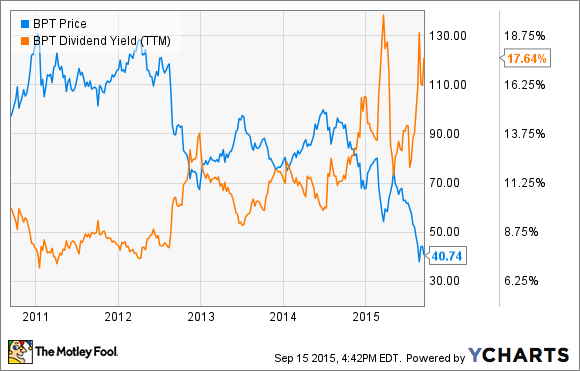 With shares trading this low, you might be wondering if perhaps today is a good time to jump on the weakness in oil prices. After all, even at today's low price environment it's generating royalty revenue. So, let's take a look at what the future might hold for the trust and see if that monstrous yield is a sign that it's unsustainable or if it's a market overreaction.

In a Royalty state of mind
Let's get one thing straight: holding BP Prudhoe Bay Royalty Trust stock isn't the same as owning shares in a company. It's ownership of royalty rights on a parcel of land that a company has drilled wells, and the operator on that property is obligated to pay you a percentage of the well's revenue. In the case of the BP Prudhoe Bay Royalty Trust, you are entitled to a royalty that is a 16.4246% working interest on the first 90,000 barrels per day of production from the property owned and operated by BP Alaska on its Prudhoe Bay field on the North Slope of Alaska. If the total production from the field is less than 90,000 barrels per day, then you get a 16.4246% working interest on whatever production comes from the property.

This is the average daily production from the field over the past five years: 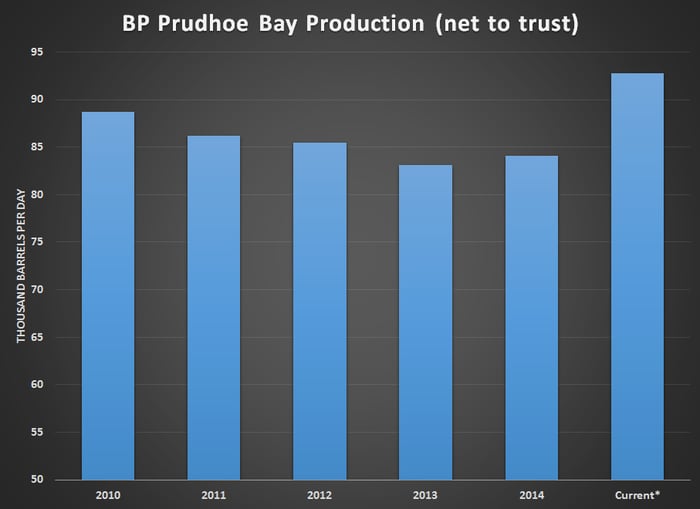 Another thing to keep in mind is that this is an investment with a terminal date. Under the trust's termination clause, the trust will be terminated once royalty payments become less than $1 million annually for two years consecutive. While the operator of the field believes that production from this field could last for many more years, the BP Prudhoe Bay Royalty Trust's economic models are done assuming that this terminal date will be reached in 2028.

So, rather than thinking about the BP Prudhoe Bay Royalty Trust as a buy-and-hold stock, here is a conservative way to think of it: This is an investment where the quarterly cash payments will need to be enough to recoup the cost of the share price plus whatever you deem a reasonable return over a set period of time.

Modeling it out
Let's assume that the BP Prudhoe Bay Royalty Trust will terminate in 2028 as the models say. So, what we want to know is whether we can expect to receive enough in quarterly royalty payments to justify paying the price for a unit of the trust today. Based on the most recent quarterly cash payment, today's share price, and anticipating a decline in payments at the same rate as production from the field -- annual decline of approximately 5% over the past 10 years -- until the termination of the trust, we can roughly model what kind of return we can expect from the trust, as seen in this chart: So, if we go on the idea that the trust will terminate in 2028, then we can reasonably assume that the quarterly cash payments will pay off the initial share price in 2022 and will generate a cash return of 62% by the projected terminus date. That would average out to a compounded annual growth rate of just over 4%. It's enough to beat inflation if you are looking to protect your principle, but not exactly enough to keep up with the long-term returns of the S&P 500.

Keep in mind that this is a very rough projection, which can change based on a lot of factors, that only takes into account the cash payments from the trust. The most obvious one is oil prices. If prices were to increase, then those quarterly cash payments could rise significantly. It should be noted, though, that the production costs charged to the trust have been steadily increasing as well, so the royalty per barrel produced could decline if oil prices remain constant and production costs increase. Then there is any gain lost on share prices, which is pretty much impossible to anticipate. 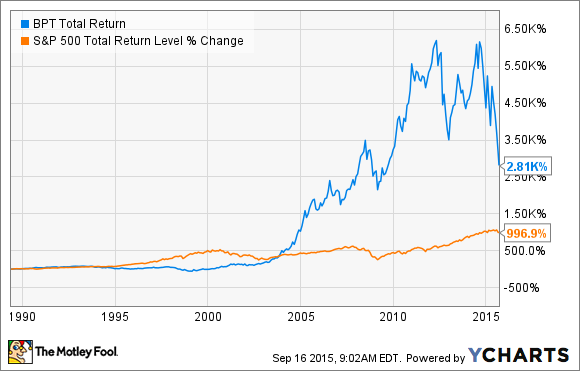 Speculating on oil prices has never been an effective way to make money over the long run. But if you are looking for a way to place a bet on oil prices that will pay you a decent dividend, investing in the BP Prudhoe Bay Royalty Trust today might be one of the better times to do so.