A quick trip to Chipotle will set you back about $10. Instead of using that money to buy a delicious burrito, consider these tasty stocks.

You be hard pressed to find a bigger fan of Chipotle Mexican Grill than me. I've been a happy shareholder for years, and for a person who really doesn't like fast food, I've spent more than my fair share of money at its restaurants over the years. Between the burrito, guacamole, chips, and the drink, every trip I take to Chipotle usually sets me back more than $10.

While that might not sound like much, spending $10 for lunch every day can add up. In fact, there are three healthcare stocks you could buy a single share of (neglecting commission for the time being) with that money instead.

1. Castlight Health (CSLT)
Despite posing some good results recently, Castlight Health, a cloud-based software provider that offers health information online to help inform medical choices and reduce insurance costs, has been a dreadful holding since it first hit the market. It's not that operating results have been bad -- it's that there was an insanely overpriced IPO.

Castlight appears to be making good progress selling its offerings, as the company now services more than 10% of the Fortune 500, which is a great sign for investors. In Castlight's most recent quarter, revenue jumped 76% over the year-ago period, coming in at $18.5 million. Gross margins also expanded to 58.3%, up nicely from 32.6% last year. As the company adds scale, it's showing that it can improve its margins.

While a single Castlight share will set you back less than $10, the more interesting metric is the company's price-to-sales ratio, which has fallen all the way to about 8 thanks to the abysmal stock performance. 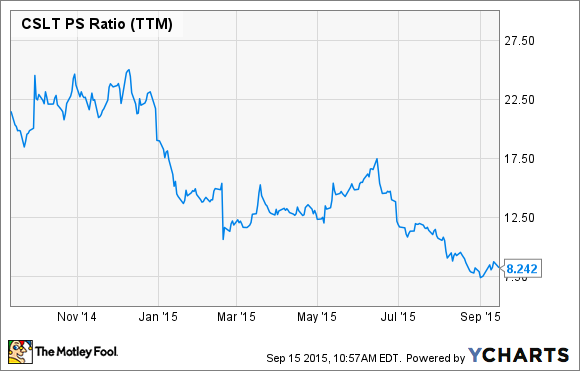 That's not cheap, but it's also not outrageously expensive for a scalable company growing as quickly as this one is. It's still a bit too high-risk for my taste, but if the company continues to show good results, I may be willing to change my tune.

Merrimack has a handful of compounds in clinical trials, but all eyes are on MM-398, a second-line treatment candidate for patients with pancreatic cancer. Pancreatic cancer is especially nefarious, accounting for only 3% percent of all cancer cases around the world but ranking fourth in cancer deaths.

This compound appears to hold some promise for helping treat the disease, and the FDA has granted it "priority review" status, with a response from the agency expected by Oct. 24. In Europe, marketing partner Baxalta has submitted the compound for regulatory review.

Peak sales estimates are hovering around $700 million for MM-398, which suggests there could be some good upside ahead if the drug is approved. Until we get definitive word on approval, Merrimack will remain a high-risk company, but it certainly holds potential.

3. Keryx Biopharmaceuticals (KERX)
Last on our list is Keryx, a biotech focused on renal disease that has successfully crossed the regulatory finish line but has been an awful performer so far this year. Its one and only drug, Auryxia, which helps regulate serum phosphorus levels in patients on dialysis, has been slower out of the gate than analysts were hoping for, sending shares tumbling. 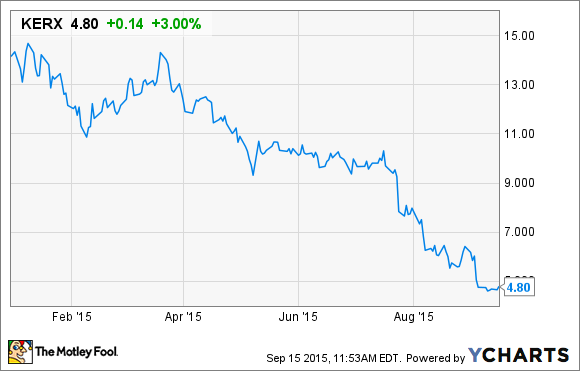 Limited reimbursement access appears to be the main cause of the slow start, though management noted that coverage has gotten better since the start of the year. Management appears to be doubling down on Auryxia, as it recently added to the company's sales force in an effort to raise awareness for the drug, and the odds look good that Europe will soon approve it for sale.

If these catalysts pay off and help drive up sales, then Keryx stock could about-face and turn out to be a winner from here, but this stock is firmly in "show-me" mode, and until the company can demonstrate a huge uptick in sales, I'll be keeping my investment dollars away from this name.

Would you prefer a burrito or a stock?
While the shareholder in me would thank you for choosing a nice burrito over any of these names, I think it's worth keeping an eye on Castlight Health. Soaring sales and growing margins are two strong traits I like to look for when trying to find a great long-term investment. However, the company is still a bit too risky for my taste, and I've been cut trying to catch too many falling knives over the years, so for now I'm content to to watch the company's progress from the sidelines.