Please ensure Javascript is enabled for purposes of website accessibility
Log In Help Join The Motley Fool
Free Article Join Over 1 Million Premium Members And Get More In-Depth Stock Guidance and Research
By Todd Campbell - Sep 19, 2015 at 7:04AM

Obamacare enrollment is fast approaching and that could help drive shares in Anthem, Community Health, and Cerner Corp. higher.

Obamacare will kick off its third open enrollment period on November 1, and with over 11 million people signing up for health insurance through the Obamacare exchanges last year and more people expected to sign up for health insurance through the marketplaces this year, it could be the perfect time for investors to consider buying companies like these three that are benefiting from an increasingly insured America.

No 1: Anthem (ANTM -4.18%)
Over the past month, a broad market sell-off has created some intriguing buy opportunities in top-tier health insurers, including Anthem, which despite a significant uptick in membership tied to Obamacare has seen its shares lose nearly 15% of its value from its summertime peak.

Anthem makes the lion's share of its revenue selling health insurance plans through employers and via the Obamacare marketplaces and, as a result, it's the second-largest health insurer in the United States. However, if its proposed acquisition of Cigna gets the nod from antitrust regulators, then it will become the biggest national health insurer, and given that extra market share-leading clout could allow it to negotiate lower prices with hospitals, doctors, and drugmakers, Obamacare fueled membership growth should translate into a powerful one-two punch of revenue and margin upside.

This year, Anthem believes that it will insure at least 750,000 more members than it did last year, and if so, revenue will eclipse $78 billion, leading to $10 per share in earnings, up from $8.85 last year. Because Anthem is an industry Goliath and it's trading at a reasonable 13 times next year's earnings, it's one of my favorite Obamacare-related stocks to own.

No. 2: Community Health Systems (CYH -8.23%)
Because an increasingly insured America means fewer uninsured admissions that have to be written off by providers, profit is jumping at hospital operators such as Community Health, which operates 198 affiliated hospitals in 29 states.

Last quarter, Community Health's provision for bad debt totaled $732 million, or 13%, of its $5.6 billion in gross sales. That's a significant improvement from the 13.8% of sales that it stashed away to cover bad debt in 2013 and a big reason why analysts think Community Health's EPS will grow to $4.54 next year, up from $4.08 this year.

The Supreme Court's decision earlier this year to uphold subsidized health insurance should help clear the way for increasingly more people to sign up for insurance this year, especially since penalties associated with not having insurance are set to climb next year. This year, uninsured Americans will be on the hook for the higher of 2% of income or $325 per uninsured adult in their household, up from the higher of 1% or $95 per adult last year. In 2016, the penalty is set to grow to the higher of 2.5% of income or $695 per adult.

That penalty should serve as a pretty big incentive to get insured, and if so, it could translate into a big profit-friendly boost to Community Health, particularly since Community Health added 71 hospitals in a deal valued at $7.6 billion last year.

No. 3: Cerner Corp. (CERN -0.29%)
Obamacare provisions aimed at streamlining healthcare practices and procedures to cut costs include a carrot-and-stick approach to Medicare reimbursement that encourages the adoption of healthcare information systems and those rewards and punishments are resulting in rapid revenue growth for healthcare IT companies, including Cerner Corp.

Cerner's IT systems can expedite scheduling, battle bottlenecks, accelerate payments, and ultimately aid in determining patient care. As a result, the company's sales -- and stock price -- have soared since Obamacare's passage. 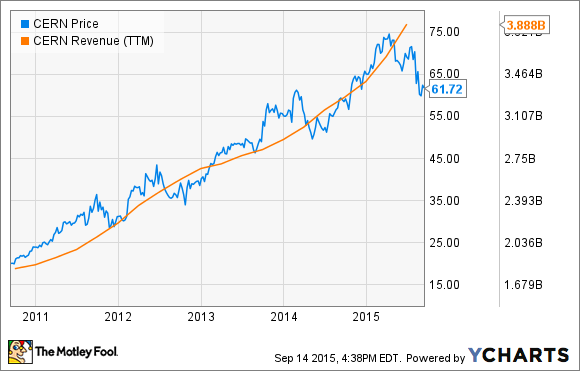 In the second quarter, Cerner's sales jumped 32% to $1.13 billion as the company inked a record $1.29 billion in quarterly bookings and that trend isn't likely to end anytime soon given that providers using healthcare IT systems can share in healthcare cost savings.

In addition to Obamacare bonuses driving demand for its IT solutions higher, Cerner's sales are also about to grow thanks to the Defense Department. This summer, Cerner, along with partners Leidos and Accenture, was awarded a mammoth 10-year, $4.3 billion contract to overhaul the military's healthcare records systems.

Overall, because Cerner has a 10-year compounded annual sales and earnings growth rate of 14% and 22%, respectively, that indicates it knows how to capitalize on opportunities, I think Cerner is positioned nicely to benefit from ongoing Obamacare-inspired demand.