It depends on how likely you think it is that said stock will turn profitable again.

Most Americans probably think of this when they hear "Rolls-Royce." Image source: Rolls-Royce Motor Cars.

Rolls-Royce (RYCEY -3.30%): The name conjures up images of luxury motor cars, flaunted by billionaires and coveted by Saudi sheikhs. But here's something you may not know: Rolls-Royce doesn't even build those luxury cars anymore. (BMW does.)

And here's another surprise: The Rolls-Royce share price today is the furthest thing from "luxury-priced."

The Rolls-Royce you never knew
Rolls-Royce has actually been out of the car-building business since way back in 1973, when it first spun off its car manufacturing operations, and later licensed the Rolls-Royce name to BMW. Established in 1906 with a focus on engine-building, Rolls-Royce today is one of Britain's biggest defense contractors, raking in $21 billion annually, building everything from airplanes, helicopters, and ship engines to submarine nuclear power plants.

In fact, while most famous among consumers for its luxury automobiles, the company has always been a bigger player in the industrial and defense space than in cars. For example, in World War I, Rolls-Royce is said to have produced half the engines used by Allied fighter planes; and in WWII, Rolls Royce engines powered the British Hurricane and Spitfire fighter planes, and a Rolls-designed engine even powered the American P-51 Mustang.

One other thing that might surprise you about the company with the deluxe name: Rolls-Royce doesn't earn a profit. In fact, according to S&P Capital IQ, it racked up losses of more than $180 million over the past 12 months.

As a result, the Rolls-Royce share price today is a whole lot lower than it was just a year or so ago. In fact, take a look at how its share price has fared since, say, the beginning of 2014: 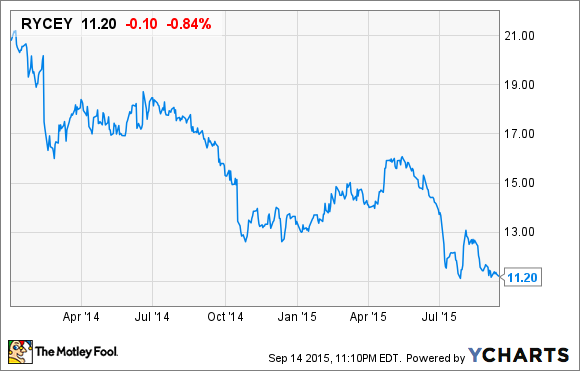 Not exactly "luxurious," is it? From a high of $21 and change, Rolls-Royce has raced straight downhill, losing roughly 47% of its value over the past 21 months. Our Foolish colleagues over at Motley Fool UK tell us much of the damage has been caused by Rolls wasting money on a "£1bn stock buyback, diversification into industries where the company has little experience and a slow transition to new product lines." The upshot is that today, a share of this profitless stock can be had for the bargain-basement price of just $11.20.

But is it worth even that?

Crunching the numbers
Dyed-in-the-wool value investors might be inclined to answer "No." After all, not only is Rolls-Royce losing money today, but analysts who follow the stock expect the company to earn even less (i.e., lose even more) tomorrow. According to S&P Capital IQ estimates, the stock is expected to experience average profit declines of nearly 8% annually over the next five years.

It's also worth pointing out that, while Rolls-Royce may be unprofitable today, it hasn't always been so. In fact, over the past five years, the company averaged profits of nearly $1.7 billion per year. Should it return to past levels of profitability, today's market cap of $20.3 billion would value Rolls-Royce stock at a very reasonable 12.2 times earnings.

Can Rolls-Royce find the gas?
History is all well and good, of course. But Rolls-Royce has had a tough time competing with archrival General Electric and its partners at Safram in selling airplane engines, and that's Rolls-Royce's biggest business segment. Can the company really return to its glory days despite this competition? Maybe, possibly, yes.

One reason to think so: As of H1 2015, Rolls-Royce boasted an order backlog of some $118 billion. So despite competition from GE, Rolls has still racked up more than six years' worth of business. This business is in the bag, and just needs to be executed for the revenues to roll in. At Rolls-Royce's historical average operating profit margin of 9.2%, that could produce more than $10.8 billion in profits for the company. Spread over six years, that would be $1.8 billion annually -- a number almost precisely equal to what Rolls averaged over the last five years.

If Rolls-Royce can win its fair share of engine contracts from the wildly successful airplane industry, the company's fortunes should improve even more going forward. Additional orders to build gas turbine engines for Britain's new Type 26 frigates, due to begin construction next year, also promise to deliver revenue growth to Rolls-Royce.

In sum, while no investment is ever 100% certain, the odds are that we will see a rise in the Rolls-Royce share price in the pretty near future. Down for so long, Rolls-Royce shares are due for a bounce.

Today's Rolls-Royce is less about building luxury cars and more about building gas turbine engines -- like this one, which will power the Royal Navy's new Type 26 Global Combat Ship. Image source: Rolls-Royce.com.

DARPA's LightningStrike Hybrid-Electric Plane Could Be a Stroke of Genius