Are you paying more or less in interest on your credit card than the average American? Find out and see what you can do to lower your lending rate.

To borrow (and modify) a phrase from Dunkin' Donuts, America runs on credit!

Credit cards grow in importance
According to the latest consumer credit report from the Federal Reserve in July, consumers' revolving debt balance increased for the fifth consecutive month to $914.6 billion, up $4.3 billion from the previous month. This represents the highest level of consumer-carried debt since December 2009, and also implies an annualized rate of credit card balance growth of a whopping 5.7%.

Credit cards, in and of themselves, aren't bad news as long as you can afford to make your payments on time and you use them wisely. Unfortunately, this isn't always what happens. A National Foundation for Credit Counseling survey in 2014 discovered that one in five adults couldn't make ends meet without the use of a credit card. Another 22% said that if they were forced to live on cash they would need to make substantial changes to their lifestyles. 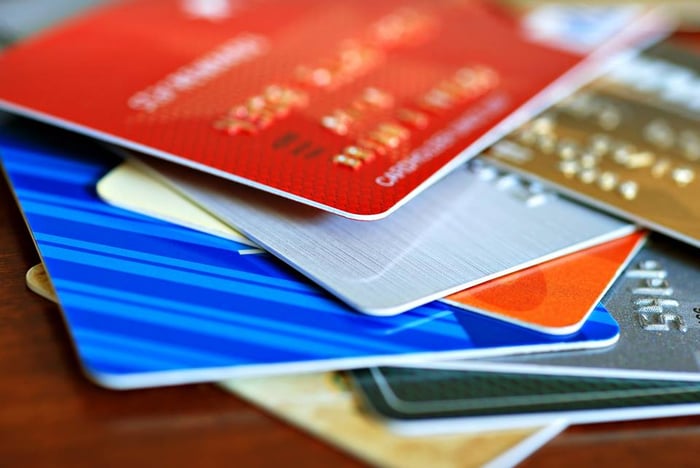 In general, the better payment history you have, and the higher your credit score, the lower the rate of interest you'll pay when you borrow money or obtain a credit card. The opposite is true of people with poor or average credit scores who could be turned down for a loan, mortgage, or credit card, or offered a lending rate that's substantially higher than the national average.

But the rate you wind up paying could differ wildly based on your credit score. CreditCards.com lists low interest credit cards as having a national average lending rate of just 11.62%. On the flipside, credit cards geared toward people with bad credit have an average lending rate of 22.73%! This 11.11 percentage point difference might not seem enormous on paper, but let's utilize a real-world example to show just how monstrous an effect your credit score can have.

As an example, imagine two fictitious people have $5,000 in credit card debt. One has an exceptionally high credit score, and the other individual's credit score is in the poor range. Assuming our fictitious credit card holders made the minimum monthly payments based on the national lending rate averages discussed above for those with excellent and bad credit, the individual with an excellent credit score would have their balance paid off in 10 years and eight months, ultimately paying $2,164 in interest charges. In contrast, the individual with poor credit would take nearly 18 years to pay off their loan, and fork over $7,633 in interest in the process!

How you can improve your credit score
Long story short, you should always be looking for ways to improve your credit score, or maintain it once you reach "excellent" status, which based on the FICO score rating of 300 to 850 is typically anything above a 750. At this level lending institutions should fight for your business, leaving you with the upper hand when it comes to choosing a loan or new credit card.

What steps should you take to ensure your credit score keeps moving higher?

To begin with, making your payments on time is extremely important. CreditCards.com has suggested that your payment history comprises slightly more than a third of your credit score. It's a reminder that you should only be purchasing what you can afford to pay for on a monthly basis.

However, it's worth noting that most credit lenders are willing to work with consumers who run into a hardship, such as the loss of a job or an unexpected financial emergency. You shouldn't assume that your lender is going to forgive your debts necessarily, but it often pays to be upfront with your credit card lender if you are having trouble making your payments. Being proactive can make a major difference to your credit score.

How much credit you use also matters. Generally speaking, credit card lenders get worried when you "max out" a credit card, or rack up big balances on one or more cards. It could demonstrate to a lender that you're either not earning enough to meet your future payments, or that you're an irresponsible spender. Per FICO, the ideal credit utilization rate is 7%, but even up to 20% could be considered OK. If, however, you're using 50% or more of the credit available to you, it may be time to consider paring back your purchases.

Your credit account history length is another factor that affects your credit score. You may have a great payment history and low utilization rates, but it you've only had a credit card for 12 months lenders may be still suspicious of your spending habits. However, if a lender can look back at a decade of spending habits, that lender can paint a pretty accurate picture of what kind of consumer you really are. Plus, if your credit accounts stay open for long periods of time it would likely imply that you're in good standing with your lenders, which is something else that a credit card company would love to see.

Two final factors to consider that can affect your credit score are your credit mix and new credit accounts. In terms of credit mix, lenders like to see that you can handle big and small loans. We're talking about everything from credit cards and revolving loans to mortgages and car loans. If you can handle various types of loans and make your payments on time, then it's likely to be beneficial to your credit score.

On the flipside, opening too many credit accounts can hurt your credit score. While FICO is pretty tight-lipped on what number of credit accounts is just right, the idea here is not to open a new line of credit just to save a few dollars. New credit accounts should only be opened if there's a long-term, financially savvy reason to do so.