Please ensure Javascript is enabled for purposes of website accessibility
Log In Help Join The Motley Fool
Free Article Join Over 1 Million Premium Members And Get More In-Depth Stock Guidance and Research
By Adam Galas - Sep 21, 2015 at 9:05AM

ONEOK Inc. and its MLP are trading at yields signifying that a dividend cut may be imminent. Find out how worried income investors should really be.

The oil crash and market correction have wreaked havoc on the stock prices of many midstream MLPs, with many of these declines being undeserved overreactions. However, the yields of ONEOK (NYSE: OKE) and its MLP, ONEOK Partners (NYSE: OKS), are at their highest levels since the financial crisis, indicating that investors may be expecting imminent payout cuts. 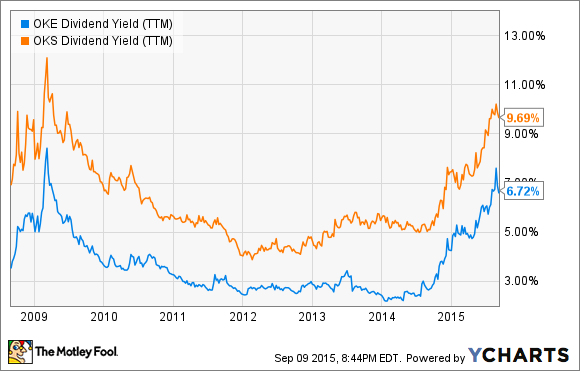 Let's take a closer look at ONEOK's business model to see if those fears are well founded, or whether this is merely an incredible buying opportunity for long-term income investors.

ONEOK's business model: great for distribution growth, but ...
ONEOK operates as the manager and GP of ONEOK Partners -- owning a 2% general partner stake, 39.2% of the limited units, and the incentive distribution rights, or IDRs -- and pretty much all its income comes from its MLP's distributions and fees.

In fact, because of ONEOK's large equity stake and IDRs, 70% of every dollar of marginal adjusted EBITDA from ONEOK Partners flows back to its GP as distributions of one form or another, payments that have been growing at an impressive rate over the past five years. 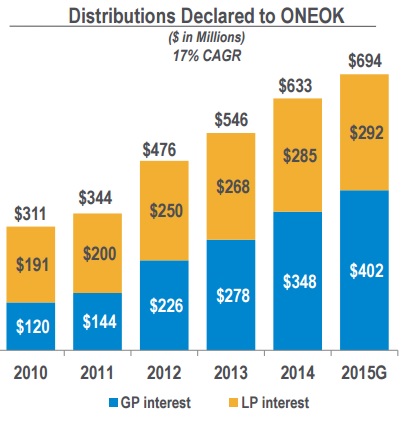 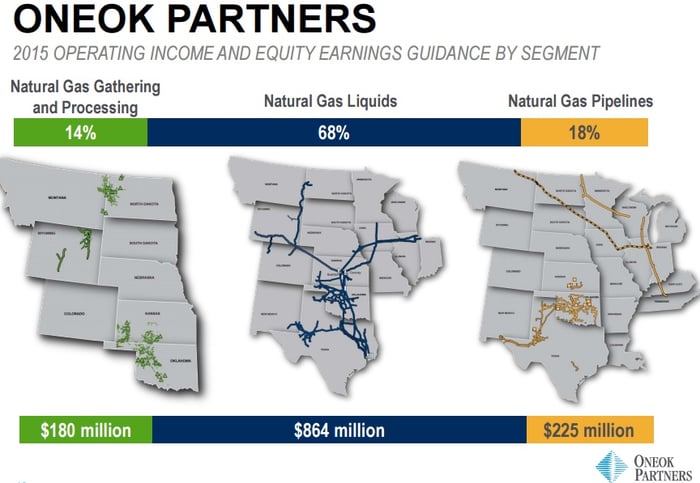 However, this business model also means that ONEOK Inc's dividend safety is linked to its MLP's distributions. That MLP derives 82% of its operating profits from its NGL and natural gas gathering and processing businesses, which is where ONEOK's problems begin.

However, 52% of ONEOK Partners' natural gas gathering and processing margin is derived from percentage-of-proceeds, or POP, contracts, and since natural gas prices have collapsed recently, the MLP's cut of those sales has fallen sharply.

The same is true for its NGL segment, where three of its five businesses are either based on sales of NGLs or price differentials between major NGL hubs such as Conway, Kan., and Mont Belvieu, Texas. Some of these differentials are down by as much as 87% year over year for the first half of 2015.

NGL business is hurting DCF
NGL prices remain in the tank thanks to both a glut of natural gas and condensates from prolific shale formations such as Texas' Eagle Ford. 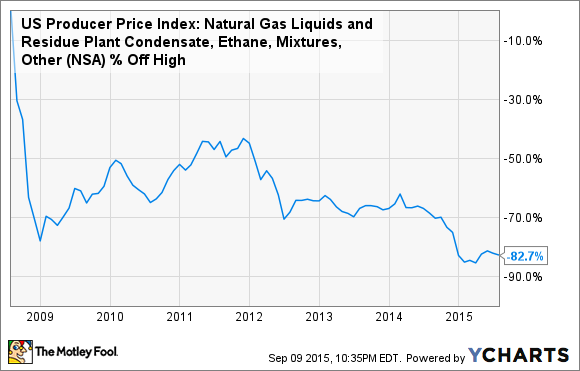 Luckily for ONEOK, a 33% increase in NGL volumes helped to offset the margin declines though its quarterly distribution coverage ratio or DCR still came in at a long-term unsustainable rate of 0.88.

How safe is the distribution?
Because of its high exposure to commodity prices, ONEOK is aggressive in its hedging.

However, those hedges will run out by the end of the 2015, potentially exposing the MLP to even worse commodity-dependent cash-flow declines in 2016. New hedges aren't really an option as they would lock in today's low gas and NGL prices for the next few years.

Despite its commodity margin problems management is guiding for 2015 DCF to remain flat at around $1.17 billion thanks to nearly $3 billion in new projects coming online between Q3 of 2014 and the end of 2015.

Due to a 14% increase in unit counts over the past year, that would put -- assuming no new equity issuances this year -- 2015's DCR at 0.96 , and should prevent the need for a distribution cut this year; assuming management can hit its DCF target.

What about long-term distribution security? 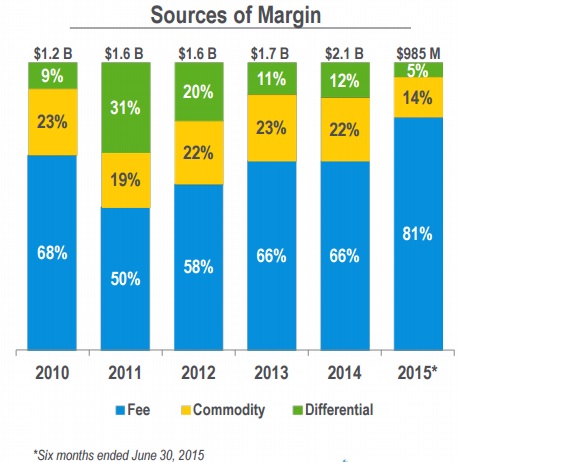 ONEOK's proportion of fee-based margin has been growing in recent years, and management is focused on eventually being able to cover the entire distribution purely with fee-based assets, and it has two main ways to go about it. First, it's renegotiating its NGL and natural gas collection and processing contracts to include a larger fee-based component.

Second, ONEOK is investing around $560 million over the next four years into expanding its 50%-owned Roadrunner and 100%-owned WesTex gas pipelines. When complete, these two systems will transport 900 million cubic feet per day of natural gas from the Permian Basin to Mexico under fixed-fee 25 year contracts.

Takeaway: 2015's payout is probably safe, but ONEOK remains a riskier midstream operator
While I don't think ONEOK is likely to cut its distribution this year, I do believe the higher yield is an indication of its increased commodity exposure and greater risk of payout cuts, should certain energy prices remain low for several years. However, as long as investors are aware of the risk and buy ONEOK as part of a diversified portfolio, I think it does represent a potentially appealing long-term investment.