Please ensure Javascript is enabled for purposes of website accessibility
Log In Help Join The Motley Fool
Free Article Join Over 1 Million Premium Members And Get More In-Depth Stock Guidance and Research
By Anders Bylund - Sep 21, 2015 at 10:20AM

The DVR veteran looks like a tenderfoot patent troll these days. That's no way to run a business for the long term.

I opened a long position in TiVo (TIVO) in November, 2010. This month, I closed it at a minuscule five-year profit. It's not the first time I've toyed with the idea of kicking TiVo out of my portfolio, but the trigger event I envisioned in 2013 never happened.

This time, it's a done deal. TiVo has turned the wrong kind of corner, and the business model now looks unsustainable in the long run. More than that, actually: I actively avoid the kind of company TiVo has become. A healthy innovator turned into a patent troll, leaning on a dysfunctional court system to generate income.

The signs have been appearing for years. Longtime TiVo investors should recall how TiVo used to fight for its life in American courtrooms. Cable and satellite broadcasters saw how nifty TiVo's digital video recorders could be, and how they attracted a new breed of very loyal customers. But instead of ordering up the real thing from the company that invented concepts such as pausing live TV, they turned to low-cost alternatives produced by other consumer electronics wranglers -- often without a TiVo license.

That took the wind out of TiVo's sails when DVR technology was young and fresh. TiVo eventually scored favorable settlements in all of these cases, collecting more than $1 billion in damages and license fees. But it was already too late -- the DVR's moment in the sun had largely passed, eclipsed by Netflix (NFLX 0.58%) and other digital streaming services.

The DVR took some of the frustration out of the traditional TV viewing experience. Can't watch Jeopardy! at 7 p.m. tonight? Not planning to stay up for your favorite late-night talk show? No problem -- you're recording every episode of these shows anyway, and you can enjoy them at your leisure later on.

But that was just the beginning of an even better idea. Netflix doesn't make you wait a week for the next episode of Orange Is the New Black, and there's no reason to set up a tangled web of scheduled recordings. Instead, you get access to entire seasons at once. Grab your favorite Snuggie and a barrel of popcorn -- we're binge-watching Narcos and Daredevil this weekend!

At this point, the DVR is doomed to a long, slow decay. Cord cutters don't need this transitional technology anymore, just as they don't really need DVD or Blu-ray discs either. The future is digital, connected, and ultra-convenient. Netflix isn't the only provider of these game-breaking advantages, but a clear leader in the field.

What TiVo really needed to do -- and what I still envisioned the company doing up until last week -- was to become the best darn content hub on the market. Let's say you have a favorite title in mind to go with this evening's hand-bruised Mint Juleps. But where was it? You just can't recall which streaming service (or traditional broadcast channel, or ripped DVD on your home media server, or...) you'll need to click on in order to get there.

TiVo could be the unifying center of your living room experience. Its latest set-top boxes do a great job of steering you toward the content you want, regardless of the source or publisher. Now, other boxes can do this, too, and TiVo must paddle hard to stay on top. Still, it's a useful and doable function, and TiVo could have hammered out a long-term success story on this platform.

It's not about commercializing TiVo's DVR patents anymore. The new game plan should be to build the best darn content presentation and selection interface the world has ever seen, based on two decades of groundbreaking innovation.

But TiVo has decided to take a different path. Instead of doubling down with a vengeance on its next-generation entertainment platform research, TiVo has filed another patent infringement lawsuit. This time, the target is Samsung (NASDAQOTH: SSNLF). And it's not about the Korean company's streaming-capable Blu-ray players or cable boxes. Instead, TiVo is aiming for the way Samsung's mobile devices are able to display a video while it's still downloading.

The company is stretching its soon-to-expire DVR patents into fields where they shouldn't apply in the first place. The complaints against Samsung make it sound like TiVo invented digital video streams. Again, that's not what the DVR patents are about.

At best, it's a sad "get rich quick" scheme that undermines TiVo's real strengths. At worst, it's a desperate attempt to stay relevant in an industry that's ready to discard the aging DVR idea.

I'm sure TiVo still chips away at its media library and presentation technologies. But the company's R&D expenses have swooned in recent years, especially if you factor in its recently rising revenues: 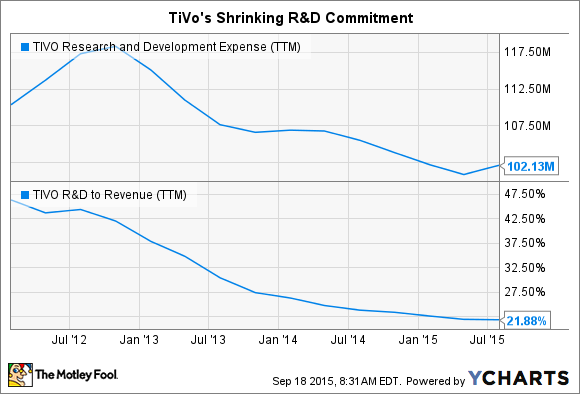 Long story short, the Samsung suit was the final straw for me. I have no patience for patent trolls, and TiVo is showing all the classic signs of a troll in training. With weak R&D efforts, the latest patent suit seems greedy or desperate, and the company has better things to focus on.

If I'm wrong, I'll miss out as TiVo grows into a respectable content organizer at the very heart of the booming all-digital entertainment industry. That would be a lucky break for whoever bought my bundle of TiVo shares, but I'm sufficiently convinced that TiVo is heading down the wrong road.

The deed is done. Good night and good luck, TiVo -- the entertainment industry and consumer experience will be much better off if I turn out to be wrong about you.