Please ensure Javascript is enabled for purposes of website accessibility
Log In Help Join The Motley Fool
Free Article Join Over 1 Million Premium Members And Get More In-Depth Stock Guidance and Research
By Daniel B. Kline - Updated Nov 23, 2018 at 4:56PM

Here's why you should go to a store to make the change rather than try to do it online or over the phone.

Sprint (S) has been my mobile phone provider since well before there were smartphones.

I've been with the company through the days when the Motorola StarTac flip phone dominated through various Palm handsets, half a dozen or so BlackBerrys, at least two devices with slide-out keyboards, and for the past few years various Apple (AAPL 4.08%) iPhones. It was a bumpy relationship where I threatened to leave more than once but always reconciling because of a combination of having unlimited data and being stuck in the two-year contract cycle.

It was not a perfect arrangement and there were frequent billing problems, the occasional confounding lack of service, and a bill that inched ever higher. Still, it was a relationship that began slightly before my ongoing 15-year marriage, and mostly things were pretty good.

The network wasn't perfect with fairly patchy service at my home address and a barely existent signal at my family home in semi-remote New Hampshire. Mostly, however, it wasn't bad service or even major dissatisfaction that got me to leave, it was -- as it so often is in relationships -- the siren song of another suitor. 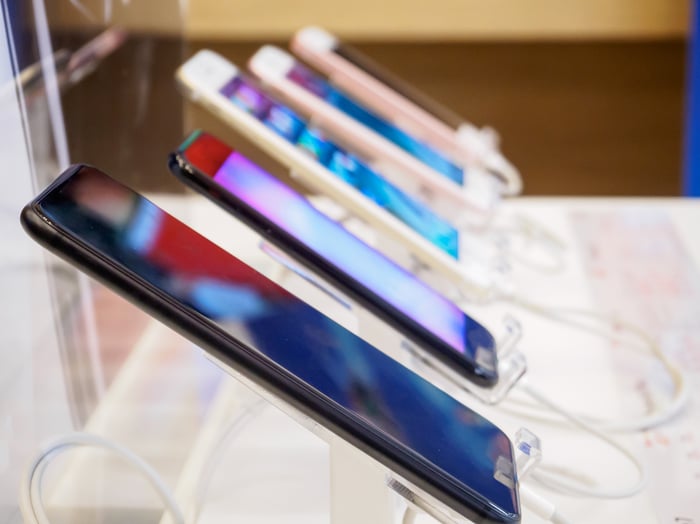 Why am I going to T-Mobile

In the past year, T-Mobile (TMUS 1.03%) has made major strides on the semi-annual RootMetrics Mobile Network Survey. While it's still the fourth-place network, its current scores are superior to the ones placed by the industry leaders in the previous year.

In addition to the improving network I also believe what CEO John Legere says about his company's continued improvement efforts, which he detailed in a recent blog post.

We have been rolling out truckloads of new spectrum that carries our LTE signal twice as far from our towers, for a massive coverage expansion, and works four times better in buildings.  We call it T-Mobile Extended Range LTE − also known as "Band 12" or "700MHz spectrum" − and we've been lighting it up at break-neck pace. It's already live in 170 markets and covers more than half of all Americans.  That means our total LTE network now reaches OVER 290 MILLION AMERICANS  (in case you've lost count, that's just about everyone...there are 320 million people in this country in total).

Though he uses a lot more bold typeface than any media professional would endorse, Legere, unlike many CEOs, almost always backs up his boasts. He might be arrogant and a little brash, but he doesn't lie. So when he says the new iPhone will take advantage of the T-Mobile's added LTE capabilities, that was enough for me.

In addition, switching to T-Mobile will save me a little bit of money over my current Sprint deal. I'm moving my phone and my wife's line to T-Mobile paying off whatever time is left on my two-year contract. We'll be taking advantage of special promo lease pricing with the ability to upgrade our phones three times a year.

Sprint did have a cheaper lease deal on the new iPhone, but it was a pure lease whereas T-Mobile's $20-a-month iPhone 6s and its $24-a-month iPhone 6s Plus deal come with an option to pay off the phone (for less than full retail) after 18 months.

I might have been able to get my Sprint bill lower than my new T-Mobile bill, but I wasn't willing to give up having at least the possibility of paying off the phones. That's largely because while I may upgrade once a year or even more, my wife might be willing to wait years between new phones.

My initial attempt to secure the special lease deal over the phone was a disaster. The sales rep was not aware of the 18-month-lease promotion and took my order as if it were a straight two-year financing deal. He said I would be credited for each month for the lower price, but when I called the next day to switch from two iPhone 6s models to an iPhone 6s and an iPhone 6s Plus, that sales rep told me everything was wrong.

It took being transferred multiple times and nearly two hours on the phone to learn that the special lease was not being offered over the phone. That led me to cancel my order, contemplate not switching at all, and then ultimately go to a T-Mobile retail store.

The experience in the store was the exact opposite. The rep knew exactly what I was talking about and helped me through the ordering process with a minimum of fuss. I was a little frustrated that the deal was $10-for-each-line more expensive than I had expected because the promotion does not include insurance. But even with that added expense, it still came in a little below my Sprint monthly payment, with the added ability of being able to switch phones multiple times a year.

Before I left the store, I was handed paperwork that explained exactly what would happen when my new phones arrived and I was ready to make the switch. It was more of an odyssey than I had hoped for, but everything that went wrong on the phone was made up for by the excellent in-store service.

T-Mobile also has a strong understanding of what questions customers who are jumping from another carrier will need answered and the in-store sales rep had answers ready and handouts that covered all of my questions. Switching was not a perfect experience but for a small amount of hassle I'm now saving a little bit of money without a contract, and with the ability to switch devices multiple times a year.

That's a small victory and a leap I'm comfortable making knowing that if Legere's company fails to deliver, Sprint will take me back no questions asked.