Please ensure Javascript is enabled for purposes of website accessibility
Log In Help Join The Motley Fool
Free Article Join Over 1 Million Premium Members And Get More In-Depth Stock Guidance and Research
By Michael Douglass - Sep 23, 2015 at 9:04AM

Much speculation has swirled around what Gilead Sciences (GILD 1.08%) is going to do with its $14.7 billion in cash. While M&A speculation is always rampant in the biotech space, Gilead has been in the spotlight lately with rumors that it may purchase another company.

After all, the company is minting money from its Hepatitis C blockbusters Harvoni and Sovaldi, and massive HIV lineup. Gilead generated $5.7 billion in operating cash flow last quarter, and its cash dividend and share repurchases only combined to cost $1.53 billion.

The company just priced out $10 billion of senior notes. That gives Gilead $24.7 billion in cash firepower to use when you include the cash it already had on its books. So, what is Gilead planning?

Gilead intends to use the net proceeds from the offering for general corporate purposes, which may include the repayment of debt, working capital, payment of dividends and the repurchase of its outstanding common stock pursuant to its authorized share repurchase program.

If share repurchases were all Gilead planned to do with its cash hoard, I'd argue that would be a good use of resources. After all, the company is undeniably cheap compared to peers on both a trailing price-to-earnings, or P/E, basis: 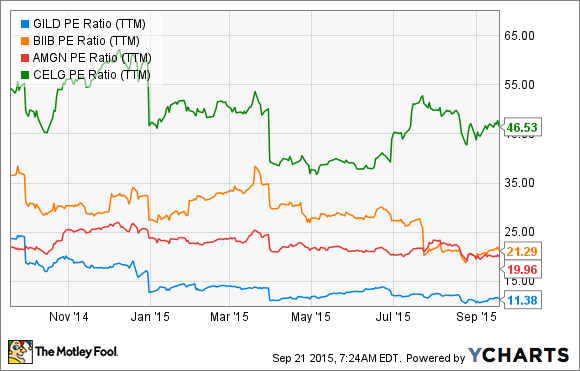 And a forward one, too: 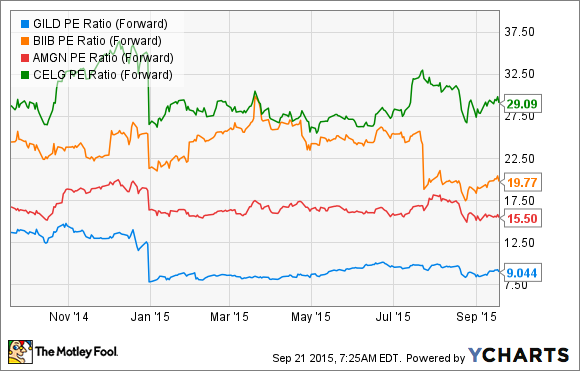 Now, Gilead has the firepower to complete those share repurchases in one fell swoop. So far, it's spent $900 million of the $15 billion for repurchases that the board authorized in February to be spent over the next five years. Now it can clear through the remaining $14.1 billion, over 4 years early, and buy up a bunch of stock while it's cheap. And it will still have a nice cash cushion of more than $10 billion.

Why would Gilead need $10 billion more to make that happen? It already has more cash -- $14.7 billion as of the end of Q2 -- than the remaining share repurchase program would cost. Historically, the company has been cash-flow positive in the third quarter of each year, so it's not like it needs to stockpile the money for a bridge to the fourth quarter:

Nope, I can only think of one legitimate reason Gilead would need all of that money: I believe Gilead is about to buy another biotech.

Why M&A?
There's another reason everyone (me included) is hoping that Gilead will buy something, and why I think it's expanding its cash position to make that happen: Gilead is really, really good at buying other companies. Management has had a stunningly good run with purchases, with two deals standing head-and-shoulders above the rest: Triangle Pharmaceuticals in 2003 and Pharmasset in 2012.

Gilead's purchase of Triangle for $464 million yielded emtricitabine, which is present in most of its $10-billion-per-year HIV cocktail portfolio. Gilead's $11 billion Pharmasset purchase gave it Sovaldi, which churned out more than $10 billion in 2014, its first year on the market. Sovaldi is also part of the Hepatitis C combo drug Harvoni, which is likely to bring in more than $10 billion in sales in 2015, its first full year on the market.

While I might quibble with the numbers -- I think Gilead's pipeline has more upside than that, with analysts estimating that recently approved cancer drug Zydelig alone might bring in as much as $1 billion in peak sales a few years down the road -- the fact of the matter is that Gilead's growth looks likely to slow after an explosive couple of years resulting from the Sovaldi and Harvoni approvals. So it makes sense for Gilead to reignite that growth with an acquisition to further bolster its pipeline.

Fortunately, the company has given us some clues as to what it's looking for.

Size, or the lack thereof
At the Morgan Stanley Global Healthcare Conference, Morgan Stanley analyst Matthew Harrison made an interesting comment to Gilead President and COO John Milligan about Gilead's size (this and other quotes courtesy of S&P Capital IQ):

You have a market cap that's similar with some of these large-cap companies like Merck... and you have about 7,000 employees, I think, and they have, take Merck, for example, they have 77,000 employees.

This led to a question about whether Gilead wanted to get Merck-sized internally. Milligan pulled no punches in his response: "I hope that, in my lifetime, we never look like Merck in terms of the people and processes."

Aside from being an impressive zinger, this tells us a great deal about Gilead's planned acquisition strategy: The company is not looking to swallow a big pharma. No merger of equals, no grand deal. Gilead intends to remain "young, entrepreneurial... able to make decisions incredibly fast when things change" (to quote Milligan again). I think you can safely write-off any speculation to the contrary.

Which disease areas?
Milligan was also recently asked whether, like the Triangle and Pharmasset acquisitions above, Gilead was only looking to buy a company in a disease area in which it already has a presence. Milligan's response was interesting: "In the spirit of the board wanting us to be open-minded, I guess, I'll say no." But he then commented that being in the disease space already "makes it a lot easier" and helps the company "discriminate among the various options that you might have."

I would speculate that that essentially means, "yes, we probably would prefer to be in the disease space we're looking to buy in." Which makes sense -- test drive the car before you buy. That limits the possibilities a bit -- Gilead's pipeline includes drugs targeting cancer, inflammation, respiratory and cardiovascular issues, liver diseases, HIV, and blood diseases.

Milligan noted earlier this year at the Goldman Sachs Healthcare Conference that Gilead hopes to find something to weld a particular portfolio together.

What this means for us
I'm not going to speculate on whether Gilead is planning to buy one particular company over another. I think it's bad investing practice to buy shares of a company because you think another company's going to buy it out, and frankly, there are a lot of ways Gilead can approach inorganic growth.

But if Gilead ends up buying a company (and I think it will, sooner rather than later, particularly given this recent debt offering), you'd do well to ignore whatever happens to the stock price and think about the long-term opportunity Gilead sees with that biotech. If history is any indicator of future success, betting against management is a bad move.