Baidu developed Duer by indexing data and reviews from vendors across multiple industries, which helps it answer specific questions about businesses. For example, if a user wants to find a good restaurant that allows pets, Duer figures out which businesses allow pets by reading reviews, then recommends the one with the highest rating. Baidu will integrate Duer into its Mobile Baidu app for iOS and Android.

Baidu has also integrated its AI platform into a cute robot, which gives Duer a physical presence in homes. The device is similar to Amazon's Echo, its cloud-based smart speaker that passively waits for commands, search queries, or product orders. During a recent demo, Baidu used the Duer Robot to order two lattes.

What Duer means to Baidu
Like Google, Baidu has evolved from a search engine into a sprawling cloud-based ecosystem of apps and mobile services. Just like Google, Baidu faces the threat of e-commerce giants pulling traffic away from its ecosystem, which reduces the number of ads it can display and the amount of data that it can gather for ads.

That's why Baidu is building an "O2O" (online-to-offline) platform that enables its users to order products and services directly from the Mobile Baidu app. It's a more streamlined e-commerce approach than Google's approach with online storefronts for brick-and-mortar partners and "buy buttons" on ads. To strengthen its O2O presence, Baidu announced in June that it would invest $3.2 billion in Nuomi, its group-buying service, over the next three years. Nuomi helps users find deals on movie tickets, restaurants, hotels, and more. By integrating Duer with this system, Baidu users can accomplish a lot with just one app -- eliminating the need for third-party sites and apps.

Unfortunately, Baidu's not the only company trying to corral vendors into a single app. Internet giant Tencent has been leveraging the popularity of its WeChat and QQ messaging platforms to expand its O2O presence as well. According to CFO Jennifer Li, Baidu's O2O penetration remained in the "low single digits" at the end of last quarter. To gain more ground, Baidu boosted its O2O investments, which reduced operating margins by over 25 percentage points and caused operating profit to dip 2.5% annually last quarter.

What Duer means for everyone else
As the top search engine in China, Baidu is naturally the first choice for search queries on iOS and Android devices. That's why mobile revenues accounted for half of its top line last quarter. Over 70% of smartphones in China run on Android, according to Kantar, which will help Duer reach more users that the iOS-exclusive Siri. Yet Duer and Siri aren't direct competitors, since Siri actually uses Baidu as its default search engine in China. Google Now, Baidu's largest potential competitor, remains blocked across mainland China. 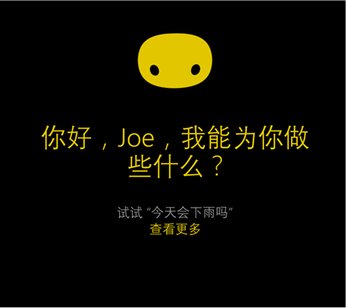 This means Duer's only direct competitor is Microsoft's (NASDAQ:MSFT) Cortana, which is expanding beyond Windows Phones to iOS and Android devices. Cortana, which is known as Xiao Na in China, processes its searches through Bing, which isn't blocked in China.

Yet Xiao Na definitely faces an uphill battle in China -- Bing only processed about 1% of Chinese searches last year, according to tracking site CNZZ, versus 54% for Baidu. Windows Phone has also been marginalized by Android and iOS in China, so most mobile users likely never used the native version of Xiao Na before.

The key takeaway
Pulling all its search and O2O services together with Duer is a smart move for Baidu. It keeps businesses and users locked within its mobile ecosystem, which can help it catch up to market leaders like Tencent.

When it releases the Duer Robot to mainstream consumers, the virtual assistant can gain a physical presence in homes and businesses as an all-in-one device for ordering products and goods, conducting cloud-based searches, or performing other tasks. If all goes well, Baidu can avoid losing the e-commerce market to third-party apps or popular messaging services like WeChat. It's basically what Google should have done years ago as a defense against Amazon.