With the Dow Jones Industrial Average still in correction territory and the market making triple-digit moves daily, it may seem like a scary time to be an investor. While corrections and volatility can certainly be unsettling, they aren't cause for panic. In fact, the world's most successful investors welcome market weakness, and use the opportunity to seek out good investments at cheap prices. Here's a lesson from two of the world's best investors that can help you put today's market in perspective.

We've all heard the saying "buy low, sell high," but the reality of investing is quite different. When the market is booming, people see everyone around them making money, get greedy, and buy in when stocks are expensive. When the market takes a nosedive, investors become fearful of losing even more money and sell when prices are low.

This "buy high, sell low" reality is the reason that the average investor only achieved 2.5% average annual returns over the past 20 years, while simply putting money into an S&P 500 index fund would have produced nearly four times that rate of return.

The most successful investors know that to make real profits over the long term, you have to do the opposite of what the crowd does. One of Warren Buffett's most famous pieces of advice is to "be greedy when others are fearful, and fearful when others are greedy."

Billionaires such as Buffett and activist investor Carl Icahn have made billions of dollars buying stocks when everyone else is selling. For example, Buffett invested $5 billion in Bank of America in 2011, and his investment has nearly tripled since then. Icahn bought a 10% stake in Netflix in late 2012 when the stock was trading for roughly one-tenth of its current value. These investors (and others like them) are able to find hidden value when everyone else is only thinking of reasons to sell.

The good news is that you can do the same. Take a look at a few of Buffett and Icahn's recent buys and the reasoning behind each.

What are billionaires doing now?
Both Buffett and Icahn have made some pretty big moves lately, and not surprisingly, they have all been in energy stocks, which have plummeted this year. Granted, some companies have dropped for a good reason (high debt, cash flow problems, and so on), but there are some that still have a bright future ahead.

For example, Buffett just increased Berkshire Hathaway's (NYSE:BRK.A) (NYSE:BRK.B) stake in Phillips 66 (NYSE:PSX) to 58 million shares -- approximately 10% of the company. When asked why he decided to buy, he gave a surprisingly simple answer. He didn't buy Phillips 66 because he wants a piece of its refining business or chemicals business. Instead, he simply said he likes the company and its management. Combined with a low P/E (10 times earnings), a strong balance sheet, and little debt, it's a classic Buffett investment.

Buffett has said "It's better to buy a wonderful business at a fair price than a fair business at a wonderful price." There are oil and gas stocks that have fallen more dramatically than Phillips 66, as you can see in the chart below. However, Buffett believes it is a great business, and jumped at the chance to buy it cheaply on sector weakness. In addition, Buffett mentioned in a recent interview that Berkshire plans to spend about $32 billion buying stocks in the next four to five months, implying that he sees tremendous value in the market now. 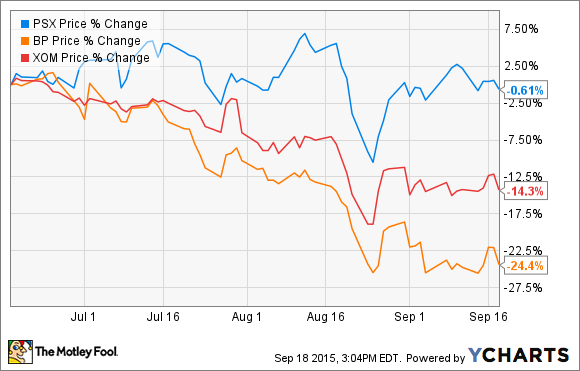 Icahn, on the other hand, tends to take a different approach. He finds companies that he perceives to have hidden value, and then actively encourages those companies to unlock some of that value. Recently, Icahn built an 8.5% stake in Freeport McMoran (NYSE:FCX) after the drop in commodities prices caused shares to plummet by 70% over the past year. The company has been cutting expenditures, and has substantial oil reserves. In fact, shares are trading for just 80% of the value of the company's tangible assets as I write this.

Icahn also decided to add to his stake in Cheniere (NYSEMKT:LNG), feeling that the company is undervalued. Icahn's initial stake allowed him to secure two board seats, and his investment could pay off nicely if Cheniere's plan to become the first U.S. company to export liquefied natural gas comes to fruition.

So, what should you do?
Now, I'm not saying that you should run out and buy Phillips 66, Freeport McMoran, or Cheniere simply because Buffett and Icahn did. However, I must admit that I'm rather tempted to jump into Freeport right now at the current fire-sale price, and you can buy any of the three stocks mentioned for even less than our billionaires paid. Instead, what I'm saying is that you should apply these principles to find some bargains of your own.

Look for companies with strong balance sheets, cheap valuations, and good management that happen to be trading cheaply due to bad market conditions. There are plenty of bargains to be found, if you're willing to do some homework.

The proof is in the performance
It is precisely this type of behavior that has allowed Berkshire Hathaway to deliver market-beating performance for such a long time. 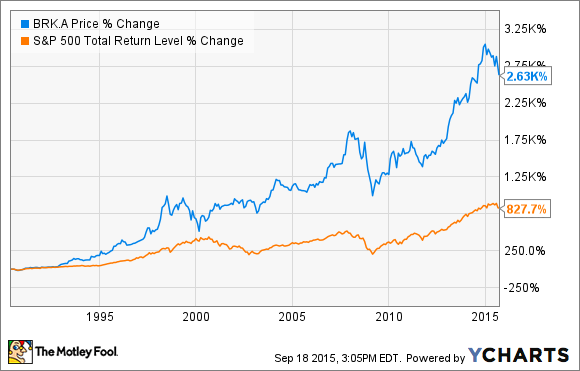 To illustrate just how good Buffett is at capitalizing on the bad times, consider this. Over the past 50 years, the S&P 500 finished a year in the red 11 times and Berkshire outperformed the market in nine of them. In fact, there have only been two years since 1964 when the company failed to grow its book value -- in 2001, right after the tech bubble burst, and 2008, when the financial crisis hit.

I'm not saying that by approaching market corrections wisely you'll be able to match Berkshire's long-term average return of 21.6%, but you can certainly give yourself a strong advantage by following Buffett's principles.