Please ensure Javascript is enabled for purposes of website accessibility
Log In Help Join The Motley Fool
Free Article Join Over 1 Million Premium Members And Get More In-Depth Stock Guidance and Research
By Todd Campbell - Sep 23, 2015 at 8:21AM

Biosimilar drugmakers and pharmacy benefit managers may enjoy upside even if price controls are instituted on medicine. 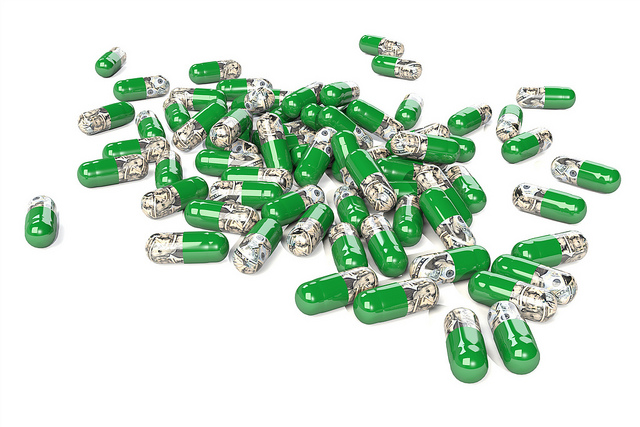 Hillary Clinton made waves this week when she announced her strategy for reining in sky-high drug prices. The strategy, which includes a mix of reforms designed to prod drugmakers to reimagine pricing, led to a significant sell-off in biopharma, lopping an estimated $40 billion in value off the industry on Monday alone, according to Bloomberg.

However, Clinton's strategy -- if it were to become a reality -- won't imperil all healthcare stocks. In fact, some healthcare companies, such as Pfizer (PFE 1.00%) and Express Scripts (ESRX), could end up coming out ahead. Here's why.

Bolstering biosimilars
At the heart of Clinton's plans is one simple premise: Keep costs in check. And of all the things that could help her deliver on that goal, none may be more successful than embracing generic alternatives to high-priced biologic medicines, commonly referred to as biosimilars.

Historically, complex biologics that are created in living cells have been insulated from the threat of generic competition because they're too hard to copy and too costly to create. As a result, biopharma companies have enjoyed a longer-than-expected monopoly in their respective markets; however, that could be changing.

Because the passage of the Affordable Care Act led to a clear-cut FDA pathway for the approval of biosimilars, Novartis won FDA approval for its biosimilar alternative to Amgen Inc..'s billion-dollar biologic anemia drug Neupogen earlier this year, and that drug hit pharmacy shelves this month.

It's not clear just how much money biosimilars like this one will save healthcare payers, but in the future it could amount to billions of dollars per year.

In Europe, where they've been available for years, biosimilars fetch prices that are roughly 30% lower than their brand-name counterparts. Given that healthcare research firm IMS Health projects $221 billion will be spent on biologics in 2017 alone, a lot of money could soon be up for grabs as biologics come off patent and biosimilar drugmakers, including Pfizer, line up to capture market share.

Hospira already markets three biosimilars in Europe that could conceivably win approval in the U.S., and following the acquisition, Pfizer has five biosimilars in clinical trials that could reach the market in the next five years.

If pressure to reduce prices translates into even greater support for biosimilars, then Pfizer could be perfectly positioned to capture a big chunk of what it expects to be a $20 billion market by 2020.

Happily sitting in the middle
Drug companies are on the hot seat for their prices and changes from Clinton could rein in their profit, but biopharma isn't the only healthcare industry that could feel the sting of price reform.

Clinton's plan aims to cap patient out-of-pocket spending at $250 per month, or $3,000 per year, and that could jeopardize margins at health insurers if they have to make up for any shortfall.

A squeezing of biopharma and insurance companies could end up being good news for Express Scripts, a pharmacy benefit manager.

Express Scripts contracts with health insurers and other payers to manage their drug programs, and its services include negotiating prices with drugmakers, boosting the use of generic drugs, helping patients take their medicine as prescribed to avoid costly hospitalizations, and analyzing data to find drug-related cost-savings.

Because Express Scripts has long been sounding the warning bell of higher prices and is already a market leader with over $100 billion in annual sales, it could solidify itself as the go-to player in the industry. If so, then Express Scripts shares, which are currently trading at less than 14 times next year's EPS, could be a bargain.

Looking ahead
No one knows if Clinton's drug-pricing schemes will ever see the light of day in Congress, but there's overwhelming public support for tackling high-priced medicine. According to a recent survey by the Kaiser Family Foundation, 72% of Americans believe drug prices are unreasonable and 73% believe that biopharma companies' profits are too high.

That kind of support suggests that drug prices will remain a key topic for discussion throughout the election-year cycle, but that doesn't mean investors should abandon healthcare stocks. Instead, investors ought to consider the long-term opportunities tied to an increasingly larger, longer-living, and insured population. Over time, those trends are likely to be far more important to healthcare investors than political posturing during an election year.