Please ensure Javascript is enabled for purposes of website accessibility
Log In Help Join The Motley Fool
Free Article Join Over 1 Million Premium Members And Get More In-Depth Stock Guidance and Research
By Brian Feroldi - Sep 24, 2015 at 11:44AM

Shares of the beaten-down biopharmaceutical company bounce back on the heels of an overseas approval. What does this news mean for long term investors?

Keryx Biopharmaceuticals (KERX), a drug developer with a focus on treating renal disease, treated investors to some good news this morning. The company announced that the European Commission has officially approved Keryx's drug Fexeric for control of serum phosphorus levels in patients with chronic kidney disease.

The approval allows Keryx to target patients both patients that are on dialysis as well as patients in the pre-dialysis stage, which is a label that Auryxia, the brand name of the same drug that is sold in the U.S., does not have.

In the release John Neylan, M.D., Keryx's chief medical officer, had this to say:

"With Fexeric's broad label, nephrologists have a new, well-tolerated, and effective phosphate binder to control hyperphosphatemia as the patient progresses through the late stages of CKD and into dialysis."

The market opportunity in Europe looks to be quite large; the company estimates that in the 5 biggest European markets an estimated 1.3 million people have been diagnosed with chronic kidney diseases, and about 750,000 of them have hyperphosphatemia.

Thanks to the wider labeling indication in Europe, those numbers are actually higher than the current addressable market in the U.S., as Auryxia is currently only indicated for patients with hyperphosphatemia and phase 5 end stage renal disease who require dialysis. The more restrictive stateside labeling whittles the addressable market down to about 450,000 patients in the U.S., though Keryx is certainly seeking to expand the label to allow Auryxia to target patients with chronic kidney disease who are currently in pre-dialysis.

The waiting game continues
While this approval is certainly welcome news, Keryx investors will still have some waiting to do before they will see any revenue from Europe, as the company has yet to announce its marketing strategy for Europe.

"We continue to work with potential partners regarding commercialization in the EU, and expect to finalize our commercial strategy by the end of 2015."

This statement makes me think that the company is still debating whether it makes more sense to sell directly into Europe or if they want to set up a local partnership. If I had to guess, I'd probably say that they'd go the partnership route, as they've already done so in another overseas market.

In January 2014, Auryxia was approved in Japan to treat patients with all stages of chronic kidney disease, and in the country it is sold under the brand name Riona. The company chose to go the partnership route in the country, and the drug is currently being sold by Torii Pharmaceutical, which is a division of Japan Tobacco. Year to date, Keryx has generated $1.5 million in licensing revenue from the deal.

A bottom in sight?
Regardless of the near-term revenue implications, Keryx investors certainly have reason to cheer this news, as ever since Auryxia launched for sale earlier this year in the U.S. the stock has been a tough one to own. Shares are down more than 70% year to date and now trade in the mid-single digits. 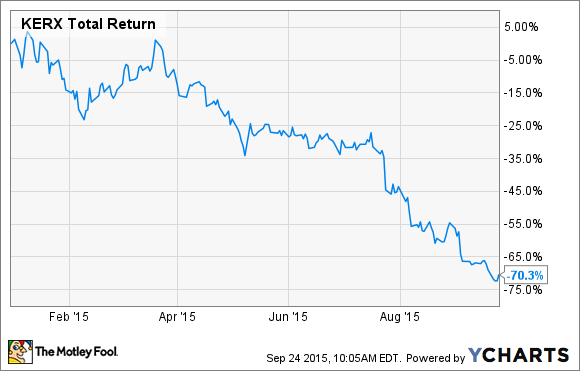 Today's news caused the stock to pop a bit, and I'm sure that long-term Keryx bulls have their fingers crossed that this news marks the end of the stock's downward movement. While it's impossible to tell ahead of time if that is the case, short-sellers have been piling into this name all year based on disappointing early results for Auryxia, so if the company can successfully diversify its revenue into Europe, the bears may start to hibernate. We will see soon enough it that's the case.

Keryx's stock has been hard to love this year, but today's announcement should give investors a reason to be optimistic about the company's future. However, until we see signs that Auryxia can get its mojo going in the U.S., I'm content to watch this name from the sidelines.