Please ensure Javascript is enabled for purposes of website accessibility
Log In Help Join The Motley Fool
Free Article Join Over 1 Million Premium Members And Get More In-Depth Stock Guidance and Research
By Tyler Crowe, Jason Hall, and Matthew DiLallo - Sep 25, 2015 at 8:05AM

Mergers and acquisitions are starting to make their way into the energy space lately, but what will the next big merger be?

Over the past year or so, we've seen a small handful of large deals in the energy space. Despite the growing list of companies that are pairing up, though, there is a sense that there are still lots of deals left to be made. After all, cheap oil and gas is wreaking havoc on some companies' balance sheets, and bigger names in the space will need to grow somehow over the next few years.

So we asked three of our energy contributors to put on their soothsayer hats and tell us three potential deals they see coming in the near future. Here's what they had to say.

Matt DiLallo: Just for fun, I'm going to propose a deal that just makes a lot of sense on paper. I think Hess (HES 0.59%) should buy Oasis Petroleum (OAS). Here's why.

Hess spent the past couple of years transitioning itself from an integrated oil company to a pure-play independent. That shift saw the company shed its gas stations, storage terminals, and more recently its Bakken midstream assets while holding on to its core oil and gas assets. One of the results of this transition is a company that possesses a balance sheet that is the envy of the oil patch, as it has $3 billion in cash and $8 billion of total liquidity to go with a net debt-to-capital ratio of just 8%. That strong financial position is combined with solid offshore assets in places like the Gulf of Mexico as well as a strong U.S. onshore position where Hess possesses more than 600,000 acres in the core of the Bakken Shale.

While Hess necessarily doesn't need to bolster its Bakken position, it still could take advantage of the current market to create a real Bakken shale powerhouse if it bought Oasis Petroleum. Aside from just bolstering its position, the real driver of such a combination would be cost savings not just from merger synergies, but from employing Hess' lean manufacturing process on Oasis' acreage to drive drilling costs down even further. That's what makes the combination so compelling as Hess really could extract a lot more value out of the position than Oasis could if it remains independent.

Tyler Crowe: I know I'm speculating here, because there haven't been any rumors indicating anything of the sorts. But I think it's possible in the next couple of months that we'll see some consolidation in the offshore rig industry. It's a bridge too far to say that Company X will acquire Company Y, but here are some reasons the landscape for offshore rig consolidation looks very possible.

Well-financed industry leaders flush with cash: Not every company is in as great of shape when it comes to financial strength, but a couple of the larger players in the space have sizable piles of cash on hand that are more than enough to cover any short-term liquidity issues as well as enough earnings power even today to service existing debts, as well as potentially take on some more to finance an acquisition:

Contracted rigs the most valuable currency in the industry: With demand for rig work waning and an excess of rigs on the market, building new rigs just doesn't look like the most effective deployment of capital right now. However, buying a rig or two that is already contracted out well into the future would be a great way to grow cash flow today at a much lower risk than a straight-up newbuild.

Smaller companies with great fleets at bargain-basement prices: A lot of new offshore rig companies popped up in recent years with new fleets of rigs and got some pretty attractive long-term contracts for them. However, they took on debt loads that were too much for them to handle. So today, a small handful of these companies are currently trading at price-to-tangible book value ratios of less than 0.15 -- basically less than 15 cents on the dollar for their assets. The Transoceans or Enscos of the world could probably absorb these debt loads and could even renegotiate that debt for better rates, so they could get some fleet additions with decent contract coverage at a major discount.

I can't say for certainty that this will happen, but the opportunity for a company like Transocean or Ensco to buy some struggling peers is there, and they could even pay a market premium today while still only paying pennies on the dollar for new rigs.

Jason Hall: Frankly, it's been surprising how little merger-and-acquisition activity has taken place in the oil patch this year, as commodity prices approach a yearlong malaise that has many oil producers and companies closely tied to production face major struggles.
With the recent bankruptcy filing by Samson Resources, one of the largest privately held oil companies in the U.S., I think we could see M&A activity ramp up in coming months. Frankly, the Samson bankruptcy -- which was a pre-arranged and negotiated one with creditors -- won't be the first or even the biggest by the time oil prices recover.
And I think BP (BP 0.88%) is likely to be active. BP is facing plenty of struggles of its own, but the company has a massive pile of cash on hand: 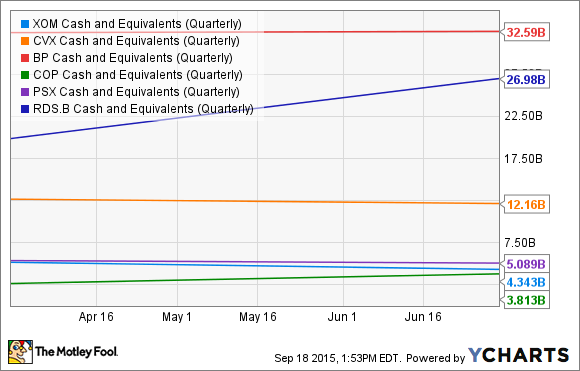 It also has more debt than any of its peers, but the reality is, there are probably going to be some great opportunities to pick up struggling independent producers with great oil and gas assets for very attractive prices in coming months.

Considering the challenges BP has dealt with over the past several years, I expect management to make a bold move and buy at least one struggling U.S. independent oil producer, especially if it can get its hands on oil and/or natural gas plays with low cash production costs. I don't think management will make a risky bet, but I do think they'll be willing to pay more than other majors at this stage.